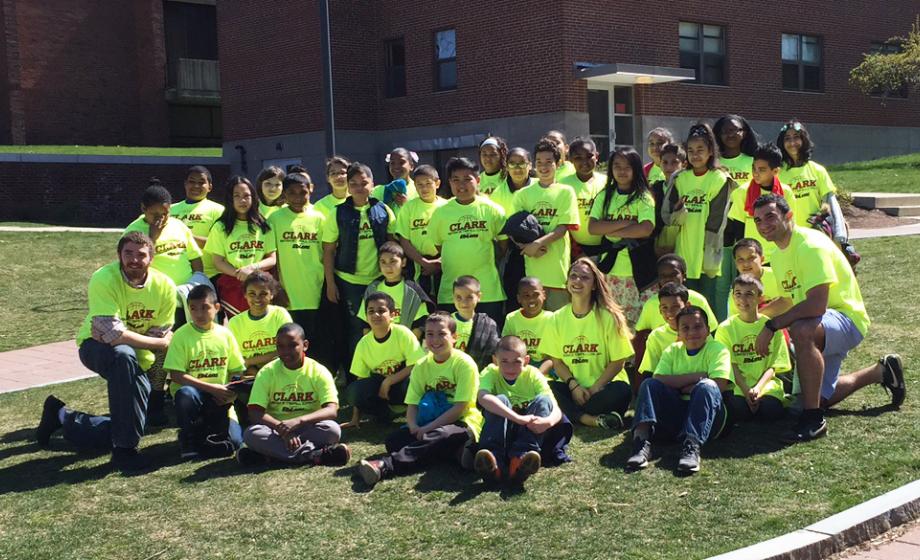 Standing inside the Academic Commons at the Goddard Library on a cool, bright April morning, Sarah Cramer ’16 asked a group of fifth-grade students from Worcester’s Columbus Park Preparatory Academy a very important question.

“Who, after seeing this tour, thinks college is really cool?”

Fourteen hands — one belonging to each student in the group — shot up, followed by a list of the things they liked ranging from the residence halls to the cafeteria and the library.

Cramer, an admissions ambassador, had just led the students on their very first college campus tour. The hope is that it will be the first of many.

This group of about 100 fourth and fifth graders were the second to visit Clark through the Columbus Park School Visit program, started by last year’s senior Gryphon & Pleiades Honor Society class. The students began their day learning from Mohamed Elmaola ’18, co-founder of the Worcester Soccer House, about making good choices. After stopping by the library, they listened to Coach Paul W. Phillips speak in the Kneller Center, took part in a game on the Campus Green with Upward Bound and ended with lunch from Dining Services.

Most importantly, the would-be first-generation college students got a glimpse of college becoming part of their collective future.

Making sure her students envision a college experience for themselves is especially important for Siobhan Dennis ’99, M.A.T. ’00, the principal of Columbus Park and a former Gryphon & Pleiades member.

“Columbus Park is three blocks from Clark, and many of the kids live in the neighborhood, but haven’t been on campus,” she said while watching the group inside Jonas Clark Hall. Dennis said visits like this one are important to having the students see that college is a possibility for them and that they are working toward higher education as a goal, not just passing time in school. 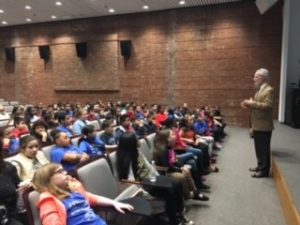 And the partnership with Clark is essential.

“In the past two years, the Gryphon & Pleiades Honor Society has identified Columbus Park Elementary School as a focus of its service to the community,” said Senior Associate Dean of the College Kevin M. McKenna (pictured speaking to Columbus Park students), who is also Dennis’ father and the honor society’s adviser.

Dennis said that on any given week 48 Clark students volunteer at Columbus Park, providing literacy support and helping out in classrooms, among other tasks.

“We feel a strong Clark connection,” she said.

It’s no surprise then that Clarkies would want to further help the school’s students outside the classroom.

Two paths merged on this route when Gryphon & Pleiades members wanted to create an event that would live on after they graduated in May, according to member Connor Guerin ’16. He said fellow member Timothy Conley ’16, who works at Marathon Sports, brainstormed the idea of a 5K race.

“As a group, we decided early on that community engagement would be a priority in some way or the other,” said Guerin, a psychology major and education minor. “We all agreed the main focus of the 5K would be to raise awareness and funds towards a single goal.”

At the same time, Melissa Tula, University Police office manager and Clery compliance coordinator, was exploring how to start an on-campus road race.

A runner herself, she said she “always wanted to do a Clark 5K,” and is getting her chance to help with that after hearing Guerin and Conley come into the station and ask about how to set up a detail for a road race.

After Tula, Guerin and Conley started working with CUFit, Clark’s wellness committee, the Clark Runs with Columbus Park 5K Run/Walk became a reality. The group’s goal is to raise money toward building a playground for Columbus Park students.

“Thinking of my past schools growing up, I realize what a luxury having one was and it does get to you a bit knowing that this necessity is not a reality for these students,” Guerin said.

But just like the students they’re helping, the race committee had some learning to do about how to organize a 5K.

Tula and Guerin said none of the committee members had much experience with the task, but that many — ranging from Police Chief Stephen Goulet to Physical Plant, Sodexo, Marathon Sports and Columbus Park staff, as well as individual members of Gryphon & Pleiades — have stepped up to help make it a true community effort.

The race, which kicks off at 9:30 a.m. at Atwood Plaza, will take runners past the Columbus Park school on Lovell Street, and finish back on campus. Children can participate in a 1-mile dash on the Campus Green at 9 a.m. before the beginning of the 5K. The race is open to Clark and Columbus Park faculty, staff, students, friends and family, and you’ll see many members of both schools volunteering at various points along the course.

While the race is huge undertaking, the organizers want it to become an annual event. They feel honored to help bring fun to the students, who someday will be able to run, jump and play on more than just pavement.

“Being able to support Columbus Park and what they hope to achieve is an amazing feeling,” Guerin said.

Do you want to run to help fund the Columbus Park playground? If so, here are the details: