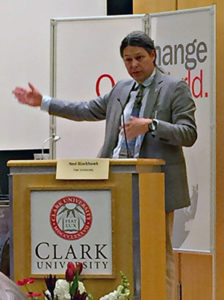 It was the extermination of entire tribes — the murder and displacement of millions, the theft of lands, the destruction of cultures.

And yet, according to Yale professor Ned Blackhawk (pictured), the eradication of Native Americans in the United States and Canada over several centuries somehow escapes consideration as a genocide in many history texts.

In the April 15 President’s Lecture he delivered to a packed Razzo Hall at Clark University, Blackhawk explored the phenomenon of “scholarly discomfort” with North American genocide.

His lecture was the keynote to open the Strassler Center for Holocaust and Genocide Studies’ weekend symposium, “Indigenous Identity and Mass Violence in North America: Genocide of Native Americans?”

Read more in the Worcester Telegram and Gazette …