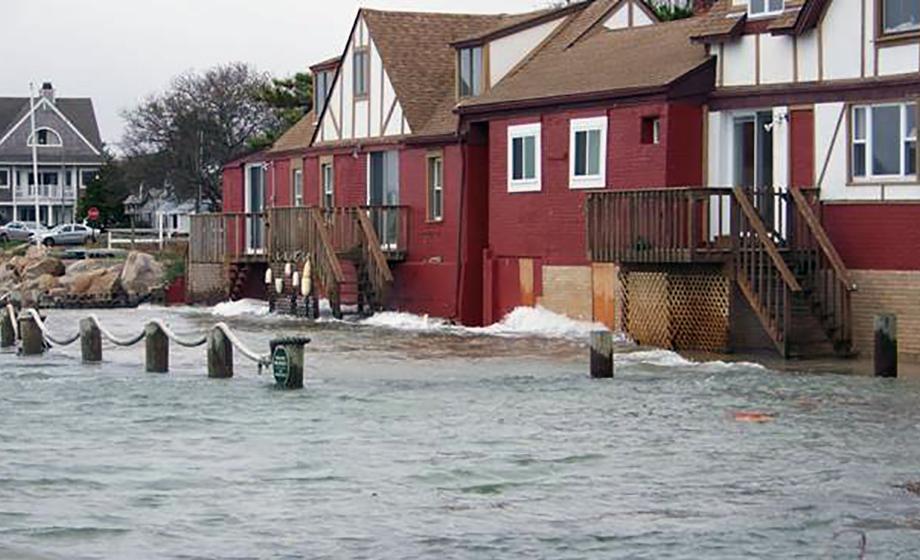 We see it on the news: video footage of waves crashing violently against seawalls, water flooding streets and making them impassable, beaches eroding and waterfront homes collapsing into the surf. As sea levels rise, officials and residents of coastal communities must make decisions about whether and how to address these problems. The solutions can be costly, and all involve trade-offs. 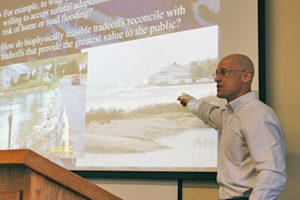 Robert Johnston, Clark University professor of economics and director of the George Perkins Marsh Institute (pictured), shared insights into research he’s conducted in communities that grapple with these issues in a recent talk, “The Economics of Sea Level Rise, Coastal Vulnerability and Adaptation: Choices and Tradeoffs in New England.”

Johnston has spent roughly 25 years conducting research in natural resource economics, including work with experts who use biophysical modeling to forecast the consequences of coastal storms and flooding, identifying which coastal areas are likely to flood and the resources that are likely to be affected. Through focus groups and questionnaires, he then works with the residents of coastal communities to determine how they value these impacts — be it effects on homes, beaches or coastal habitats — and what measures they would be willing to take to protect these natural and built resources. His research on coastal adaptation has been supported by agencies including the Northeast Sea Grant Consortium (through the MIT Sea Grant College Program and the Woods Hole Sea Grant Program), the National Science Foundation and the Delaware Department of Natural Resources and Environmental Control.

Johnston shares his research findings with officials from the local to federal level and says the greatest impacts of this information are often at the local and regional levels.

“Currently, local and regional decisions are often made with little economic information, and the information that is available can be misleading,” he noted. “For example, coastal adaptation decisions are often justified based primarily on ‘replacement cost,’ or the predicted monetary cost to repair structures damaged in a flood. But the cost to fix something is not the same as the benefit that thing provides. Because of this, decisions based on replacement costs alone can make society worse off than they are now.”

And Johnston said there’s a difference between social benefit and monetary cost.

“Economics isn’t all about money and markets and income. Economics is about tradeoffs, and the type of decisions that are best for society,” he said.

Among the questions often faced by seaside communities:

Local officials are often surprised by his findings.

Johnston noted a 2012 study he conducted in Delaware Bay, in which the “no action” policy alternative — wherein the state would take no action to protect the studied communities from ongoing beach erosion — was the option that generated the greatest net benefit to Delaware residents. This outcome was a surprise to many officials and stakeholders, and motivated decision-makers to consider new options for protecting vulnerable communities.

He also referenced an experiment he conducted post-Hurricane Sandy in the Connecticut towns of Waterford and Old Saybrook, two seaside communities that are geographically close but have very different vulnerabilities.  With funding from the Northeast Sea Grant Consortium, Johnston worked in partnership with Adam Whelchel, director of science at The Nature Conservancy in Connecticut, and his team to forecast possible effects of coastal storms and flooding on the two towns through 2025, and conducted more than a dozen focus groups with residents to discuss different adaptation methods. Based on the outcomes of these focus groups and forecasts, he developed and administered a “choice experiment” questionnaire to determine what kinds of adaptations residents would be willing to fund through additional taxes and fees, based on their votes over many different adaptation options with different forecast outcomes and costs.

In both communities, Johnston’s research found high values for the protection of natural assets such as beaches, and negative values associated with the construction of new hard defenses like seawalls. Surprisingly, most residents placed relatively low values on the protection of waterfront homes.

In Old Saybrook, for example, Johnston found that the residents were willing to pay to avoid widespread construction of new hard defenses. Although Old Saybrook residents valued home protection, they were not willing to accept “hardening of the shoreline” in order to achieve this protection.  Research also revealed differences between the two communities. While both communities valued the protection of coastal marshes, values for marsh protection were higher in Waterford where these natural habitats are scarcer.

These results came as a surprise to some officials in the two towns, as they contradict the commonly held belief that the protection of homes and roads from flooding is a top priority of coastal residents.

“Contrary to popular belief, most residents in these areas do not place high value on communities taking action to protect private property from flooding. Residents tend to view private property protection as the responsibility of individual homeowners,” Johnston explained.  “They would prefer to see scarce public resources used to protect natural assets such as beaches that benefit the entire community.”

While the owners of waterfront property gain the benefits of adaptation that protects these properties, the costs associated with these actions are typically spread among people who may or may not benefit directly.

“There are important equity issues at play,” Johnston said.

Because officials in these communities may hear from only a small number of vocal residents on these issues, they can get a skewed perspective on public values.

“This is why research of this type is so important,” Johnston noted. “It reveals the values of the entire public, whether or not they choose to show up at a public meeting or write letters to public officials. We often find a substantial difference between the values of the broader public and the values of the distinct few who are politically active.”

Johnston emphasized that findings such as these would remain unknown without the work of economists and other social scientists.

“We don’t always know what the answers are, and that’s why we do research. That’s why it’s so important to do what we do here at Clark.”