The sounds of Spree Day 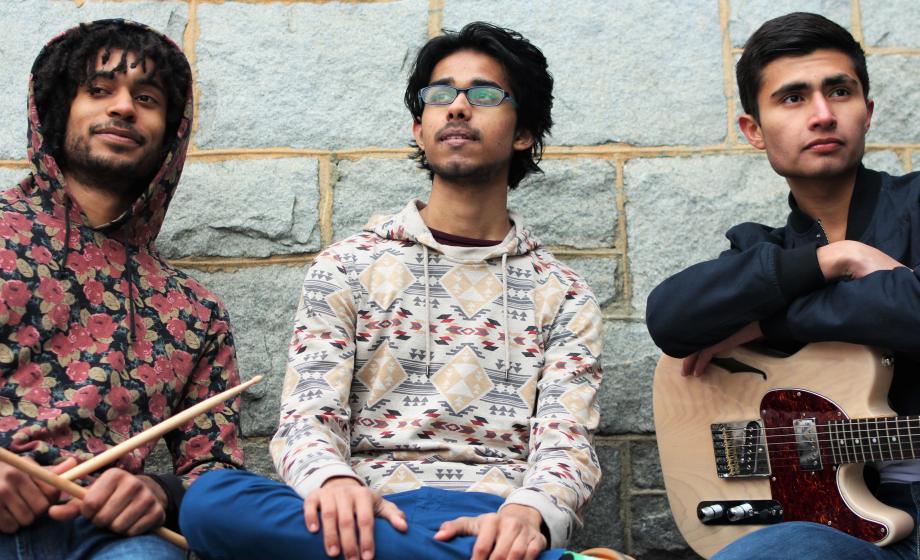 Clarkies are rocking out to some familiar voices at this year’s Spree Day.

Students Akiba Davis ‘16, Asir Arif ‘18 and Diego Baraona Calvo ‘17 (pictured above), of the band 3 Piece Meal, and Van Caraviello ‘16, better known as Van Ward, hit the stage on the Green to get students in the celebrating spirit.

They’re no strangers to the stage, Clark’s music scene or even each other. 3 Piece Meal has performed more than 30 times before, half of those at on-campus events, while Van Ward has done five shows, including a Spree Day 2015 performance. Also, they collaborated at a March 17 show at Beatnik’s in Worcester with singer-songwriter Olivia Frances ‘19.

Despite the impressive resumes, both 3 Piece Meal and Van Ward were looking forward to this Spree Day performance where they were set to play their own original songs as well as covers.

“We’re honored to be able to play Spree Day, and we thank the Pub Entertainment Committee (PEC) and Student Leadership and Programming (SLP) for giving us this opportunity, and working so hard to put together this great event,” Arif said in an email interview. “We’ve played for about 80 people twice before, but this Spree Day show will probably be the largest crowd we’ve played for yet.”

3 Piece Meal, whose name brings together their music and message as a trio, peace and community, came together after Davis, Baraona Calvo and Arif jammed together on stage at last fall’s International Journey Food Fair organized by the International Students Association.

“We hit it off instantly, and everybody seemed to enjoy it,” Arif said. “We don’t think most people know that that was our first time playing together. After that, we jammed a couple more times, and we knew very soon after that we wanted to get serious about embarking on a musical journey together.”

The band describes itself as an “experimental trio” on its Soundcloud page, and says it draws upon a diverse group of artists for inspiration — everything from Queen and Rage Against the Machine to Kendrick Lamar and The Dave Matthews Band — and that while some of the band’s songs could be classified as funk or pop rock “we just try to compose very groovy songs.”

Caraviello, who got involved in music when he came to Clark in 2012, takes inspiration for his style of music — hip-hop and R&B — from The Fugees, Chance the Rapper and U.K. artist Jamie Cullum, among others.

“I definitely draw inspiration from everyday life and my environment has a lot to do with that,” Caraviello said.

Both said they also draw inspiration from Clark professors.

“I work closely with him every week,” he said.

Arif, a double major in psychology and music, said the Jazz Theory class he and Davis took with Eric Hofbauer helped 3 Piece Meal construct their sound.

“We learned a lot about incorporating advanced modal solos and jazz progressions into more modern music,” Arif said. “Eric definitely inspired us to experiment more with these ideas. For example, our song ‘Take It Easy’ was mostly written by Davis, and it incorporates a lot of different slash chords.”

Both Arif and Caraviello say they manage to find time to practice amid their academic work.

“The longer you’re in school, the easier it becomes to manage your work,” Caraviello said. “I spend at least three hours a day either writing, producing or learning more about my craft.”

While two students — Davis, a music major, and Caraviello, a management major — will be graduating in May, there’s still more on tap for both 3 Piece Meal and Van Ward.

3 Piece Meal is recording its debut album, which it hopes to finish by the end of May, and wants to tour this summer from early July to late August.

“We’ve been in touch with musicians and venues from different states, such as Pittsburgh, New York, Maine and Connecticut,” Arif said, adding that they hope to have a schedule by early June.

Caraviello is releasing a new EP named “All I Know is Love” in the next few weeks and mentioned his cover of songwriter and rap artist Bryson Tiller’s “Don’t” has nearly half a million plays on Soundcloud.

“It has been well received,” he said.

Clarkies share their passion for the theater at prestigious virtual festival