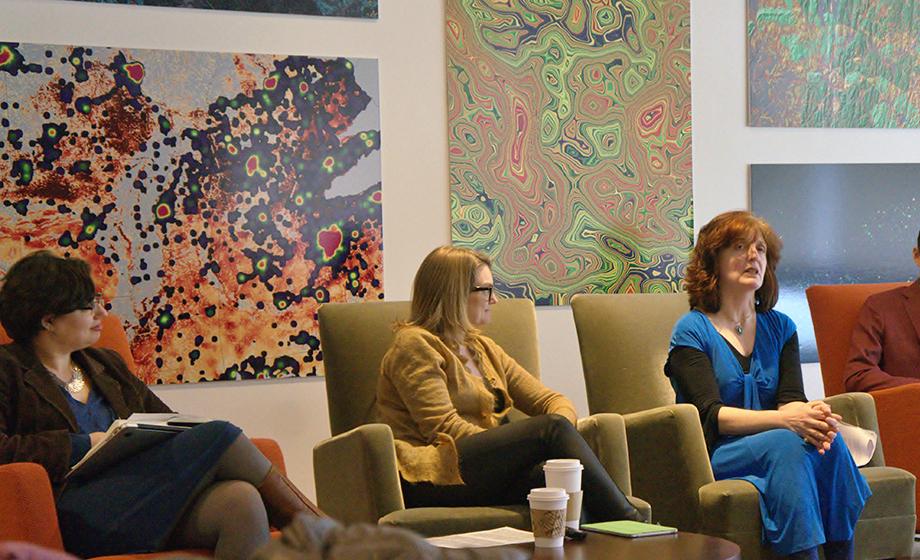 The Geller Jazz Concert Series on April 6 included the virtuosity of trumpeter Tom Harrell, who performed in Razzo Hall, and a more discreet, though no less impactful, conversation in Dana Commons.

Matt Malsky, dean of the college and professor of music, organized and hosted a panel of scholars who addressed the various ways in which disability, as a social construction, interacts with music.

The panelists offered both personal and academic insight into how discussions on music and disability involve questions of accommodation, acceptance and, above all, triumph of the human spirit.

Jensen-Moulton proposed “a private and public partnership” to draw upon the “broad experience of Others — with a capital ‘O’ — for additional insight into the complex and largely ‘ability landscape’ of the musical world.”

Cheng shared a personal account of battling chronic pain — the cause of which remains frustratingly undiagnosed — while trying to engage with music. “During actual moments of excruciation, reclaiming beauty struck me as an impossibility; I felt emaciated, dejected, antisocial,” he recalled. “Although I enrolled myself into taking in beauty everywhere, I usually ended up coveting this resplendence as if it were the pageantry of an alternate universe.”

A pianist, Cheng said the pain eventually forced him to abandon music as his “body and worldview became undone.” He addressed the importance of accepting offers of compassion: “To depend on others is to confess that we are not enough, but another way to see this is that we are not alone.”

Jones spoke of “deaf-hearing” or “hearing-deafly,” explaining that although deafness “involves an absence of sound perception,” there are also “distinct advantages to the social and cultural life that one’s deafness brings.” In addressing this “deaf-gain,” she pointed to Beethoven’s Nightmare, a deaf-rock band that exemplifies how the human body experiences sound vibrations in different ways. Thus, she said, music and deafness can coincide.

Lastly, Newman described her experience as a music teacher to Eddie Bonafe, a musical savant, who, in spite of his mental disability, demonstrated profound musical skills beginning at age 3. Eddie became renowned, earning profiles in The New York Times and on the NBC Nightly News, a segment that was played for the audience at Clark.

Newman, who spent five years with Eddie, spoke of how he transformed into “an engaged, expressive person.”

“Sound spurred him to use music in ways nothing else did,” Newman said. “It was the powerful operation of desire in music.” Having taught Eddie at a time where musicology scarcely discussed the importance of studying music and disability, she said, “it is gratifying for me today to see this area of inquiry being addressed at long last.”