Election-year politics are no party 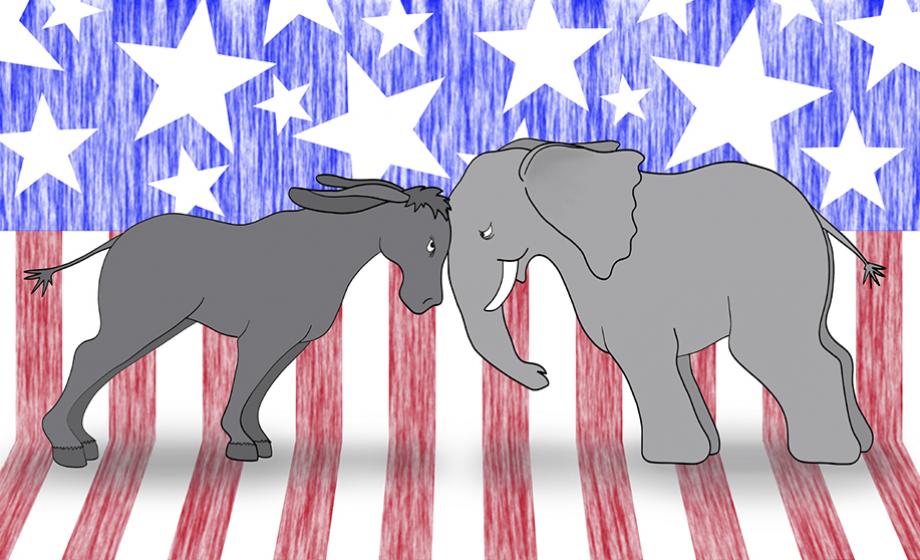 These and other equally unpleasant words have shaped the vocabulary for the 2016 presidential campaign, three political scholars told a Clark University audience last week. And it will only get worse.

The speakers were welcomed to Tilton Hall for the Harrington Lecture, sponsored by the Political Science Department and the Mosakowski Institute for Public Enterprise.

David A. Hopkins, assistant professor of political science at Boston College, described an “asymmetry” between the Republican and Democratic parties, not just in the policies they espouse but in the way they view themselves. Republicans are more driven by ideology and seek fidelity to “broad conservative and constitutional precepts,” he said. They view themselves as resolute and moral; they stress themes of Americanization, patriotism and cultural traditionalism and they attack government in general terms.

Democrats, he said, are more focused on group interests, such as those of the middle class, African-Americans, gays and women. They value compromise, view themselves as “cooperative, practical, compassionate and electable,” and eschew abstract ideological labels.

Hopkins described most Americans as “symbolically conservative but operationally liberal.” While they may express a conservative mindset on issues like national health care or education funding, when it comes to a decision on whether to cut programs “conservatism starts to melt away.”

Ironically, in this election year the left has in Bernie Sanders a candidate who is running on an ideological platform, and the right has in Donald Trump a leading candidate whose conservative bona fides are questioned by his own party, Hopkins said. He attributes the latter’s rise to Republican voters’ rebellion against the party establishment.

A candidate’s advertising strategy can be effective when deployed properly, but it’s no silver bullet for success. “It can’t make someone unelectable into someone who is electable,” said Erika Franklin Fowler, assistant professor of government at Wesleyan University. “If people don’t like what you’re selling it doesn’t matter. We saw that with Jeb Bush.”

A director of the Wesleyan Media Project, which tracks and analyzes campaign advertising, Fowler noted that advertising by special-interest groups skyrockets during the presidential primaries, even more dramatically since the Supreme Court’s Citizens United decision removed campaign spending limits. Most Americans haven’t heard of some of the largest advertisers like Crossroads and Restore Our Future, which typically bear generic patriotic-sounding names, she said.

The Wesleyan Media Project studies ads for such things as tone (positive or negative), issues and themes, “mentions” (for instance, how many times Barack Obama is mentioned) and emotional appeals, which typically are accompanied by stirring music and a reassuring voiceover.

Research has shown that ads sponsored by a group in support of a candidate, rather than ads paid for by the candidate, have more influence and shield the candidate from backlash, Fowler said. Groups often “hijack” a particular issue, she added, but disclosure laws are helping to level the playing field.

Despite its ugly connotation, “outrage” has become an increasingly legitimized form of discourse, according to Sarah Sobieraj, associate professor of sociology at Tufts University. The “outrage industry” provokes fear, indignation and anger by promoting misleading or inaccurate information, ridiculing opponents, bullying, issuing ad hominem attacks and preaching impending doom. It flourishes most prominently among the right-wing media, particularly talk radio, said Sobieraj. As an example, she cited the false claim that Obamacare would include so-called “death panels” deciding patients’ fates, which was recirculated in the conservative media during the health care debate.

While the U.S. is politically polarized, Sobieraj pointed to other developments that also account for the harshness in the national discourse. One of the most notable is the changing media landscape, marked by the rise in niche programming relying on “snark and vitriol” to cater to small homogeneous audiences.

Sobieraj also pointed to a sense of powerlessness among many white men, who’d been led to believe it was their birthright to succeed so long as they worked hard. “They feel they’ve been robbed and they want someone to be held accountable,” and the scapegoats are often women or people of color, she said.

Trump, she said, is evoking a visceral response from his supporters, who insist he “tells it like it is,” even when he’s not telling the truth. “They embrace him not despite his rhetoric, but because of it.”