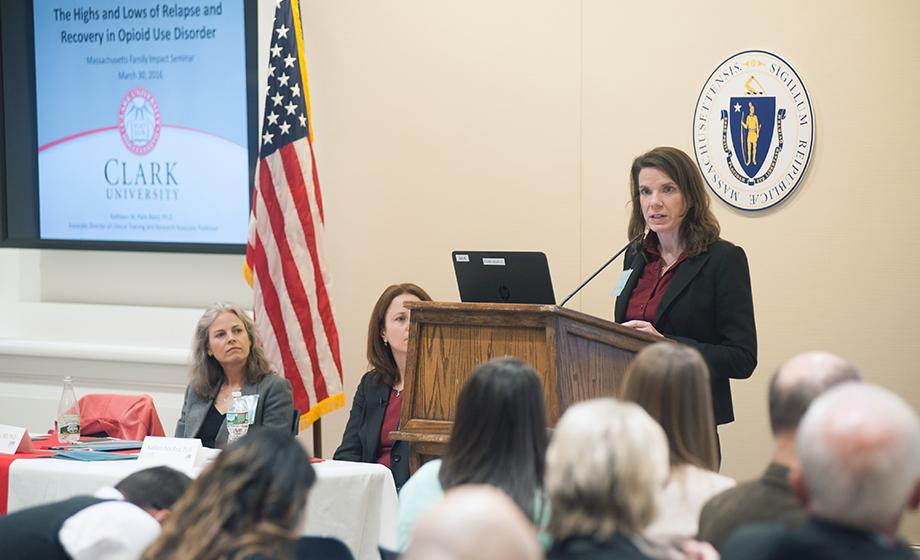 Room 428 in the Massachusetts State House filled up quickly the morning of March 30 as legislators, educators, students and observers came to hear leading clinicians and researchers unpeel hard truths about the debilitating impact of drug use on a growing number of people, often the young.

The Mosakowski Institute for Public Enterprise at Clark University attracted its largest-ever audience for the seventh annual Family Impact Seminar (FIS), “Marijuana, Opioids and Our Families.” The seminar promotes non-partisan research on pressing family issues to encourage legislators to enact the most effective policies, according to FIS director Denise Hines (shown above), research associate professor of psychology at Clark, who planned and facilitated the presentations.

Staci A. Gruber, director of the Cognitive and Clinical Neuroimaging Core and associate professor of psychiatry at McLean Hospital/Harvard Medical School, began with a presentation about the early onset (under age 16) use of marijuana.

Early use, she said, has significant impacts on a brain “still under construction” by disrupting neuron development and altering the brain’s physical structure. Among high school seniors in 2015, daily marijuana use was higher than cigarette use (6 percent vs. 5.5 percent), she noted, and the marijuana they used typically included more potent amounts of THC than in the past. THC, or tetrahydrocannabinol, is the chemical in marijuana that produces psychological and physical effects. 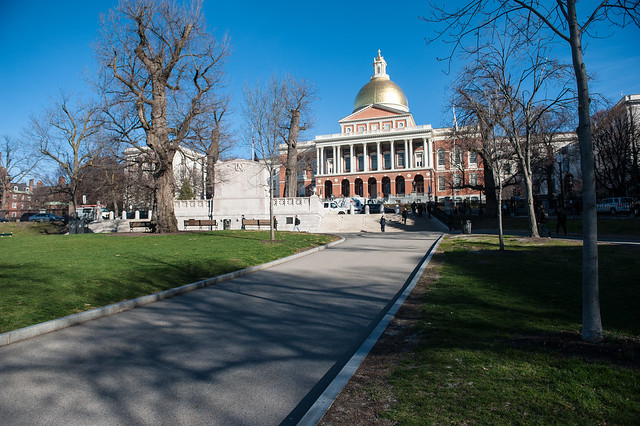 ​Frequent marijuana use (weekly or more often before age 18) has been linked with reduced IQ, attention, memory, processing speed and so-called “executive function,” which entails such things as planning, prioritizing and impulse control. These impairments may persist into later years. The slogan “Just say no” didn’t work, Gruber said. A more easily adopted message is: “Just not yet.”

Gruber urged an honest dialogue about the potential pitfalls of marijuana use. More research is needed on rates and modes of use, and perception of risk and harm, as states consider laws regarding recreational and medicinal marijuana, she said.

John F. Kelly, associate professor of psychiatry at Harvard Medical School and director of the Recovery Research Institute at Massachusetts General Hospital, offered an unvarnished assessment of the nation’s drug issue: “We cannot eliminate our drug problems, but we can minimize them by taking different policy positions,” he said. “We have to choose which drug problems we’re going to have.”

Kelly said policy has been outpacing science, noting that laws allowing medicinal marijuana have been passed with little research assessing the positive and negative impacts. Now, with Colorado and Washington legalizing the cultivation and sale of marijuana, the conversation has turned to proposals in other states either to decriminalize or legalize it.

He pointed to a number of arguments in the pro-legalization camp, including the failure of the government’s war on drugs, the racial disparities in incarcerations for drug offenses, improvements in quality control and the prospect of tax revenue for states.

Full-on legalization and commercialization offer potential complications, he said. With increased availability, cheaper prices and the removal of social stigma, the rate of marijuana use surely would rise, as would addiction rates; productivity could decline. Aggressive advertising of the product and marketing toward a younger audience (for instance with marijuana-infused edibles) would increase the incidence of impairment, he said.

Kelly cited a study that followed marijuana users from age 13 to 38 showing that those who smoked marijuana heavily in adolescence had an IQ eight points lower than nonsmokers. Even those who eventually stopped smoking continued to exhibit less memory capacity and attentiveness.

Decriminalization, which makes possession a civil infraction rather than a criminal offense, may be the “sweet spot” between legalization and prohibition, a policy that failed to curb alcohol use in the 1920s, Kelly said.

Relapse and recovery in opioid use disorder

More than 2.6 million Americans are living with opioid use disorder fueled by an increase in the use and abuse of prescription drugs and heroin, said Kathleen M. Palm Reed, associate director of clinical training/research professor of psychology at Clark University. The reasons for addiction are varied, and the number of fatal overdoses — heroin-related deaths have quadrupled since 2000 — continue to climb. The Northeast, she said, has exhibited the largest rise in people transitioning from the use of prescription opiates to heroin.

Relapse is common and can happen at any time, Palm Reed said. Stressful life events, emotional upheaval, exposure to certain environments, craving and physical discomfort are all factors that can trigger a backslide. She said it’s a common misperception that addicts are “fixed” after treatment and shouldn’t be expected to relapse, noting that if someone suffering from a different ailment, like hypertension, relapsed, “we wouldn’t be surprised.”

Those struggling with substance abuse are often stigmatized — even by caregivers — which not only can dissuade them from seeking help but can actually fuel a relapse. Obtaining methadone can present challenges, robbing a person of privacy and dignity and illustrating a lack of coordinated care, Palm Reed said.

Hilary Smith Connery, clinical director of the Alcohol and Drug Abuse Treatment Program at McLean Hospital and assistant professor of psychiatry at Harvard Medical School, took on several myths associated with treating addiction with medication. She cited three FDA-approved medications — methadone, buprenorphine and naltrexone — that target the brain’s opioid receptors, doubling the chance of good outcomes when added to other treatments. Medications alone don’t work for those with opioid use disorders, Connery said, and therapy alone is successful in only about 5 percent of people.

Opioid-related deaths are not accidents, she noted. Users are typically aware of the risks and some in fact “think it wouldn’t be so bad to go out that way.” She noted that addicts are often full of life and resilient, but may experience brief onsets of deep despair that lead to suicidal thoughts that can be acted on in the moment through the use of lethal substances.