Miles smiles, but only if you can find him

A portrait of the jazz great is hiding on campus. Do you know where to look?
By Jessica Zandan, M.A. '05

If you’ve spent any length of time on Clark’s Worcester campus since 1994, you’ve probably walked by famed jazz musician Miles Davis a hundred times and not realized it.

A colorful painting of the famous trumpeter hangs tucked away in a corner of the first floor of the Higgins University Center, on the wall above the elevator door and behind a concrete column. It’s large, but, somehow, easily missed. I, a Clark alumna, hadn’t noticed it before a colleague mentioned it earlier this week while talking about the upcoming Davis biopic “Miles Ahead,” starring Don Cheadle, set for wide release this weekend. 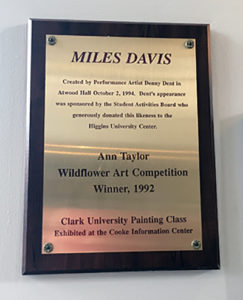 I found it hanging just where she said it would be, snapped a photo and then noticed a brass plaque that told a brief story about the artwork.

This sparked a number of questions with the most important being, who was Denny Dent?

A Google search revealed he was a pretty eccentric guy.

Referring to himself as “Denny Dent and his Two-Fisted Art Attack” on his website, Dent used two hands, three brushes and set his painting — usually done on large canvasses similar to the Davis painting — to music. He would finish within a set amount of time, usually within seven minutes, according to his New York Times obituary.

He told the Rocky Mountain News he first gained notoriety after calling a Las Vegas radio station, offering to paint a portrait of John Lennon at a 1981 vigil marking the first anniversary of his death, and telling them he could paint with both hands. He told the Christian Science Monitor in 2000 the idea of having his own performance artist show was born from that event.

Dent died in 2004, but not before painting in front of hundreds of thousands of people at the 25th anniversary of Woodstock in 1994 as well as painting numerous celebrities and politicians, including Elton John, Mick Jagger, former President Gerald Ford and former Secretary of State Colin Powell. A second Davis painting, a vertical, is displayed on Dent’s website. It’s possible that his August Woodstock appearance provided the springboard for his invitation to Clark in the fall.

Other information on that plaque — like the Ann Taylor Wildflower Art Competition mentioned near the bottom — was clarified by Clark Studio Art Professor Elli Crocker. She said her painting class submitted a group project, the winning entry, to the competition sponsored by the Ann Taylor store in Cambridge, Mass.

Crocker said the painting, which was large with flower images, hung in the store for “quite a while.” She said it returned to Clark and “hung for many years in the lobby of the UC behind the desk.”

She wasn’t sure where that painting is now, though. Another artistic mystery to solve.

But, for now, on the way to lunch or dinner or if you’re heading a meeting or workshop in the UC, spend a minute with Dent’s work — and wonder just how many, or few, minutes it took him to create it.