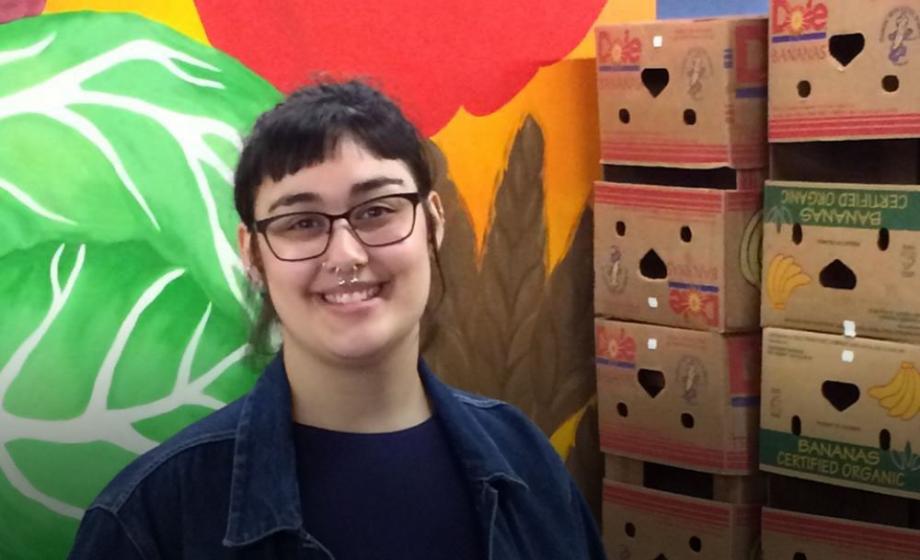 For Clark University junior Katlyn A. Greger, artistic interests transcended into effective practice when she was given the opportunity to create a mural for the Worcester County Food Bank.

The biology and studio art double-major was initially recognized for her creative abilities while interning with North Grafton-based Community Harvest Project over the past summer. As a sustainable farming intern, Greger formulated a special project where she painted signs for the Project’s Brigham Hill Community farm. Taking note of her skill, project manager Wayne McAuliffe then recommended Greger to Naomi R. LeBlanc, director of development at the food bank. As Greger states, “One thing led to another and I got the job.”

Greger was then asked to design, create and paint a mural of healthy foods, fruits and vegetables. This occasion came as a combined expression of her interest in both art and farming. “I’ve always considered myself an artist,” she says. “As a little girl, that was the first thing I’ve wanted to be.” She also plans on being involved in farming, acknowledging a “personal bond with food and the growing of healthy nutritious food.”

When it comes to her academic endeavors, Greger’s engagement with biology stems from her fascination with “organismal diversity.” She also commends Clark’s studio art classes for giving her the “time to hone in and work on [her] skills and visions.”

In addition to the mural, Greger says the internship gave her an introspective look into other issues. “It has helped to open my eyes to food insecurity in this country and has given me vital experience for what eventually want to do in this world.”

“We are thrilled with Katie Greger’s mural,” Sally L. Hodgerney, development and communications associate at the Worcester County Food Bank, says. “It exceeded our goals of representing the Worcester County Food Bank’s emphasis on providing nutritious food to those in need, while transforming our warehouse into an inviting and joyful space for our loyal and dedicated volunteers, Partner Agency representatives, visitors and employees.”