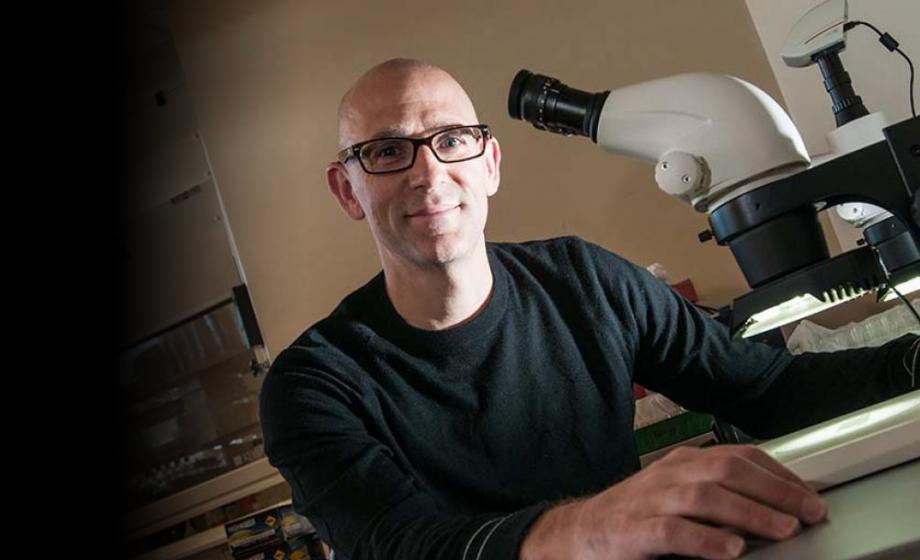 To hear John Gibbons talk about bioinformatics, you’d think this trend in the sciences is relatively straightforward.

“Historically, if you used a computer to analyze biological data, it was considered bioinformatics,” he says.

But Gibbons, an assistant professor of biology at Clark University, admits that description undersells the benefits. With science and technology meshing at an incredible pace, scientists are generating information rapidly and in huge amounts — information that can be difficult to understand unless it can be gathered and analyzed properly.

Clark is taking a comprehensive approach to bioinformatics, hiring faculty and utilizing high-powered computers to both generate and interpret massive amounts of data. The team of Gibbons, Rob Drewell, associate professor of biology (pictured above), and Jackie Dresch, assistant professor of mathematics, is shaping curriculum and research to help Clark make its mark in this emerging field. Gibbons and Drewell joined the faculty last year; Dresch came to Clark this year from Amherst College.

Dresch says the gulf between scientists and mathematicians might appear large, but the relationship between the two is actually synergistic: they are learning to speak each other’s language and see the benefits of collaboration.

“We’re not saying they have to become experts [in each other’s disciplines],” she says, “but it’s enough just to get them comfortable with crossing the boundaries between fields.”

Even Dresch wasn’t familiar with how bioinformatics would work early in her career.

“I very much started out as a mathematician,” she recalls. “I didn’t have an interest in biology, but it quickly become clear to me that I had a lot of skills that were useful to biologists.”

A few classes in quantitative biology sparked her curiosity and revealed how her mathematician’s passion for small details equaled that of many biologists, even if their methods were different. “Understanding the intricate dynamics of complex systems, such as the ever-evolving world around us, is at the heart of applied mathematics,” she says.

According to Drewell, a revolution is stirring at the interface of biology, mathematics and computer science. “Many biologists eventually will use computational or mathematical experimental approaches. That’s how we train our students.” The amount of data that scientists have available is increasing exponentially, he says, but scientists need efficient ways to analyze it so they can use it quickly, not five years down the road.

Bioinformatics is the answer. “As a grad student in the late ’90s, we were all bummed out that the big questions had been answered in biology,” says Drewell. “We had no idea this massive revolution would occur.”

Provost Davis Baird says he made a conscious decision to hire faculty across the science disciplines who could make use of the supercomputer cluster. “Not only is it a tremendously valuable resource and wonderful selling point for faculty, but also for students who will have opportunities to engage with our faculty in cutting-edge research using this technology,” he says.

All three professors say the cluster was a top consideration when they looked at Clark. “I wanted to make sure we would have the resources to allow us to do the research we wanted to do,” says Drewell, who came to Clark from Harvey Mudd College.

Clark was on Gibbons’ radar because he knew of its reputation as a smaller institution that conducts intensive research. He also knew Clark’s supercomputer cluster would help him analyze data with enviable efficiency as he conducts research in genomics and evolutionary biology. “It’s something I need to do my research,” says Gibbons, “so I was only looking at places that had computer clusters.”

And as genome sequencing and bioinformatics progress at a rapid-fire rate, Gibbons is excited by the opportunities for scientists in the field. “I am fortunate I went to grad school during this boom,” he says. “People are interested in technology and what we can learn from it.”

From a mathematical perspective, Dresch is not only searching for an interesting biological question to work on, but for one that can be better understood through a new mathematical approach or application. Building a novel mathematical model or computational algorithm based on biological assumptions, and rigorously analyzing that model, is what she sets out to do as a mathematician.

Biologists, however, may see the value of such a model in its ability to predict the outcome of future biological experiments, and even help in experimental design. Dresch points out that, “in the end, both disciplines benefit from the interdisciplinary nature of such a project.”

Even the imperfect result is valuable, Drewell notes. “We know the model isn’t perfect,” he says, “but the next round of experiments will be informed by that model.” When all the complexities of any particular biological system are revealed, the numbers alone can help guide the next experiment closer to success.

Dresch teaches a first-year intensive that introduces students interested in math and biology to the advantages of blending the two. Drewell and Dresch (who are husband and wife) are co-teaching a mathematical modeling of biology course incorporating both a classroom setting and a computational lab.

“Nothing like this has been offered at Clark before,” says Drewell.

As part of this initiative, a group of faculty members from the biology and mathematics/computer science departments have launched a new concentration: Mathematical Biology and Bioinformatics. The main objective of this concentration is to train students directly at the interface of mathematics, computer science and biology. Dresch envisions this program as an opportunity to “open the minds of students to the exciting possibilities at the intersection of these disciplines.”

“Lots of biologists wouldn’t say they are afraid of math, but when it becomes very quantitative, it’s intimidating,” she says. “It’s the willingness to trust in the collaboration. Our role at Clark is to continue the research and to be part of training the next generation.”