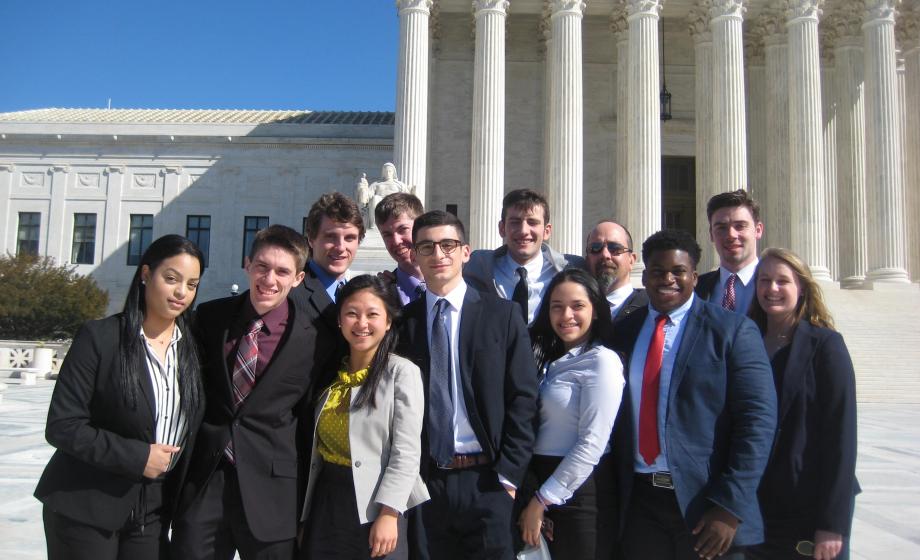 On Sunday the students explored Washington then had dinner with Clark alumni Bonnie Trunley ’13, M.P.A. ’14, and Jake Siler ’06. Bonnie is a second-year law student at Georgetown University, and Jake is a Georgetown Law graduate who has recently taken a position as an attorney at the Federal Election Commission. The group was joined for dinner by Anayeli Nieves-Alvez ’17, who is interning on Capitol Hill this semester for Congresswoman Katherine Clark (D-MA) as part of the Congressional Hispanic Caucus Institute program.

The group attended oral arguments at the Supreme Court on Monday. During the first case, the students heard Justice Clarence Thomas ask his first questions at oral arguments in more than ten years. Later that day, the students met with Supreme Court Judicial Fellows who are spending a year working at the Administrative Office of the Federal Courts, at the Federal Judicial Center, at the U.S. Sentencing Commission, and for the Counselor to the Chief Justice at the Supreme Court. Later in the day, Zak Doenmez ’14 took the group to see the U.S. Senate chamber. Doenmez has recently taken a position as a staff assistant for Senator Elizabeth Warren (D-MA).