On Leap Day in 2012, Clark University celebrated the official launch of its pioneering model for higher education known as LEEP (Liberal Education and Effective Practice). Today, the first students to experience LEEP throughout their four years as “Clarkies” are preparing to graduate, making this February 29th seem an opportune time to share the progress, challenges and successes of Clark’s ambitious and innovative LEEP program.

Clark’s LEEP goals of fusing a liberal education with intense world, workplace and personal experiences has demanded deep, deliberate and creative change across the campus community. The decision to embark on this bold initiative was based on years of research in the learning sciences and emerging adulthood, guided by the essential learning outcomes of the Association of American Colleges and Universities (AAC&U).

“LEEP reaffirms the hallmarks of a Clark education …  We are deepening and aligning the connections among all aspects of a Clark education through innovative curriculum initiatives, through creative new approaches to student advising and mentorship, and through impactful partnerships involving leading employers, faculty, students, staff, and alumni.”

Clark continues to develop the LEEP model and innovative curricular and co-curricular programs designed to prepare students to lead meaningful lives. Here are some highlights: 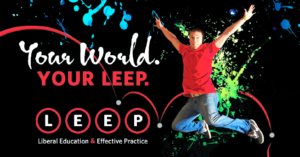 Richard M. Freeland, ex-Commissioner of Higher Education for Massachusetts (2008 to 2015), former president of Northeastern University, and vice chair of the Clark Board of Trustees, said this about the University’s unique LEEP program:

“Clark is truly creating a new academic model that systematically links liberal learning to the world of practice at every single stage and in every dimension of the student experience. The University is doing this because its leaders believe that the enriched form of undergraduate learning that LEEP provides is what our country needs, and what our young people need, as we face the challenges of the 21st century.

“LEEP places Clark in the forefront of a movement that is changing higher education and especially enriching the great tradition of liberal learning that has represented the pinnacle of college-level education in the United States since the founding of Harvard in 1636.”

Although this “LEEP Day” at Clark won’t involve a lively celebration in Tilton Hall (complete with balloons and capturing a photo gallery of leaping Clarkies), the busy LEEP Center will mark the anniversary with cookies and refreshments, and the University will continue to apply, examine and expand LEEP’s lasting influence on student learning and success at Clark University and beyond.