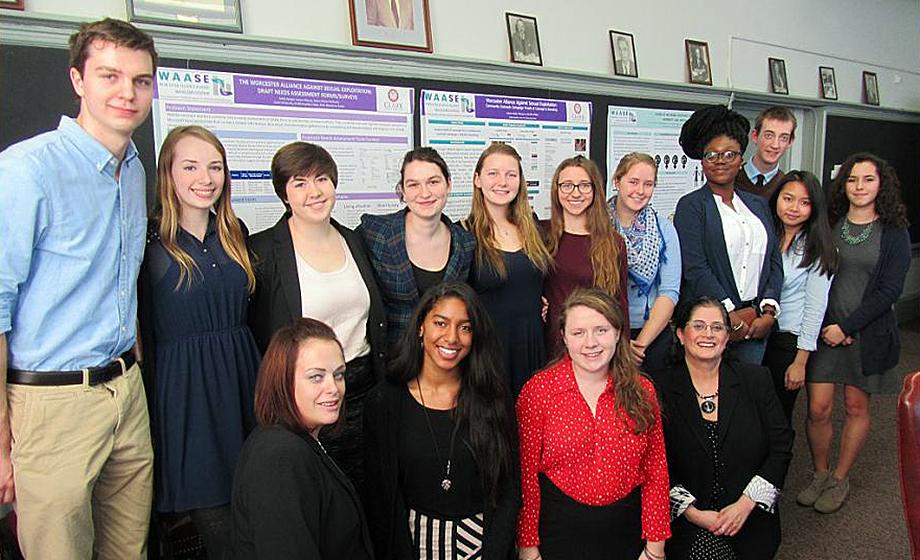 The Boston Globe reported this stark statistic last fall: Halfway through 2015, more than 4.5 times as many people in Massachusetts had died from opioid-related overdoses than from car crashes. By the end of the year, opioid-related deaths numbered over 1,200, nearly a 400 percent increase since 2000.

Now, with the help of Marianne Sarkis and her First-Year Intensive (FYI) course, “Healthy Cities,” 15 Clark University students have learned much more about the opioid crisis — and have proposed steps to help Worcester combat the problem.

Required for all first-year Clark students, FYI courses give students the opportunity to take what they learn in class and apply it to real issues. And that’s just what Sarkis’ students did. Each of six student-run teams proposed solutions to address one of two urban health issues: opioid abuse and sexual exploitation. Community stakeholders — the city’s Division of Public Health and the Worcester Alliance Against Sexual Exploitation (WAASE) — commissioned the projects.

“I designed the class with a focus on quantitative reasoning and analytical skills, and I wanted the students to see that every piece of data tells a story,” said Sarkis, assistant professor of international development and social change. “A survivor of sexual exploitation and a public health outreach worker sat in on the class and advised students on their projects. The students heard the stories behind the data and theories. They saw how what they were doing in class could directly and almost immediately impact the community. It was a very powerful experience.”

After applying their “social justice lens,” the students “wove together a powerful narrative about urban health and health disparities,” she said. They presented their findings and recommendations to the Worcester Division of Public Health on Dec. 7.

To address Worcester’s opioid issues, Eric Keller ’19 and Elisabeth Wichser ’19 “mapped” the city’s heroin abuse so that health experts, city councilors and the public could understand the impact on various neighborhoods and demographic groups.

“I wanted the project to turn out well because it wasn’t just for a grade; it could actually influence policy decisions undertaken by the city of Worcester,” Keller said.

Research by one of his classmates, Keegan Daugherty ’19, already may be influencing city policy, in part because of her internship with Matilde Castiel, M.D., Worcester’s commissioner of health and human services.

Only two months into her first semester at Clark, Daugherty appeared before the newly empowered Board of Health at its first meeting on Oct. 22. She presented research and advocated for a needle-exchange program in Worcester.

Currently, yellow boxes are installed in parts of the city so that drug users can safely deposit used needles and syringes, but there is nowhere for them to obtain clean needles. Research shows that needle-exchange programs can decrease risky behaviors and transmission of HIV and hepatitis C, as well as connect drug users to counseling and treatment, Daugherty told health officials. Needle-exchange programs cost much less money than medical treatment for HIV and hepatitis C while further protecting general population health.

“It was incredible to see a college freshman make this presentation as she did,” Castiel said. “She has a passion for public health, and it shows.”

Using some of Daugherty’s data, city health officials presented before City Council in November. Councilors subsequently gave the board and the Division of Public Health the go-ahead to consider a needle-exchange program as part of Worcester’s anti-opioid efforts.

Daugherty also conducted research on opioid abuse for Sarkis’ class, working with Kayleigh McHugh ’19. At the Dec. 7 presentation, they suggested a “holistic community-based approach” among schools, police, public health officials and hospitals that would include monthly progress meetings, data sharing and open forums for addicts and families. They even came up with a name: Worcester Opioid Addiction Coalition.

“I really enjoyed having the opportunity to work on a project that I believe will have an impact on the community,” Daugherty said. “I feel like the class came up with plans that will directly help with some of the more sizable issues that the city currently faces.”

Besides the student research on opioid abuse — which is proving useful in current citywide discussions — two additional “Healthy Cities” projects are progressing: a community outreach campaign and website redesign for the Worcester Alliance Against Sexual Exploitation and a proposed safe house for female survivors of sexual exploitation that is undergoing a feasibility study.

Karyn E. Clark, director of the Worcester Division of Public Health, asked all six of Sarkis’ student teams to share their findings at an upcoming Board of Health meeting. “This is all very timely, and it is very helpful to the work we are doing,” Clark said.

“These presentations and the work and analysis that went into them were even more impressive given that the students arrived at Clark just three months ago,” he said.

For Nancy Budwig, Ph.D., associate provost and dean of research, the “Healthy Cities” FYI course is a great example of the kind of education that Clark students receive.

“This is far from the norm in higher education,” she said. “At Clark, student learning and faculty research come together in powerful ways and — as this seminar demonstrates — ways that impact the broader communities of which we are a part.”