Dr. Richard Pietras ’69 pioneered a groundbreaking treatment for breast cancer. Now he is taking on the growing epidemic of lung cancer in women.
By Jim Keogh

A diagnosis of lung cancer is stained by a reputation most other illnesses don’t bear, one shaped by its historical link to smoking. The easy perception is that lung cancer patients at some point lit up and drew the carcinogens into their bodies, making them active participants in their own self-destruction. Put simply: They asked for it. 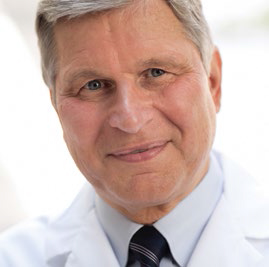 One other notion clinging to the past is that lung cancer is a “man’s disease.”

After all, men had a long head start with smoking before women were even allowed to touch a cigarette to their lips, and many men also traditionally worked rough jobs that exposed their lungs to toxic materials. It would stand to reason that the incidence of lung cancer in women would not be as significant, nor the toll as pernicious.

As professor of medicine-hematology/oncology and director of the Stiles Program in Integrative Oncology at UCLA’s Jonsson Comprehensive Cancer Center, Pietras has treated thousands of patients suffering from all types of cancers. He has seen the ravages, counseled grieving families, and searched for new ways to repel the enemy. It is within this landscape that he bears witness to what he describes as an “epidemic” of lung cancer in women.

“Lung cancer is the leading cause of cancer death among women. It kills more women than breast, cervical and ovarian cancers combined,” Pietras says, citing an astounding statistic: Female lung-cancer deaths have soared 600 percent since 1950. Just as astonishing, most nonsmokers who contract the deadly disease are women. Over the last 11 years, Pietras has dedicated himself to learning why that is and how to bring down those terrible numbers.

To better understand his motivation requires a step back to his Clark University days.

A native of Chicopee, Mass., Pietras was only the second member of his extended family to attend college. The first, an older cousin, Robert Pisarski ’68, was a student at Clark, and Richard’s father suggested his son consider joining him there. The University’s offer of a four-year Travelli Scholarship supplied added incentive.

“There were very few people in my high school or family who could advise me on what was the best thing to do,” he recalls. “Fortunately, for me, going to Clark was a wonderful experience that prepared me well for my future.”

While studying under professors David Moulton and John Reynolds, Pietras became intrigued by how hormones affect human function, and by his senior year he’d received a National Science Foundation grant to do neurobiological research. After graduating, he worked at the University of Pennsylvania for two years, then headed west to earn his Ph.D. in endocrine physiology at UCLA. In 1986 he graduated from UCLA’s medical school. “I’ve been part of the UCLA community ever since,” he says.

In the 1980s and 1990s, Pietras worked on a breast cancer research team led by Dr. Dennis Slamon, which traced the growth of certain kinds of tumors to an “overexpression” of a gene called HER-2/neu. The protein product of the gene existed at the surface of about 15 to 20 percent of breast tumors and indicated a “receptor protein” that can activate the proliferation of tumor cells. The doctors discovered that certain types of antibodies could be used to block the action of the receptor, in effect turning off the growth pathway so the cancer cells would stop dividing.

Their research spurred clinical trials that resulted in the development of Herceptin, a drug that has proven to be the treatment for women suffering from certain aggressive breast cancers once considered to be virtually terminal (see sidebar).

“With the use of Herceptin, and with other kinds of molecular targeted therapies, these tumors can really be better controlled, and a significant proportion of women have actually had long-term survival,” he says. “That’s led to a revolution in how we approach not only breast cancer, but also other kinds of cancers. For years and years we’ve used toxic chemotherapies or radiation therapies or very aggressive surgeries to treat these tumors. Now we’re finding we can develop other types of targeted drugs like Herceptin that can treat various kinds of cancers.

“This is what I’d hoped for when I decided in the early 1980s to go into oncology,” he continues. “I had a vision that some of these things would be happening so that we wouldn’t have to continue to cut, burn and poison people. As an oncologist I’ve always hated to prescribe chemotherapy because I know the risks of side effects, the toxicities that these treatments can engender. It’s been very gratifying see the changes in the past ten to fifteen years.”

His fascination with hormones, which first found root in Clark University’s labs, combined with a semi-obscure study, helped inspire Pietras to apply his research to lung cancer in women.

The 1970s study, which was never reported in full, enlisted two groups of men suffering from coronary disease. One group was treated with estrogens, with the idea that the introduction of the female hormone might reduce their incidence of heart attack. The study was stopped after two years when the researchers discovered an increased incidence of lung disease in the men receiving estrogen therapy. The result begged the question: If a hike in estrogen in men might be linked to lung cancer, what of women, who produce more of the hormone naturally?

Something else merited scrutiny. Increased tobacco use among women since World War II clearly played a role in their greater incidence of lung cancer, but the rising numbers of nonsmokers who contracted the disease was a puzzle. One of the more public cases involved Dana Reeve, wife of the late actor Christopher Reeve, who died of lung cancer in 2006 at the age of 44 despite never having smoked a cigarette. Reeve’s high profile drew attention to a largely invisible medical crisis: Women who didn’t present traditional risk factors were succumbing to lung cancer at an alarming rate.

By the time the National Institutes of Health released the findings of a 15-year study showing that women who took hormone-replacement therapy were more likely to die of lung cancer than women who had a placebo, Pietras was already studying the hormone connection on the suspicion that estrogen was fueling the disease. With grants in 2008 from the Iris Cantor-UCLA Women’s Health Center and the NIH SPORE Program, he and co-investigator Diana Marquez-Garban, M.D., confirmed the presence of estrogen-receptors in lung-cancer cells.

“We found that lung tissue has an enzyme called aromatase that’s responsible for making estrogen, so it’s a little factory in the lung,” Pietras says. “The lung has receptors to respond to estrogen, and those receptors promote the growth of lung tumor cells.”

With the collaboration of Drs. Ed Garon and Lee Goodglick, Pietras is helping to direct two clinical trials to determine if drugs like anti-estrogens and aromatase inhibitors that are commonly used to treat breast cancer can be repurposed and deployed against lung cancer. 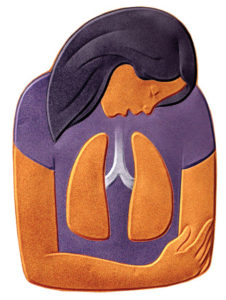 Reaching that point is a lengthy, grueling process. A clinical trial requires years of research and testing before the Food and Drug Administration will consider a drug for approval, Pietras says. Typically, the first two phases can be conducted by a research team with funding from small grants (such as the Gateway and Hickey foundations in his current trials), but the third and final phase often involves thousands of patients as well as the partnership of a large pharmaceutical company with sufficient resources to fund the work, which can run into the billions of dollars. Herceptin, for instance, was developed in tandem with the conglomerate Genentech.

The situation is compounded by the fact that research dollars have declined markedly, Pietras says. Federal funding has been curtailed in recent years, and many private foundations, staggered by the financial crisis, were forced to cut back their donations. He notes that the retiring director of the National Cancer Institute, Harold Varmus, cited a 25 percent reduction in cancer research funding from the National Institutes of Health over the last decade.

“It comes at a bad time,” Pietras acknowledges, “because with all the information we have from the gene project, and all the new information coming to the fore on the hope for immunotherapy, we have fewer dollars to move things forward.” Indeed, new immunotherapies that can train the body to recognize cancers as foreign invaders and then kill them — in essence becoming its own defending army — are already offering new hope to lung cancer patients, he says.

While funding in the United States is relatively stagnant, Pietras points to China and other Asian countries that are investing many billions in research and may well take the lead in pioneering oncology research and technology going forward.

Lung cancer research, already underfunded, enters the arena with one hand tied behind its back. Despite the disease’s heavy toll, it lags well behind breast cancer, prostate cancer and other diseases in research dollars because it lacks the advocacy infrastructure needed to draw the public’s attention, Pietras says. For instance, there is no lung-cancer equivalent of Susan G. Komen, the nonprofit foundation that has heightened awareness and raised nearly $1.5 billion for breast cancer research, education and support programs. Lung cancer advocacy organizations are now emerging, he says, having learned lessons from others.

“It’s true that the squeaky wheel gets greased,” he says. “You have an enormous allotment of money at the federal level and from foundations when you have a strong advocacy group.”

Public sentiment that lung cancer patients are “guilty of smoking” and perhaps deserve their fate continues to shape attitudes toward the disease. That the survival rate for lung cancer patients is poor compared with many other diseases — in the first five years most patients with advanced lung cancer will pass away — further chips away at donations because there aren’t survivor groups to lead the charge, Pietras says.

None of that dissuades him. Indeed, Pietras finds endless inspiration in the women who have volunteered for his clinical trials. The mother, battling for her next breath. The daughter, hoping she has many more years. The sister, refusing to be broken.

“Our patients show incredible courage and conviction to put up with these trials,” he says. “All the people who participate in trials enter an arrangement where they know the drug may or may not help them. What they do know is the information gained may help other people. These women are our driving force.”