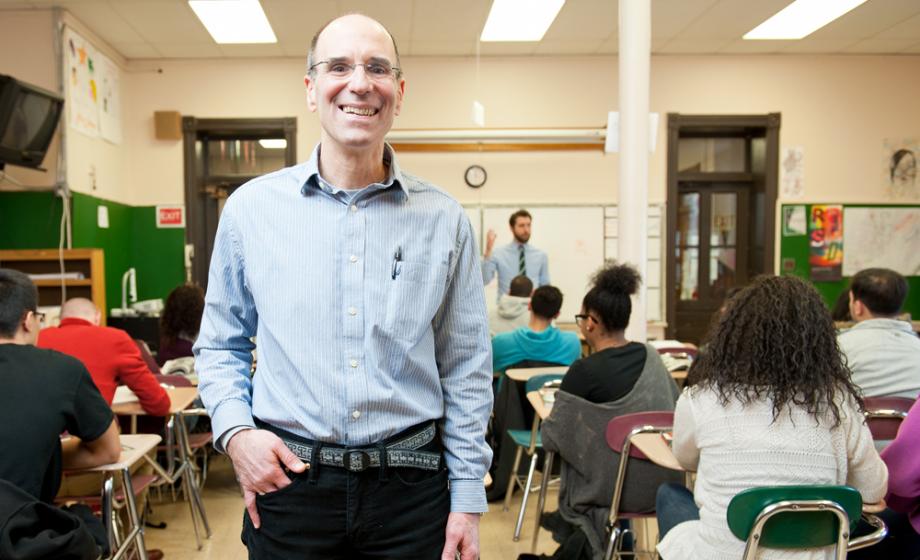 A unique group of schools in the Main South neighborhood, in close partnership with Clark University, is drawing attention for its laser-sharp focus on student needs.

The Innovation Schools neighborhood partnership, the first such cluster in Massachusetts, offers a new approach that allows schools to operate with both more freedom and personalization.

“This is a pre-K-16, cradle-to-college approach,” says Ricci Hall ’97, M.A.Ed. ’98, principal of Claremont Academy. “It speaks not just to academic success but the success of the whole child—social, emotional, and career. This is bigger than the content we can teach them.”

Within close proximity to each other in the Main South neighborhood, Woodland Academy, the Goddard School of Science and Technology, University Park Campus School and Claremont Academy implement promising new ideas and foster the autonomy that is a hallmark for any innovation school. Employing a layered mix of tailored educational approaches, community support, dedicated faculty and staff, and tenacious students with an eye toward success, these schools foster a dream of college education and turn it into a reality.

The Innovation Schools collaboration allows local students to take Clark courses and use campus facilities while still in high school. In turn, Clark students work at the schools as teacher interns and volunteers.

Claremont and University Park Campus School, both grades 7-12 schools, strive to qualify all students for college, including Clark, where they can attend tuition-free. UPCS has led the way in Main South for more than a decade, with almost all students qualifying for and attending college for at least two years. Claremont is following a similar path, with all students from the class of 2015 accepted into postsecondary education. Given the challenges many of these students face—financial, language-related, cultural—the numbers are impressive.

Clark’s long history of educational collaboration with Worcester Public Schools was launched with the 1997 opening of the University Park Campus School, the crown jewel of the University Park Partnership formed in 1995 between Clark and the city of Worcester to foster a vibrant Main South community. A collaboration of Clark and the public school system, the University Park Campus School aims to keep students on a college track with individualized approaches that take into account the students’ societal and cultural realities. When the state introduced legislation in 2010 to provide for innovation schools, the Clark cluster already had begun to form.

“Part of the theory of action for UPCS was that the school could serve as a stabilizing force to keep people in the neighborhood,” says Thomas Del Prete, director of the Adam Institute for Urban Teaching and School Practice at Clark. “Education is a key part of rebuilding the neighborhood, and the Innovation Schools partnership is a key example of how neighborhood schools can work together to create a real educational opportunity for kids who need it.”

St. Louis says the teaching methods employed by innovation schools are not new in the Main South neighborhood. “Schools like us are taking the kids they have in front of them and innovating around those kids,” he says.

St. Louis, who taught at UPCS as a Clark undergrad, says even before receiving the official Innovation Schools designation, University Park had found its groove. “When the legislation came through for us, it codified what we had been developing for a decade or so,” he says.

The students, nearly all who are the first in their families to attend college, find the barrier to higher education isn’t as high as they imagined. By the time junior year rolls around, college seems like a logical step.

Innovation schools give administration more flexibility within the school district’s standards and allow for more autonomy in specific areas like hiring, curriculum, budgeting, and scheduling. For instance, an innovation school can redirect funds from one area to another to meet a need, says Hall.

“We have been working for years now to position the schools in the immediate neighborhood to work in concert and build a pre-K-through-college education campus and corridor,” says Del Prete. “This is a neighborhood approach, not simply an individual school partnership approach. It’s building the sense that college is a normal aspiration and a goal for the kids in the neighborhood that is reachable and achievable.”

The process is made easier because the schools are so close to Clark University. Students from Goddard and Woodland, both elementary schools, funnel into Claremont and UPCS, where they have opportunities few urban students have—namely to feel a genuine sense of connection to a college campus.

The neighborhood cluster is gaining ground as the students continue to achieve success. Visitors from across the country come to Clark to see how the partnership works and use the school’s model to inform their own approaches, reinforcing Del Prete’s belief that what is happening on the local scale will inform the national conversation.

Nationwide, the term “innovation schools” isn’t used consistently. “There are wildly different meanings,” says Steven Hodas, education innovation cluster lead at Digital Promise and a practitioner-in-residence at Seattle’s Center for Reinventing Public Education. “You can project anything you want onto what innovation means.” While the Main South cluster stresses autonomy, it’s also promotes the delicate balance of support from the city school district and Clark. The schools and Clark are also committed to implementing and developing powerful practice. “It’s not only about policy,” says Hodas, “but about practice.”

Hall says that while personalizing education for hundreds of students is a challenge, being able to bounce ideas off colleagues who work in the Main South schools and who know the students is rewarding. And although the curriculum, the budgeting, and the nitty gritty details are the basis for innovation, it’s the way those details take shape in the school setting that makes the difference. The approach considers the students’ needs as they move toward adulthood. They need the book smarts, but they also need to be able to work on teams, to ask questions, and to take the diverse and specific culture of Main South with them on their journey.

St. Louis says the schools constantly renegotiate the best balance for their students. Staff debate standardized testing, and approaches to grammar and math to ensure they spark motivation in the classroom. “You’ve got to find out what is going to work for those kids,” he says. “You need to inspire them to see a better path for themselves that leads to something great. Our job as teachers, leaders, secretaries, and custodians is to hold these kids to something better. That’s the innovation part.”

Del Prete notes that innovation schools reveal the need for deeper action on a number of issues that are intertwined with students’ lives, like affordable and accessible health care, safe and affordable housing, and early childhood educational opportunities. And for Clark students who work in the Main South schools, the exposure to that unfamiliar reality can be illuminating.

“The challenge for Clark students is to come to grips with the privilege in their lives,” says Del Prete. “As they enter the lives of the kids in these schools, they can see tremendous potential and capabilities, but they also realize their trajectories, needs, and resources are different. Their life journeys have not been the same. Those who would teach learn to believe in and support who the kids are and all that they can become.”

Both sides take the bond seriously. “Clark feels like they are us and we feel like we are Clark,” says St. Louis. “Our kids know they have a college path in place for them and the partnership ensures that. There’s perseverance on the part of the schools to give the message that we will never give up on you.”