Speaker advises how to turn the tide on Boston flooding 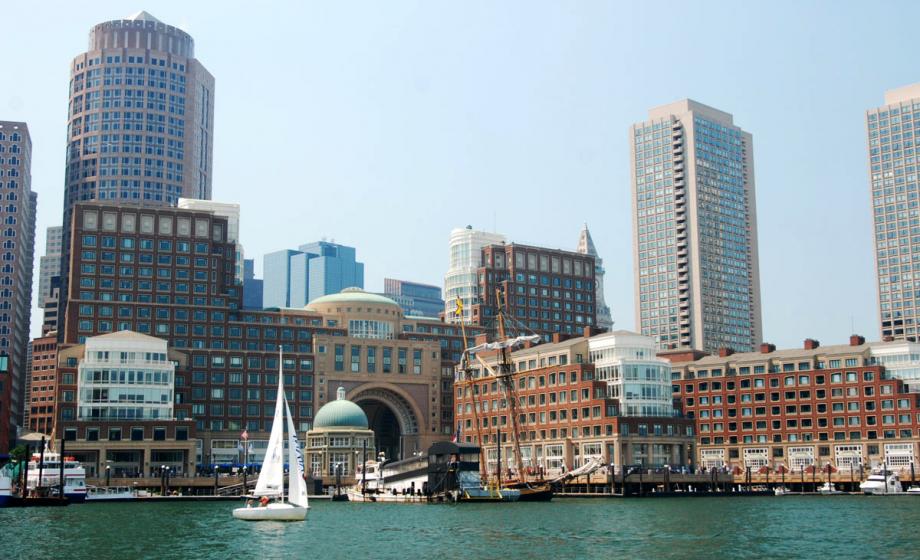 For coastal cities facing their own invading force — rising sea levels — resistance may indeed be futile, but resilience and creativity could be the keys not only to surviving, but thriving.

That was the takeaway message of Julie Wormser, executive director of The Boston Harbor Association, in her Feb. 11 lecture in Clark University‘s Higgins Lounge. The presentation was sponsored by the Higgins School of Humanities, the Mosakowski Institute for Public Enterprise, and a New Earth Conversation.

Wormser began her talk with a look at the ravages of Superstorm Sandy, which in October 2012 devastated the New York and New Jersey coasts while causing limited damage to the city of Boston. She explained that Boston Harbor boasts 34 coastal islands, an offshore undersea mountain range and a “dramatic” tide cycle that offer natural protection, while New York harbor has no similar advantages to stem rising waters. A 30-foot wave, she noted, will be reduced to two feet by the time it reaches Downtown Boston.

What is the likely sea-level rise for Boston? One to two feet by 2050, three to six feet by 2100, Wormser said. But those numbers don’t take into account glacier melt, she added, leaving areas like Boston’s Innovation Districts — situated in the South Boston Waterfront and nicknamed the “Inundation District” by those recognizing the potential flooding hazards — in a vulnerable position.

So how best to institute flood prevention while preserving economic and cultural vibrancy?

Boston has taken steps to prepare for a wetter future, including updating its climate plan to focus on preparedness. Wormser also co-led the “Boston Living With Water” international design competition, along with the city and Boston Society of Architects. One of the winners, appropriately, was from Venice.

Wormser said “resilient” design allows for some water to penetrate at lower levels during a major storm, and elevates usable spaces and vulnerable resources like computers or mechanicals. For instance, a hospital would want to locate an intensive care unit on an upper floor, and a museum would store valuable art on a higher level, she said.

Utilities and infrastructure across the city need to be designed to reduce their vulnerability to flooding. It doesn’t serve the common good if one well-planned building remains unaffected by a storm surge while the rest of the neighborhood is underwater, she said.

The Dutch, who are renowned for their flood-containment methods, advise the construction of sturdy levees, but also recommend that buildings be located beyond a “transition zone” — an area, like a marshland, that can flood without harm, Wormser said. This flexible approach promotes the idea of “living with water” rather than trying to shut it out, an increasingly fruitless pursuit as sea levels rise.

Storm-surge preparation costs money, she said, but investment can be incremental. A $50 billion proposal to create a barrier by building a wall linking the 34 Boston Harbor islands is unlikely to get off the drawing board any time soon, but incentivizing developers to “make it normal to prepare for climate change” in their building designs will help, she said. Municipalities should also look to solve other problems — infrastructure, transportation, etc. — in their flood preparations to gain maximum return on investment.

Wormser noted that today’s 100-year flood could be an annual occurrence by 2050, and be a twice-daily high tide by 2100. Unchecked, up to a third of Boston could be regularly flooded. Smart preparation and responsive design are good steps to minimize that risk. “Boston will be different,” she said. “But it doesn’t have to be worse.”

This event was part of the Higgins School of Humanities’ spring dialogue symposium, “What’s Next?” Click here for more information on the symposium, as well as of upcoming events.