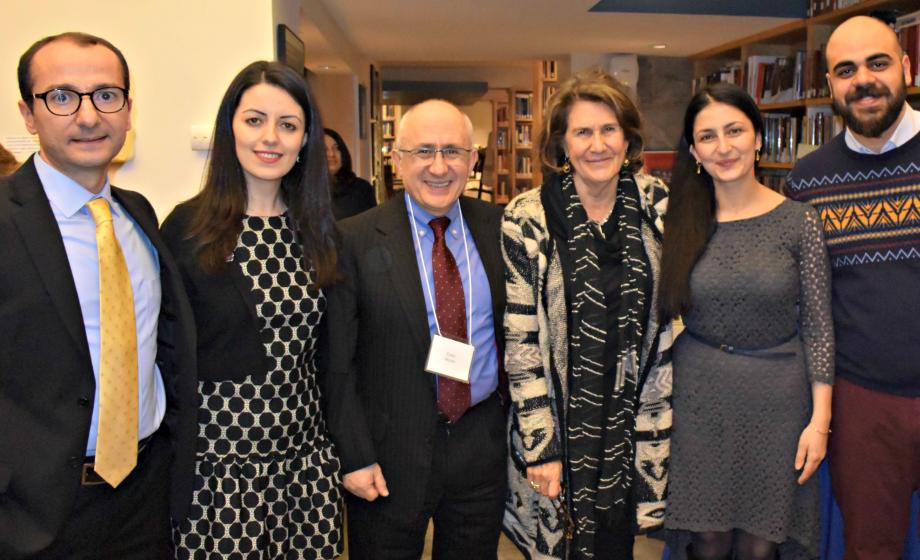 Mouradian defended his dissertation, Genocide and Humanitarian Assistance in Ottoman Syria (1915-1917), before Professors Taner Akҫam and Debórah Dwork, who served as co-directors of his dissertation committee. Raymond Kévorkian, director of the Nubarian Library in Paris, served as the third committee member.

“He is not only the first Doctor of our Armenian Genocide track but also the first doctorate in North America after so many years of silence in the field.”

The event also celebrated Asya Darbinyan, a third-year doctoral student who defended the prospectus of her dissertation, Russian Response to the Armenian Genocide: Humanitarian Assistance for Armenian Refugees on the Caucasus Frontline of WW1 (1914-1917).

Dwork, director of the Strassler Center, commented on both milestones: “The award of the first Ph.D. in Armenian Genocide Studies is a huge step forward in the field. Happily, the first recipient is followed by a robust pipeline of students pursuing groundbreaking dissertation projects. The Armenian Genocide continues to be beset by deniers. These young scholars’ research shows how risible such arguments are. Scholarship trumps propaganda.”

Mouradian is currently a visiting assistant professor at the Division of Global Affairs at Rutgers University and is the coordinator the Armenian Genocide Program at Rutgers’ Center for the Study of Genocide and Human Rights (CGHR). He teaches courses on imperialism, mass violence, and concentration camps in the history and sociology departments at Rutgers. Mouradian is also an adjunct professor in the philosophy and urban studies departments at Worcester State University, where he teaches courses on urban space and conflict in the Middle East, genocide, collective memory, and human rights.

Mouradian was the editor of the Armenian Weekly from 2007-2014. The recipient of numerous awards, Mouradian held the Gulbenkian Armenian Studies research fellowship in 2014 to study the Armenian community in China in the 20th century. The Organization of Istanbul Armenians awarded him the first Hrant Dink Freedom and Justice Medal in 2014.

Carolyn Mugar and her late husband John O’Connor ’78, who was a Clark University trustee, donated the first-ever endowed Chair in Modern Armenian History and Armenian Genocide Studies at any university. They challenged others to join them in supporting this innovative professorship named in honor of Carolyn’s parents Stephen and Marian Mugar, as well as Robert Aram ’52 and Marianne Kaloosdian. Clark alumnus Robert Kaloosdian, a lawyer in Watertown, MA, and former president of the Washington, D.C.-based Armenian National Institute, is a leader in Armenian affairs. In 2002, the Kaloosdian Mugar Chair was established in the History Department and as a constituent member of the Strassler Center for Holocaust and Genocide Studies.

Taner Akçam joined Clark University as Kaloosdian/Mugar Professor in fall 2008. A leading genocide scholar and an authority in the history of political violence and torture in late Ottoman and early Republican Turkey, Akçam is the first scholar of Turkish origin to acknowledge the Armenian Genocide and to publish groundbreaking research on this topic.

Clark University is committed to scholarship and inquiry that addresses social and human imperatives on a global basis, and has played a prominent role in the development of several academic disciplines, including psychology, geography and interdisciplinary environmental studies. The pioneering Strassler Center program in Armenian Genocide Studies embodies the University’s history of academic innovation.