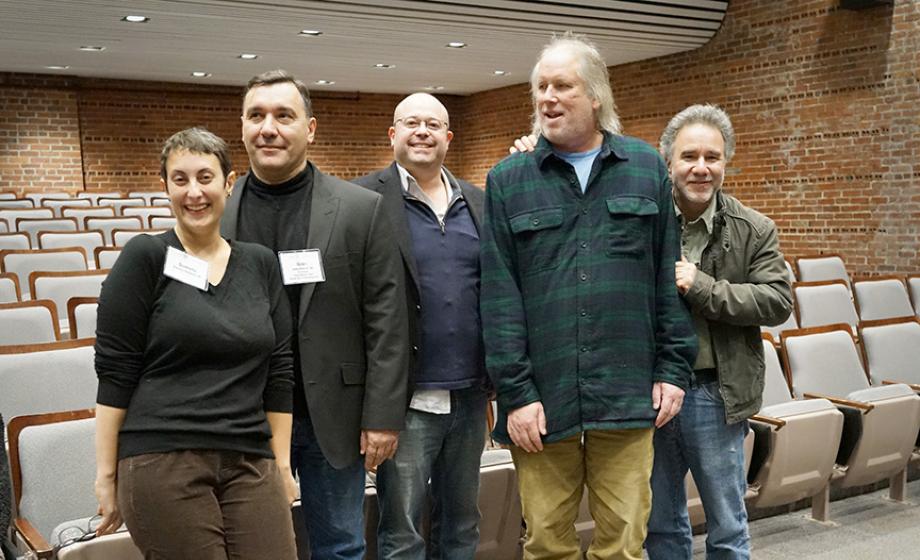 Jefferson 320 hosted Clarkies from across the decades for the January 26 showing of the film “Home,” with executive producer Dan Zisson ’95 and producer Daniela Barbosa ’00 on hand to describe the process of bringing the story to the screen.

“Home” details a young man’s struggle with mental illness and the personal obstacles he must overcome to achieve his independence. Joining Barbosa and Zisson on stage for the Q&A session was costume designer Pattie Barbosa, who is also Daniela’s mother. Gino DiIorio ’83, the Klein Distinguished Professor of Visual & Performing Arts, moderated the panel.

“You stay involved, keep a lot of balls in the air. I was able to make a lateral move into film.” —Dan Zisson ’95

Zisson and Barbosa recalled their journeys from Clark University students to film industry professionals. After graduating, Zisson interned at the Almeida Theatre in London working for actor Ian McDermott. He knew he’d be in the performing arts full time. “You stay involved, keep a lot of balls in the air,” he said. “I was able to make a lateral move into film.”

Barbosa was a double theater and studio art major, who planned to attend graduate school for stage management. While interning as a production assistant on the hit TV show “NYPD Blue,” her mentor told her she was “going to be in film.” She then worked on the movie “Don’t Say A Word,” where one of her tasks was to help blow up a car.

Barbosa decided not to pursue grad school and has been in the TV and film industry ever since. She currently works on the popular CBS show “Blue Bloods,” about a New York police family, starring Tom Selleck, Donnie Wahlberg and Bridget Moynihan.

Barbosa recalled her first encounter with “Home” years before the film had even reached the financing stage. Writer-director Jono Oliver, whom she’d met on the set of “Don’t Say a Word,” asked Barbosa to do some pre-production work for him. After reading the poignant script, she told him, “If you ever shoot this film, I want to do it.”

The “Home” cast mixes unknown actors with recognizable performers Joe Morton (“Scandal”) and James McDaniel (“NYPD Blue”). Wahlberg was set to have a small role but was forced to drop out due to other obligations (his concert tour with New Kids on the Block had been unexpectedly extended). Wahlberg initially was interested in playing Jack, but Oliver felt strongly the lead role be played by a person of color (the part would eventually go to Gbenga Akinnagbe), and wanted to stay true to his vision of the film, Barbosa explained.

Financing “Home” was a challenge. “No one gives you a bag of money,” Barbosa said. The production team launched a Kickstarter campaign that raised $30,000. They worked on some product placement deals and borrowed some equipment from “Blue Bloods.”

“We still needed more funding,” Barbosa recounted, “so I thought, ‘Who can I call?'” That’s when she brought in Zisson to help secure more investors.

Filming took place over the course of 20 days, rather than a typical 50 to 60 days.

The budget was tight. Actors were paid $100 a day for their work, and extras were paid less, sometimes just with free meals.

“There are three reasons to do a project,” Zisson said. “One is because you love it; another is for the people involved. And the third is for money. With this film, we had two of the three.”

DiIorio described the film as “a story of heroism on a small level,” where these “small moments actually hold huge weight for the characters. You could tell everyone working on it really believed in it.”

Zisson and Barbosa said producing doesn’t end when the camera stops rolling. “You think the final goal is to finish your movie, but that’s just your beginning. Your film is done, now what? Post-production is a third of the movie,” said Zisson. “You need to pay for music, edit and then try to distribute.”

Barbosa and Sisson couldn’t get “Home” accepted into the Sundance Film Festival, so they did the next best thing: they held a guerilla screening at a nearby venue. Barbosa remembers one audience member’s visceral reaction to the film. He left the room and told her, “[The movie is] really beautiful. I can’t watch it. It’s too real.” He opened up to Barbosa about his own family’s struggle with mental illness. “Everyone knows someone affected by this. The film gives people hope,” she said.

Critics have praised “Home” for its direction and performances. Oliver was nominated for an NAACP Award, and the feature won the 2014 Substance Abuse & Mental Health Services Administration Voice Award, Best Feature Film in Mental Health at the 2014 PRISM Awards, and other accolades.

“Home” is available on Netflix and iTunes. Zisson is working on international distribution.