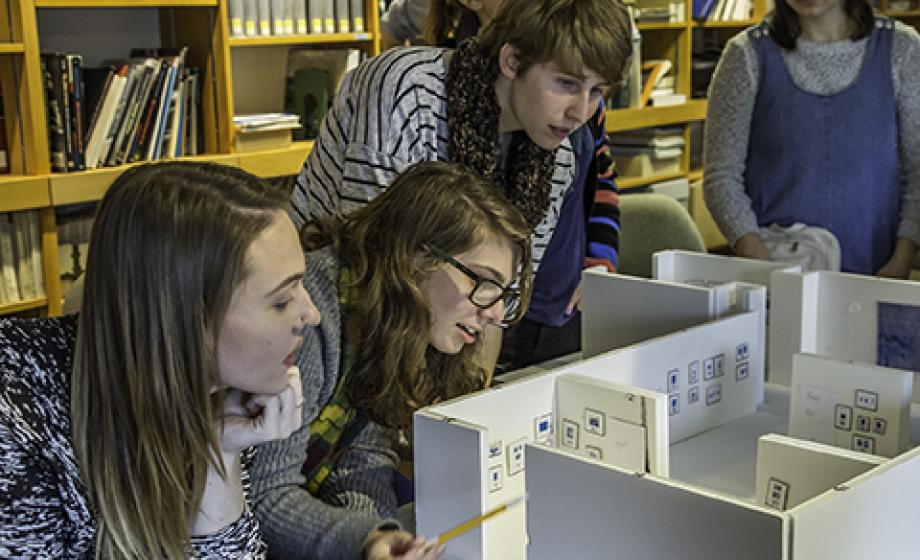 The Worcester Art Museum’s current exhibition, “Cyanotypes: Photography’s Blue Period,” is a bit of unfolding history. It’s the first major museum exhibition in the United States exclusively devoted to the 150-year legacy of this long-overlooked technique that gives photographs a distinct blue tint, turning even mundane images into something ethereal.

And Clark University has played a significant role in making this event happen.

The cyanotypes exhibition came to life through a collaboration involving Kristina Wilson, associate professor of art history, Nancy Burns, the museum’s assistant curator of prints, drawings and photographs, and 11 Clark students, who helped research and organize the event over the course of a semester-long seminar taught by Wilson and Burns.

“Two years ago, Nancy and I started talking about collaborating on an exhibit and getting students involved. The original impetus was to bring students into the museum and give them exposure to the level of work needed to research and put together an exhibition,” Wilson said. “My goal was for them to have a sense of ownership over the whole project, and I think they do.” 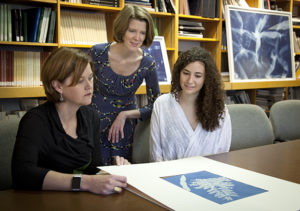 The students have contributed deeply researched essays to the exhibition catalogue (in addition to longer class presentations) that, for some, provided an opportunity to visit galleries and museums, speak with artists’ representatives, and reconstruct histories of photographers both renowned and obscure. Aviv Hilbig-Bokaer ’17, an international development major, enjoyed one-on-one meetings with gallery representatives in San Francisco and New York to augment his research and expose him to recent works by Christian Marclay and Marco Breuer, whose pieces are in the exhibit.

“I was welcomed with open arms and cappuccino,” he said with a laugh during the final classroom session before the end of the fall semester. “The experience opened my eyes to the world of galleries and the explicit commodification of art. It was fascinating to be brought into these contemporary worlds where art is being sold and to think about it in that sense.” 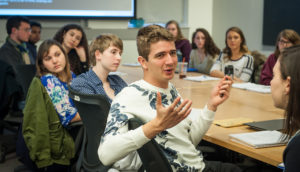 Alex Gray ’17 landed an interview with artist Annie Lopez, who described the origins of her haunting piece, Medical Conditions. “Without this interview, I would not know that Medical Conditions includes an image of Lopez’s own x-rayed arm or understand the significance of the piece as a culmination of anxiety about her father’s Alzheimer’s,” Gray writes in her blog on the museum’s website. “Speaking with the artist allowed me to connect her raw emotions of fear and anxiety with my own experiences, allowing me to deeply analyze the piece.” (All the students’ blogs can be read here.)

Each student researched and profiled a specific artist and wrote labels for 22 of the 78 pieces in the show to shape a narrative history of cyanotypes that falls within three distinct categories: Figure, Form and Place. The Clark students will be stationed throughout the gallery at the Feb. 18 opening reception to give tours and describe the stories behind the images — the personal and cultural influences that contributed to the artists’ aesthetic choices. The exhibition officially opened Jan. 16 and runs through April 24.

“It’s both a professional experience and genuine learning experience,” says Abby Moon ’17, who is eyeing a career in museum work. “We get to interact with this art, but we’re also making contacts in the world, calling galleries, visiting museums to see art privately, writing our own labels. The work is very, very real.”

Wilson noted that the research posed challenges, since very little has been written about cyanotypes in most of the canonical texts on the history of photography. As she writes in the Worcester Art Museum magazine Access, the cyanotype process was invented in 1842 by British scientist John Herschel, and was popular up until World War I because it was a “quick and easy way to produce a photographic image. One simply had to procure readily available chemical solutions of iron and salt, mix them together, and brush them onto absorbent paper. Once the paper had dried, it was ready to be exposed in the sunlight.”

Still, the ease and accessibility with which one could produce cyanotypes also led to their undoing because accomplished artists considered their creation a technical exercise rather than fine art — the refuge of amateurs. The color was also problematic for the opinion-makers of the day, who dismissed the blue hue as unnatural and embraced black and white as the acceptable standard. 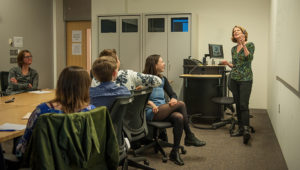 Cyanotypes enjoyed a resurgence in the 1970s that picked up steam in the 1990s. The form has been kept relevant by a corps of contemporary artists like Christian Marclay and Meghann Riepenhoff, who have expanded the medium’s range and expressiveness.

Wilson’s students worked closely with Burns and the museum staff to learn the details of how an exhibition comes together. They met with experts on matting and framing as well as exhibition design; they learned from a paper conservator and even consulted with a graphic designer about the catalogue’s presentation, right down to the choice of fonts. Burns supplied the insider’s perspective on making targeted acquisitions of art and securing loans from private collectors and galleries.

“So much research is required to make an acquisition that it does, in a way, become your own,” Burns told the students. “When you see the object at the museum you’ll always have a different relationship with it.”

Burns’s insight into the “pragmatics” needed to pull off a show resonated with students.

“It wasn’t just about writing labels and writing for the catalogue; it was meeting with the marketing team, learning how to do tours, learning why this color of paint was chosen for a wall,” said Casey Shea ’16, a double major in art history and studio art. “The public sees what’s on the wall, but we get to see the background of how it got there.”

Wilson said her students are excited about their part in fashioning this first-of-its-kind exhibition, adding that the benefits of this special partnership between university and museum are enduring for all involved.

“The collaborative sharing of resources in this class has helped us learn from each other,” she said. “We as a group created far more knowledge than any of us as individuals would have been able to do alone.”

“Cyanotypes: An Evening in Blue” will be held Feb. 18, 6 to 8 p.m., at the Worcester Art Museum. Tours will be offered from 6 to 7 p.m. Music, hors d’oeuvres, and a cash bar will be available throughout the event. Contemporary artists featured in the exhibition will also be on hand to celebrate. The exhibit is free with museum admission.