Clark Ph.D. student's post on whether all Muslims should apologize for Paris goes viral
By Matt Cyr 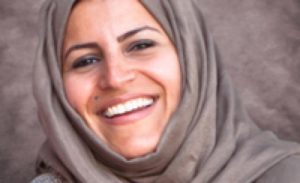 The terrorist attacks in Paris and near Beirut last week have triggered outrage around the world and a military reaction by France. But they have also led to an increase in anti-Muslim public sentiment and calls for all Muslims to apologize for the attacks.

On Sunday, a moment of silence during the football game between the Green Bay Packers and Detroit Lions for the victims of the Paris attacks was interrupted by a fan yelling a derogatory statement about Muslims. (Importantly, Packers quarterback Aaron Rodgers responded to the slur in his post-game press conference: “It’s that kind of prejudicial ideology that I think puts us in the position we’re in today.”)

And a couple in Toronto recently put a sign in their yard asking Muslims if they are “sorry for the slaughter of innocent people.”

Among those who’s asking herself if all 1.5 billion Muslims in the world should have to apologize for the actions of a small group of extremists is Hasnaa Mokhtar (pictured above), a first-year doctoral student here at Clark University.

She’s studying International Development with a focus on women’s and gender studies, but in a blog post she wrote just hours after the attacks in Paris, Mokhtar said, “I prayed with all my strength for the protection of the hostages and well-being of everyone in the city…[but] one plea was buried behind all the noise: Please don’t claim to be Muslim.”

She continued, “Then, what we all dreaded was confirmed: the Islamic State claimed responsibility…I was outraged to witness another violent massacre take innocent lives and distort my faith. I felt helpless because I knew this would provoke an adverse reaction from Islamophobes against us all.”

Mokhtar’s post has since been picked up by Fortune and Teen Vogue.

“Many Muslim women reached out to me saying that what I wrote echoed their feelings,” Mokhtar said. “We’re outraged like everyone else for these terrible crimes. But for some reason some insist to condemn Islam and Muslims for the horrific actions of a few. Mainstream and social media are flooded with so much hate and anti-Muslim messages and threats. The suffering that Islamophobia causes to Muslims must be acknowledged and combated.”

This isn’t the first time Hasnaa has been featured in the media. Last year she was the focus of a cover article in Worcester Magazine as The Face of Feminism.