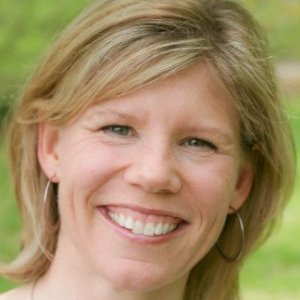 Massachusetts residents consider themselves modern-day road warriors, not always by choice. Much of the highway infrastructure is in disrepair, and public transportation is either so scarce or unreliable that many are forced into their cars for daily slogs into work, to bring their children to school, or do the errands of daily life.

There is a better way, according to Kristina Egan, director of the public-transit advocacy group Transportation for Massachusetts, who delivered the Albert, Norma and Howard ’77 Geller Endowed Lecture Oct. 1 in Tilton Hall. Efficient, accessible transportation is not only critical for moving people and products from place to place, she insisted, but it’s also a social equalizer, an economic driver, and a key factor in the quality of air we breathe.

Egan said transportation can shape or destroy a community, support or strangle an economy. A good public transportation system foments social mobility by making it easier for a worker to reach a place of employment or even obtain quality food; poor transportation options disproportionately affect low-income groups and people of color. “Access determines who gets good jobs, education and food,” she said.

Last winter’s failure of the MBTA’s commuter trains was only a tip of the iceberg when it comes to Massachusetts’ transportation woes, Egan said. One in five roads in the state is deemed in “poor” condition, 40 bridges are categorized as “structurally deficient” and cyclists in urban areas take their lives in their own hands because of the lack of bike lanes.

Beyond that, the number of cars clogging the roads contributes to greenhouse gas emissions in the atmosphere, contributing to climate change, Egan said. The United States has a long way to go to match the eco/user-friendly transportation systems in other countries, like high-speed rail in Japan and bikers-first streets in the Netherlands.

But there have been improvements, like Los Angeles’ increase in rail service since 1990, new bike lanes in New York City, and the establishment of the Rose Kennedy Parkway in Boston, Egan said.

A variety of new technologies and “shared economy” forms of travel have created opportunities for continued progress. Smartphone apps, car services like Uber and Zipcar, hybrid vehicles and more “people-centered” streets are taking hold in urban areas, she said.

Egan urged people to promote positive change within their communities by supporting policies that improve the operation of cars and transportation systems and prioritize transportation spending that provides opportunity to low-income residents and gives consideration to climate-change impact. One way to make this happen is to elect leaders with vision.

“You’ve got to change the political environment,” Egan said.

The Geller Lecture was sponsored by the George Perkins Marsh Institute and Mosakowski Institute for Public Enterprise.