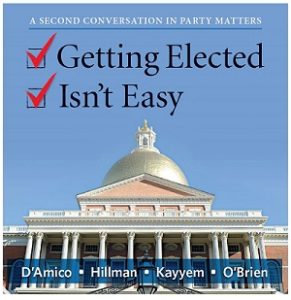 Winning election to statewide office in Massachusetts isn’t easy. Candidates must run a gauntlet of requirements, deadlines, and contests, with many constraints established by the dominating political parties. The rules governing candidate selection affect the quality of our democracy and the ultimate winners and losers of our elections.

The Mosakowski Institute for Public Enterprise and Political Science Department at Clark University and MassPoliProfs will host a panel of esteemed state politicians who will share their experiences within the political process at “Party Matters: The Candidates Speak Out,” a free, public conversation beginning at 4:30 p.m., Tuesday, Oct. 6, in the Grace Conference Room at the Higgins University Center, 950 Main St.

This event is the second of the “Party Matters” conversation series established by the MassPoliProfs, a group of political science professors with a “passion and curiosity for Massachusetts politics.”

Panel members who will share their knowledge, insights, and perspectives on such topics as caucus-convention systems, the 15-percent rule, the September timing of state primaries, ticket formation for Governor and Lt. Governor, campaign financing, and rules pertaining to candidate selection, include:

James R. Gomes, director of the Mosakowski Institute, will moderate the discussions.

After hearing about the candidates’ experiences, an array of political scientists will offer their perspectives on how the system works — or doesn’t — and how it might be improved.

The founders of the popular MassPoliProfs blog, Maurice T. Cunningham, of UMass Boston, Jerold Duquette, of Central Connecticut State University, Erin O’Brien of UMass Boston, and Peter Ubertaccio, of Stonehill College, write: “Each of us reads a great deal about the commonwealth’s government and politics, from daily newspapers and blogs to think tank reports and government documents. In addition, we each read widely in the literature of our field and we aim to bring political science more into the mainstream of discussions about Massachusetts politics.”

“In any contest, the rules matter. They may apply equally to all contestants, but they will inevitably work to the advantage of some candidates and to the detriment of others. This event will offer a chance to hear from some very savvy observers of how our political system actually works, and to hear some thoughtful ideas for how it can be improved.”

For more information about the Oct. 6 event at Clark, please contact Lisa Coakley at the Mosakowski Institute, at lcoakley@clarku.edu.