Standing strong and proud for more than a century, the three European copper beech trees in Clark University’s Kresge Quadrangle in front of the Arthur M. Sackler Sciences Center now number only two. Crews braved a driving rain Tuesday to remove the diseased tree before it became a hazard.

Biology Professor David Hibbett, PhD, chronicled both the demise of the tree and the unusual mushrooms that grew on its trunk in blog posts published in October 2014 and May/June 2015. The most recent post showed images of the tree standing with bare limbs next to its counterparts featuring branches filled with leaves. According to Hibbett’s October post, several other similar trees near the campus have died or are dying.

The Clark community shared memories of the tree after this photo was posted on the University’s Facebook page with several users saying they spent time learning or just watching the world go by while sitting beneath the tree. 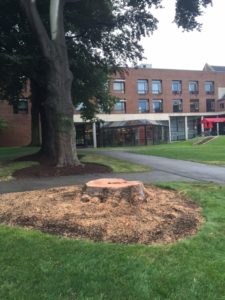 Others expressed their dismay over the tree’s death.

“Oh no, I always liked that tree,” Sarah Bilotta said.

Hibbett, who wasn’t on campus this week to see the removal, said there’s a plan to polish a slice of the tree and make it into a university timeline using its annual rings. Hibbett said the piece likely would be displayed in the atrium of Lasry Bioscience.