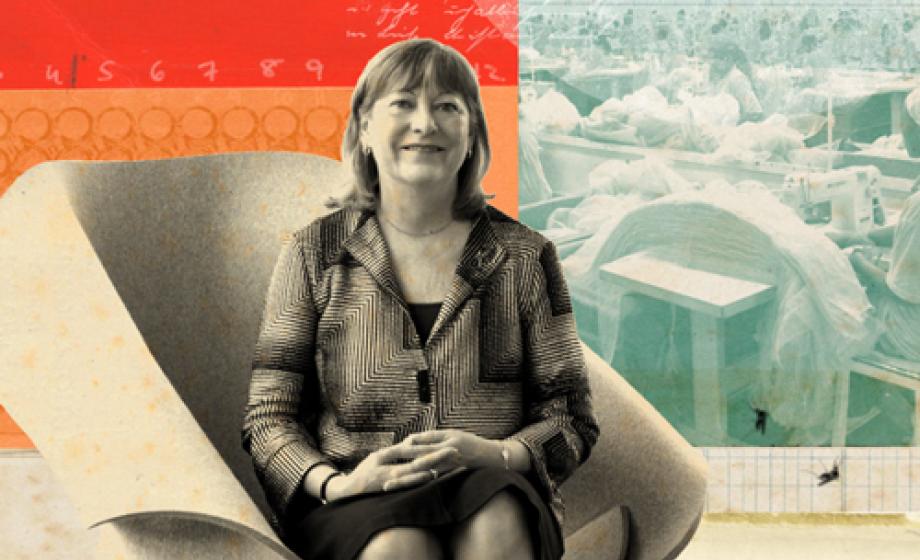 JANICE CULPEPPER ‘77 remembers visiting a one-room hospital in Tanzania, with 30 children crammed onto five twin beds. Their mothers slept on the dusty floor, standing guard as their babies lay hooked up to IVs, receiving medicine to keep them alive.

She knows better than anyone that this scene is duplicated in hundreds of health care facilities across Africa, where workers do their best with limited resources to handle the steady flow of children and adults infected with malaria. About 207 million people worldwide were treated for the disease in 2012, and 627,000 died. Seventy-seven percent of the deceased were children under the age of 5.

As a senior program officer on the malaria team at the Bill and Melinda Gates Foundation, Culpepper doesn’t like those numbers. And neither does her boss.

In their annual letter released in January and titled “Our Big Bet for the Future,” Bill and Melinda Gates wrote: “We won’t be able to completely eradicate malaria by 2030, but we will have all the tools we need … to send malaria the way of smallpox and polio.”

It’s an ambitious prediction — “a big, audacious goal,” Culpepper says — but she’s on board with Bill Gates’ assertion that he wants malaria wiped out in his lifetime. He’s now 59. 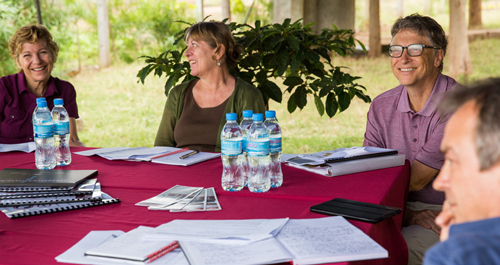 Culpepper didn’t start out to be a disease warrior. At age 9 or 10, she told her mother that she planned to be a doctor, but soon realized she’d be happier on the research side.

The daughter of an oilfield worker, she spent several formative years in Singapore. When it came time for college, her parents were adamant that their daughter return to her native Oklahoma and attend a university somewhere near her grandparents.

“My parents didn’t want me just wandering around the world on my own. We made a deal that I would do one year at the University of Oklahoma and if I didn’t want to stay there, then I could apply to other schools. They preferred I go somewhere where I knew someone.”

Her high school classmate, Susan Ewert ‘77, had enrolled at Clark as a psychology major.

“Basically, I said, ‘Does Clark have a biology program?’ I never visited Clark, never talked to anyone. I just applied, got in, and showed up.” Culpepper enjoyed her time at Clark (so much so she returned to serve as a trustee from 2006 to 2012). Worcester, and its climate, was a bit of a surprise. “I’d never lived any place with so much snow and cold, and I’d never really lived in a city like that. This was a different environment, but I liked it, and the Biology Department.” After graduating with a biology degree, she earned her doctorate in biological chemistry from Harvard University. “I did what at that time was considered a bit of a bold move: I went off and completed my first post-doc with a fledgling biotech company in Palo Alto, California,” she recalls. “My thesis adviser pretty much disowned me on the spot — from her viewpoint I was wasting my education to go work for some fly-by-night company. At that time, the number of biotech companies in the world was two, maybe three. They were all tiny, and nobody knew if they were going to make it.” 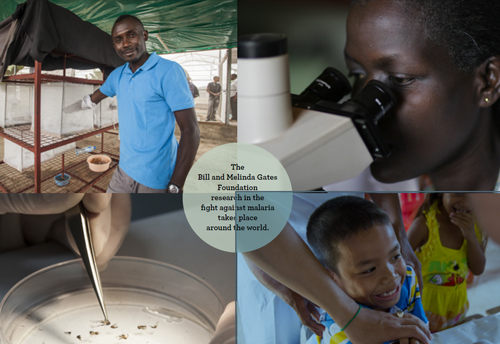 Her post-doc at DNAX Research Institute (which by then was part of the pharmaceutical company Schering-Plough) was followed by a second fellowship in parasitology at the University of California-San Francisco, which prompted her interest in global health. Subsequent stints at biotech companies brought her to Millennium Pharmaceuticals in Massachusetts to head the group responsible for providing high-throughput DNA sequencing and genomic techniques.

From there she went to Structural Genomics in San Diego and eventually became senior vice president of alliance management, working as the liaison between the scientists and the business people to manage their partnerships with Big Pharma. “That’s when I really quit working in the lab and got much more involved in the management of science,” she says.

That experience has served her well at the Gates Foundation, which Culpepper calls “a virtual organization.”

She explains: “We fund others to do work for us. My job is working with scientists and, to some extent, with Big Pharma and other companies that are doing projects for us so that we can understand what they’re doing and what their challenges are. The Gates Foundation is very data driven.”

The data is helpful to the Foundation’s role as a philanthropic venture capitalist. “Any venture capitalist will tell you that they have to understand their return on investment. We are a charity, but we’re a charity that’s trying to figure out how to get the best return.”

Before joining the Gates Foundation’s malaria team in 2007, Culpepper wasn’t fully aware of the disease’s impact. Her background in parasitology and her work on antimalarial drugs at the Institute for One World Health in San Francisco gave her a molecular view, literally, of malaria.

“I had some general understanding,” she says, “but I didn’t understand the global burden of the disease.”

Since its creation in 2000, the Gates Foundation has made malaria a top priority, committing more than $2 billion in grants to combat the malady.

Malaria, which occurs in nearly 100 countries worldwide, exacts a devastating toll on human health and imposes severe social and economic burdens in developing countries, particularly in Sub-Saharan Africa and South Asia. The disease is spread through parasites transmitted by mosquitoes and can cause high fever, chills, flu-like symptoms, and severe anemia. The symptoms are especially dangerous for pregnant women and young children and can result in lifelong intellectual disabilities.

“Most adults won’t die from malaria,” Culpepper says. “The majority of people who die each year are children under the age of five. Some will end up in a health care facility, but those facilities aren’t very well equipped.” Because it had IV treatments for its young patients, that tiny hospital in Tanzania, though primitive, was actually ahead of the game, Culpepper says. “A lot of places are much worse.”

Why or how malaria kills is still a mystery. “Basically, your red blood cells get infected, and then they burst,” Culpepper explains. As the infection worsens, it alters the cells’ shape and behavior. “Cerebral malaria is the biggest killer of children, and the cells actually clog up the capillaries in the brain,” leading to swelling of the brain and, potentially, coma and death.

Pregnant women are very susceptible to placental malaria. “This is an area that a lot of people are studying. It’s probably not one mechanism; it’s probably a number of different mechanisms that we just don’t control very well.”

Part of the Gates Foundation strategy is to ensure that all individuals infected with malaria are treated to prevent the disease from spreading. Culpepper notes that a large number of people in endemic communities have malaria, but don’t exhibit any symptoms. “After you’ve had malaria a few times, you develop some immunity, but it’s not enough to keep you from being infected. It just keeps you from feeling really horrible,” she says. These chronically infected patients can transmit malaria back to mosquitoes.

Culpepper likens patients with asymptomatic malaria to Typhoid Mary: “They’re the reservoir from which all the malaria comes.” The key, she says, is to work with villages and districts to bring the disease under control as quickly as possible.

“We have a whole set of people working on what we call our ‘elimination initiatives,’ who are funding work in countries to essentially try different ways of screening large numbers of people for malaria and treating them to wipe out the reservoir.”

Culpepper’s work is most closely aligned with the development of antimalarial drugs, and she’s seen tangible progress since her early days at the Foundation. “We have a very rich pipeline” of promising drugs, she says, and field trials are being conducted in Africa to evaluate the safety and efficacy of these drugs.

“There’s also been a lot of good work on the vaccine side,” she says. “We’re working on developing some new, more sensitive diagnostics, and also on getting new active ingredients that can be used on bed nets. That’s the cornerstone of malaria control.” Resistance to drugs and insecticides has proven to be a threat, so development of new chemicals is important.

Since she began at the Foundation, Culpepper’s job has evolved from “down-in-the-weeds science” to more of a50/50 split between science and strategy. She’s been part of some “deep dives” into drug development, and also participates in broader team planning.

People in some areas of Cambodia and Thailand are exhibiting increased resistance to existing drugs, which means it takes longer to kill certain malaria strains. The goal in such cases is containment, and “the only way we can achieve that is through elimination,” Culpepper says.

The Foundation has made strides in Zambia and Swaziland. Reaching near-elimination in Cambodia, Thailand, and Vietnam by 2030 is a reasonable goal, she insists. “We’re hopeful,” Culpepper says. “We have plans for certain countries where we hope to see real progress. If we don’t, it’s not going to bode well for the rest of the strategy.”

Malaria is such a constant presence in Africa that despite its enormous death toll it rarely earns much media coverage. Not so for Ebola, whose resurgence in 2014 drew worldwide attention.

The outbreak spurred the Gates Foundation to provide emergency funding for Ebola work, and pulled some human resources away from malaria efforts “so we weren’t able to accomplish some things as quickly as we wanted to,” Culpepper says.

But the Ebola crisis actually helped the malaria team refine its approach. Malaria and Ebola initially present with the same symptoms, so in Africa people with malaria were being shunned and not receiving the necessary treatment. They were in real danger of dying from the disease.

In Sierra Leone, Doctors Without Borders conducted widespread administering of antimalarial drugs to help determine who might be infected with Ebola. “It was an interesting experiment that we never would have done, but we’re trying to learn from this,” Culpepper says. “As an organization we talk about how to use this emergency as an opportunity to make other countries improve their health infrastructure to better deal with their malaria cases.”

Culpepper and her colleagues at the Gates Foundation are committed to realizing that opportunity. She insists the treatment of malaria will continue to improve as they march toward the goal of near-elimination by 2030.

“Some people say it’s been the most exciting time to beat the Gates Foundation and to see the impact we’ve had over the last five or ten years,” she says.

But no one will rest until they realize the ultimate payoff of Bill and Melinda Gates’ “Big Bet.” “We still have big plans.”