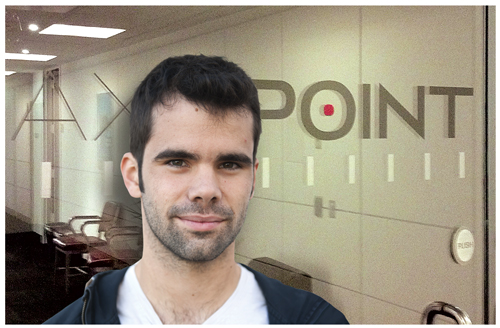 Neil Orzechowski ’15 had the time of his life as a LEEP Project Pioneer. He just can’t talk about it.

Orzechowski spent last summer working at Axispoint Inc., a New York-based company that is on the cutting edge of developing complex software applications and information technology solutions for large organizations. The company’s client list reads like a Who’s Who of corporations, entertainment companies, nonprofits, health care organizations and government entities.

“I had to sign a nondisclosure agreement since the project I was working on was proprietary,” says Orzechowski. He can only reveal that he worked on a four-person team developing a large-scale Web application for computers, tablets and mobile devices that challenged him to combine his knowledge of JAVA — a programming language he learned at Clark — with other unfamiliar open-source languages he mastered on the job.

Orzechowski’s experience was made possible thanks to Clark alumnus Dan DiSano ’90, president and chief executive officer of Axispoint. “From day one, I wasn’t just another intern; I was treated like an employee,” says Orzechowski. “The team architect gave me the same responsibilities as everyone else. It was a little scary at first, but it really transformed the words ‘effective practice’ into a whole new definition for me.”

His real-world experience started with an interview with DiSano, a move to New York City (and into his Axispoint office), and access to the “fastest laptop I have ever used in my life.”

Orzechowski, who is a computer science major, math minor with a concentration in computational science, says he was ready for the challenge because Clark and Axispoint share similar cultures.

“At Clark, my professors are always available for help as my mentors. I felt the same thing at Axispoint with everyone from my team members to President DiSano, who makes me proud to be a Clarkie,” Orzechowski says. “I think he should be a poster child for Clark students. He’s one of the most personable people I’ve ever met, and just look at what he’s achieved professionally.”

Orzechowski says his time at Axispoint has changed his outlook about getting a job in software development from I think I can to I know I can. “My LEEP Project not only gave me relevant job experience in software development,” he says, “but also confidence in my ability to apply everything I have learned and will continue to learn at Clark.”

This story appeared in the spring 2014 issue of CLARK Magazine