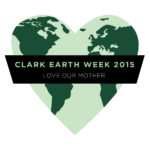 Clark University students spent last week attending lectures and films, and participating in competitions and giveaways as part of a coordinated campus-wide effort to honor and celebrate Mother Earth.

Early in the week, students who ventured near the Academic Commons at Goddard Library were exposed to a “grave situation” — a sea of painted tombstones that spelled out the many ways in which climate change is affecting our world. Student clubs including The Clark Green Athletes and The Local Root organized towel and fruit giveaways, and The Clark Community Thrift Store enabled 30 interested students to swap a piece of their clothing for something “new.”

On Wednesday, March 26, the entire Clark community focused their attention on the Earth, the sky and everything in between as part of an unprecedented day-long Climate Change Teach-In in which faculty, students, and guest lecturers learned about climate change from social, political, scientific and cultural perspectives. Clark alumna and keynote speaker Susanne Moser, Ph.D. ’97 demonstrated her commitment to sustainability and by quenching her thirst using her newly gifted Clark water bottle instead of the Poland Springs bottle near the podium.

Some of the more unconventional ways Clarkies celebrated included a Sacred Fire led by Rachel Shea, head of public services in the Goddard Library; a Celebration of Coffee that included coffee sampling, and get togethers at National Grid’s Sustainability Hub on Main Street and in Red Square at the solar-powered cell phone recharging station. Off-campus activities included trips to the Arboretum and Cook’s Pond, a block party at the Recycling Center on Park Avenue that featured a game of recycling bin soccer, and a field trip to WeCare Organics, a commercial composting facility in Marlboro.

In addition, three of the four First Year and Transfer Halls reduced electricity by 1009 kWh. Residents of Wright Hall won a friendly competition amongst the residence halls and reportedly saved 10.46% more than usual, according to EcoLiaison Nate Lapides ’15.

As part of the effort to Take Back the Tap, approximately 50 students were given a blind taste test to determine which water they preferred, tap water or Fiji/Trader Joe’s brand water. Sixty-five percent of the students surveyed preferred the taste of tap water over the latter; all were encouraged to use the refillable water stations around campus.

“It was an amazing week of celebrating the rich culture of sustainability at Clark,” said Robin Miller MBA/M.S. ’16,graduate assistant for Sustainable Clark.

The Sustainability Hub and other interested student clubs have one other objective on the horizon: making this year’s Spree Day zero waste.