The following statement was sent by President David Angel to Clark faculty, staff and alumni:
By ClarkNews 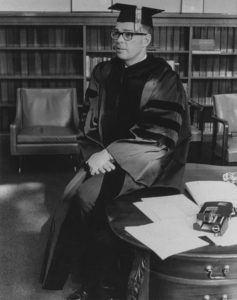 The Clark University community was saddened to learn of the passing of former Clark president Frederick H. Jackson on March 20, 2015, in Beaumont Rehabilitation and Skilled Nursing Center at Westborough [Mass.].

Dr. Jackson presided over Clark during a restless period in the nation’s history, marked by student protests against the war in Vietnam. He helped Clark make history of its own by overseeing the completion of the Goddard Library. The May 19, 1969, ribbon-cutting ceremony drew luminaries like astronaut Buzz Aldrin, just months away from flying to the moon, Sen. Edward Kennedy, and Esther Goddard, widow of the new library’s namesake, rocketry pioneer Robert Goddard.

During his time at Clark, Dr. Jackson took a leadership role in the establishment of the Worcester Consortium for Higher Education, which fostered a collaborative partnership among Worcester’s colleges and universities, and opened up opportunities for students to take courses at any of the city’s institutions of higher learning.

A native of Connecticut, Dr. Jackson earned his bachelor’s degree in English literature from Brown University and his master’s and doctoral degrees in American civilization from the University of Pennsylvania. Prior to his arrival at Clark, he was vice president for humanities and social sciences, assistant executive vice president and professor of history at New York University.He’d previously worked as a grants officer for the Carnegie Corporation of New York.

He enjoyed a distinguished career as director of the Committee on Institutional Cooperation, the consortium of eleven major Midwestern universities composed of the Big Ten and the University of Chicago, where he worked until his retirement in 1984.Among the CIC’s many initiatives was a major effort to increase the number of minority students entering engineering schools and minority doctoral fellowship programs in the social sciences, humanities and science and engineering.

Our thoughts and prayers are with the Jackson family.