Clark University is making great strides toward reducing its environmental footprint by installing composting bins around campus, most recent in the Academic Commons at Goddard Library. This high-traffic campus location was previously equipped with recycling stations for plastic, metal, glass, paper, styrofoam, batteries and cardboard; however, Clark’s sustainability experts knew there was room for improvement. 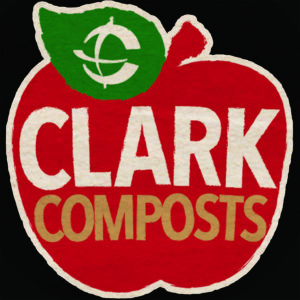 “Composting is the perfect option for leftover food, paper napkins and coffee cups, which were ending up in the garbage,” said Jenny Isler, Clark’s director of sustainability. “Our slogan is ‘If it was ever alive, you can compost it,’ so we wanted to make it work in the Academic Commons where there was a lot of opportunity.”

The University presently diverts approximately 55% of its waste, up from less than 30% a few years ago.

Clark first started composting food waste in the Higgins Cafeteria in 2007, following two years of research spearheaded by a student. In 2011 the effort spread to the Bistro Cafe, which began offering compostable containers and utensils. In the fall of 2013, Clark introduced composting bins to the recycling programs in several residence halls and added composting to four more halls in 2014.

Clark Composts!, a dedicated student group, is the driver behind instituting and implementing composting programs around campus. They receive support and guidance from Sustainable Clark, Clark Eco Reps, the Student Sustainability Fund, Student Leadership and Programming, Physical Plant, the Office of Residential Life, the Clark Sustainability Collaborative and the Clark Recycling Crew.

“The students involved with Clark Composts! and the Recycling Crew make it their mission to get more people at Clark to think about what they throw away and the affect their actions have on our planet and our community,” said Isler.

They have been successful at increasing composting locations on the Clark campus and have made it incredibly convenient and easy for members of the Clark community to participate.”

Changing routines and habits sometimes takes a great deal of time and energy.

“These students are not only changing behavior, they’re changing hearts and minds along the way,” said Isler. “They have demonstrated collaborative leadership in sustainable change.”

Clark Composts! will focus next on instituting composting in the newest residence hall and in the academic departments while increasing awareness among the Clark community. The University is also taking steps to ensure this year’s Spree Day is a “zero waste” event for the first time ever in Clark history.

Clark won the MassRecycles award for three years in a row for its waste diversion success and has been named an EPA Regional Champion in the Food Recovery Challenge for its composting initiatives. Clark students routinely travel to other campuses and high schools to share the success of our sustainability programs and efforts.