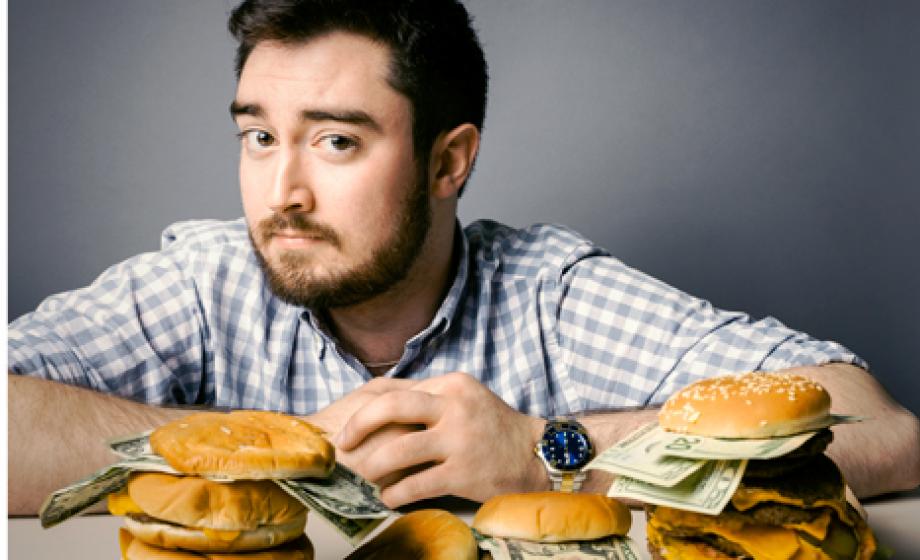 See that hamburger on your plate? Juicy, blanketed with cheese, capped with onion, drenched with ketchup — at this moment, it probably looks like the most perfect thing in the world. How much do you think that hamburger cost? No, not the price you paid for it, but the cost to the environment to produce it and the health costs associated with eating it.

This past year, David Prentice ’14 took on a LEEP project that required him to accomplish the near impossible task of assigning hard figures to the impact of the all-American hamburger on the nation’s populace.

He had a worthy ally in his quest: New York Times food writer Mark Bittman ’71, who authored a July 15 Times column based on Prentice’s research titled, appropriately, “The True Cost of a Burger.” In the column, Bittman acknowledges that the studies to accurately quantify the actual costs “are so daunting that they haven’t been performed.” But he and Prentice take their shot, working to connect the dots by tapping into experts’ analyses and extrapolating from existing information. They speculate that Americans’ habit of consuming roughly 16 billion hamburgers a year may cost about 53 cents per burger in carbon emissions, derived largely from the “carbon footprint” of raising cattle, and 48 cents in costs connected to obesity and its health-related risks. (They note that some researchers suggest their estimates may be conservative.)

Prentice, a Cape Elizabeth, Maine, native, said he was intrigued from the moment he read the project proposal.

“I like the idea of peering behind the veil and studying interconnectivity, looking at our everyday habits and how they impact the wider world,” he says. Prentice largely worked independently with guidance from Bittman and regular check-ins with mentor Jody Emel, professor of geography, to explore the “cascading effects” of hamburger consumption — establishing linkages between the menu item and human health and ecosystems.

Researching these “externalities” — the costs of a product not borne by the producers — was like nailing ground beef to a wall. Prentice pored through thousands of pages of research, and talked with nationally known authors and scientists, often finding himself on the phone with them between classes.

“I took everything as far as I could go, finding the right research, calling the right experts, learning the science, assessing the impact, and then developing a method, basically from scratch, on how to monetize the costs,” he says. “There’s really no standard model for this kind of study, which makes it tough to know whether you’re on the right track, whether your analysis makes sense and holds up. And often new facts would emerge that would force me to develop a completely new model. That was extremely challenging, and scary, at times, but the demand to continuously create new solutions was exciting.”

Prentice kept at it, delivering rounds of reworked drafts that returned with questions from Bittman, graphics editor Bill Marsh and NYT fact checkers before a polished final version could be printed. On the day it was published, the article rose to the fourth most viewed and fourth most emailed story on the Times website. The piece elicited reaction from all over the world, including scores of tweets and blog posts from prominent policy organizations, journalists, thought leaders, researchers and universities, and, notably, Virgin CEO Sir Richard Branson.

“It was very validating,” Prentice says. “When Richard Branson is blogging about the research you were just working on, invisibly, in Goddard Library or your obscure Brooklyn apartment, that’s surreal.”

Not all the reaction was positive. Forbes magazine responded with two pieces attacking the findings and methodology. Prentice says he’s not surprised with Forbes’ reaction to the column because the NYT piece refutes the notion that growth always creates value and wealth for society. “We demonstrated another instance in which the growth of certain industries could be destroying as much, and maybe more, of the value they supposedly create.”

Prentice now works in marketing in New York, but is interested in pursuing a journalism career. He’s off to a solid start: he and Bittman will be teaming up on future projects. And what of Prentice’s personal feelings about hamburgers? He confesses to loving them as a child. These days? “Not really a huge fan.”