Clark U. Model U.N. Team ranked #23 in the country for performance this fall 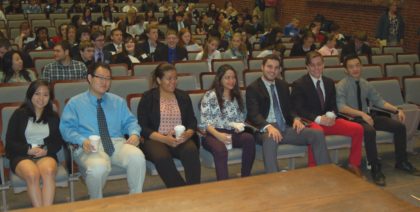 The Clark MUN team hosted its 5th annual High School Model UN Conference on campus on Oct. 25. It was the largest one ever hosted by Clark; over 150 New England students participated. Katerina Antoniou ’10 served as the conference’s keynote speaker. Antoniou was the former head delegate of the Clark Model UN Program and received her B.A. in political science and economics at Clark and her M.S.C. in politics and economics at the London School of Economics. Brenna Dougherty ’15 (Political Science) served as the Secretary-General.

“As always, our team did a wonderful job this year,” said Clark University Srini Sitaraman, associate professor of political science, who serves as faculty adviser to Clark’s Model U.N.

“The team was particularly thrilled with the entry of several first-year students into the program,” he said. Sitaraman anticipates that many will emerge to play an active role in the program in the coming years.

The MUN team has a busy calendar for the spring semester. Clark will host the Middle School Model UN Conference in March with the cooperation of the UN-Association of Greater Boston (UNAGB). The team is also preparing for their last three conferences: McGill University Model UN Conference (McMUN) in late January 2015, Harvard University (HNMUN) in February and Brown University (BUSUN) in March.