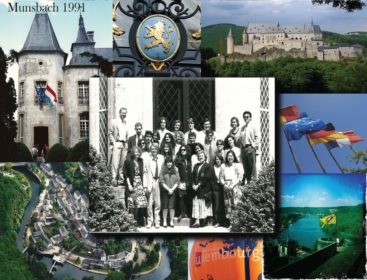 Uwe Gertz expected perhaps 80 to 100 attendees at the reunion of the Henry J. Leir Luxembourg Program-Clark University (LLP-CU) on Nov. 1. But the turnout exceeded all expectations, necessitating a change of venue from Dana Commons to the Higgins University Center to accommodate more than 160 people — one of them traveling from London — for an evening of celebration and reminiscences. The event included a reception and a dinner in Tilton Hall, a panel discussion, and an address by The Honorable Jean-Paul Senninger, the secretary general of Luxembourg’s Council of Ministries and the former ambassador to the United States.

“The event gave everyone an opportunity to share their experiences and to network,” says Uwe Gertz, the Leir Program’s longtime coordinator. “It worked out very well.” Also attending were two students from Luxembourg, who are now Clark undergraduates in large part due to the program’s outreach to their former high school.

Reunion attendees flooded Uwe Gertz’s inbox with notes of thanks, and even many who couldn’t make the event reached out to relate their memories and express appreciation for their rewarding time in Luxembourg. Among them was an alumna now working for the State Department in Jordan, and another who couldn’t attend because she was doing diplomacy work in Austria.

Henry J. Leir was a German industrialist who held an abiding affection for The Grand Duchy of Luxembourg, which harbored his family soon after the Nazis gained absolute political power in Germany in 1933. Funded through the Leir Charitable Foundations, the program comprises an impressive array of active learning opportunities, international conferences, internships and scholarships that have benefited hundreds of Clark University students and faculty over the years. The LLP-CU provides these opportunities to honor Mr. Leir and his wife, Erna.

At the high school level, prizes for Luxembourgish 10th grade student essays are presented annually; small scholarships are awarded to Luxembourgish students who study at Clark; and speakers as well as visits promoting the discipline of education are supported both to Clark and in the Grand Duchy. For college-level students, the May Term provides Clark and Holy Cross undergraduates with almost four weeks of study in Luxembourg, allowing them to learn from Clark and Holy Cross faculty and contextualize what they learn through field trips in Luxembourg, Germany, France, Belgium, and Holland. In addition, the LLP-CU internships provide Clark students with two months experience during summers in various fields, including environmental science, and for Clark Ph.D. candidates, the LLP-CU has a yearlong internship. To deepen knowledge of Luxembourg, the program also occasionally invites Henry J. Leir Speakers, prominent Luxembourgers, to campus. Clark faculty also can convene meetings in Luxembourg on a wide spectrum of topics.

The Nov. 1 panel gave four former participants a chance to recount their overseas experience and detail how it helped them shape their professional paths. Panelists were Ladia Wintr Ph.D. ’06, an LLP-CU intern at the Central Bank of Luxembourg in 2004-2005 and now an economist at the bank; Angie Woodmansee ’10, a LLP-CU conference awardee in 2010 and a Fulbright Scholar to Luxembourg in 2010-2011, now an instructor in English at Yaşar University, Turkey; Kyle Brunel ’93, a May Term student in 1990, who today is project manager and senior project designer with DGA, a planning, architecture and design firm in San Francisco; and Bryan Tamburro ’97, a May Term student in 1995, who is vice president for global project execution at International Electric Power.

“What resonated with me was the quality of experiences, which were so multivariant and multicultural yet cohesive,” said Brunel. She pointed to her career in design, which relies on “seeing the potential and the possibility of things that weren’t there before that will be there in the future, and being the conduit that enables that organizing system to actually be created. I think a foundation of seeing how that is possible started with my time in Europe.”

Bryan Tamburro talked about handling 9th century gospel texts in Luxembourg’s Bibliothèque nationale and of traveling by himself to Berlin.

“That was such a profound experience because one of the things I was trying to explore in my time at Clark was why do we think the way we do today,” he said. Tamburro spoke of the “awakening” the Luxembourg program gave him, helping him fashion a career that has allowed him to do business in almost fifty countries and “continue to explore and engage with those we may not understand, and drive conversations with those we may have conflict with.”

In his post-dinner remarks, The Honorable Jean-Paul Senninger stressed the importance of exposing oneself to international cultures when forging a life and career. “Let’s face it, globalization is here to stay, and everyone who wants to work in our interconnected global world should spend time studying abroad,” Senninger said. “An international experience teaches us to appreciate difference and diversity firsthand, enables us to recognize and then dismiss, or sometimes confirm stereotypes, about people we’ve never met or places we’ve never visited.”

Acquiring international experience should be an integrated part of students’ educational toolkit, he said, allowing them to “understand and internalize what they learn and do.”