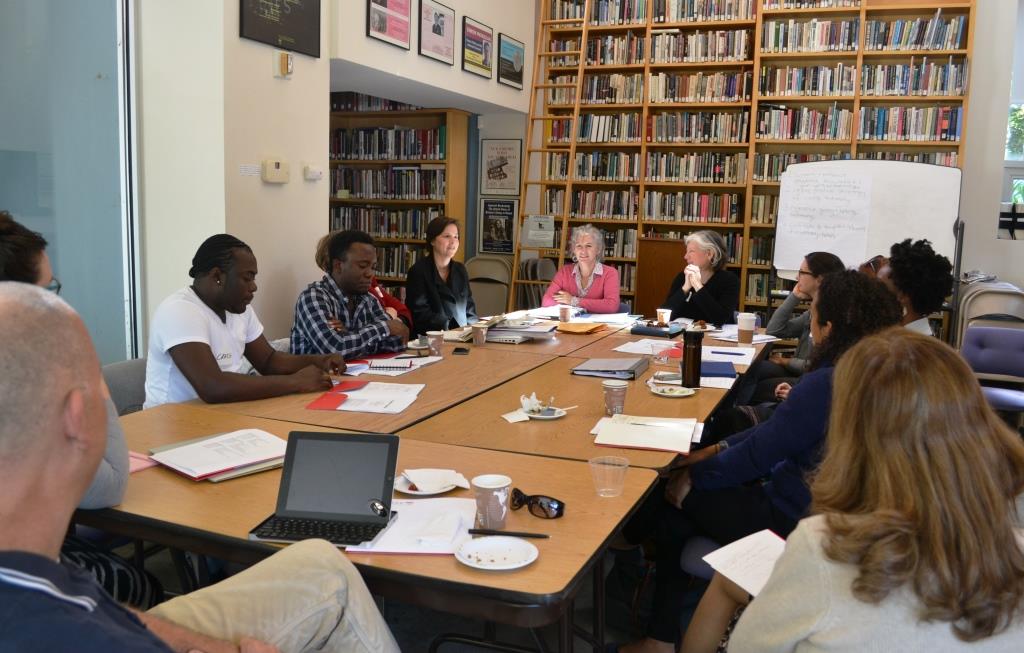 “Not since the end of the Second World War have there been so many refugees, displaced people and asylum seekers,” said Ban Ki-moon in his speech at the recent opening the 69th UN General Assembly.

At a three-day workshop at Clark University, participants explored ways of drawing out, preserving and sharing refugee narratives. The International Development, Community and Environment Department offered “Witnessing: Taking testimonies and constructing refugee narratives” (Sept. 19-21), where practitioners, researchers, and students in the field of refugees, displacement, and forced migration explored methods and ethics of testimony-taking and examined the uses and importance of refugee testimonies.

Gathering migration stories and sharing refugees’ backgrounds and experiences are crucial aspects of securing legal and political access and protections as well as aiding in resettlement for these growing populations, stresses Anita Häusermann Fábos, associate professor of International Development and Social Change. “We need a clearer awareness for the ways people move and how societies make room for newcomers.”

Fábos, whose Clark courses include Cultures in Exile and Displacement and Development in the Contemporary World, attended the International Association for the Study of Forced Migration in Colombia in July. She coordinated and facilitated the September workshop at Clark, which was taught by Leora Kahn, executive director of PROOF: Media for Social Justice, an award-winning organization that “brings together photographers, documentarians, academics and activists to create visual documentary projects that become sustainable educational tools in regions riven by recent armed conflict and atrocities.”

“Stories told by and for refugees are a powerful tool for raising awareness about their situations and addressing their unique concerns. We see a real desire among professionals, researchers, and others who work with refugees for tools to convey those stories in an effective but ethical way. We hope to present more workshops like this one in the near future.” ~ Professor Fábos

Testimonies have different purposes, Fábos notes. They can be used for refugee status determination, in journalistic accounts, for testimony in an international court, for policy research and academic articles, to teach, or to preserve history. Testimonies have also helped stimulate and shape social change, and can be an effective tool for policy change and social transformation.

The hands-on workshop at Clark introduced methods and ethics of testimony-taking and examined the uses and importance of refugee narratives. Participants explored ethical questions in taking testimonies to illuminate human rights issues.

Topics and examples included oral history projects with refugees from Bhutan, testimony from LGBT asylum seekers in the United States, and visual narratives from Dadaab Camp in Kenya, among others.

The workshop, held at the Rose Library at the Strassler Center for Holocaust and Genocide Studies, included a field trip to an oral history exhibit based on refugee testimony, and coincided with the opening of the exhibit, “Picturing Moral Courage: The Rescuers,” which was on display at Clark’s LEEP Center until this month.

Graduate student Danielle Strandson, who received a B.A in International Development and Social Change & Studio Art in 2014, served as the workshop administrator. Strandson is in the 5th-year, accelerated master’s degree program at Clark, working toward a master’s in Community Development and Planning. She volunteers as an ESL Teacher at Worcester Refugee Assistance Project.  As an undergraduate, Strandson co-founded the Clark Student Action for Refugees organization.

Fábos served as director of the Forced Migration and Refugee Studies program at the American University in Cairo, and later Programme Coordinator for the graduate program in Refugee Studies at the University of East London. She has been involved in developing teaching, research, and outreach programs that incorporate refugee and forced migrant perspectives into collaborative work with scholars, practitioners, refugee organizations, policy makers, and international organizations.

At Clark, students in her classes have carried out community-based projects that have investigated refugee participation in community development initiatives, refugee access to higher education, and refugee livelihoods in the city of Worcester.