The fact that fewer than fifteen percent of eligible voters showed up for the 2014 primary elections indicates that primary elections do not matter to very many citizens. However, Clark University associate professor of Political Science Robert Boatright contends that congressional primary elections matter — a lot. He explains their importance, and dispels claims and myths about them in his new book, “Congressional Primary Elections” (Routledge 2014), the first comprehensive text devoted to the topic in nearly a century.

In his text, Professor Boatright addresses claims made about congressional primary elections (that they are increasingly being blamed for polarization and gridlock in Congress, and lead to the election of ideologically extreme candidates) and explains why primaries play a large part in the way we talk about national politics. He also outlines the variables that shape congressional primaries’ results: the presence of an incumbent, the number of candidates in a race, partisanship of a district, rules and state variations of rules, and monetary support for campaigns.

Primaries, Boatright argues, are a distinctive feature of American democracy.

“There is much to celebrate in the openness and democracy that characterize American primaries,” he said. “Primaries are appealing in that there are examples of dramatic victories, unexpected reversals for veteran politicians, and charismatic new faces.”

According to Professor Boatright, this is an appeal that has been noticed by politicians in many other countries — one that has led many nations to move toward greater public participation in primaries.

“Whether it is an appeal that has served Americans well is a story worthy of careful exploration,” he said. 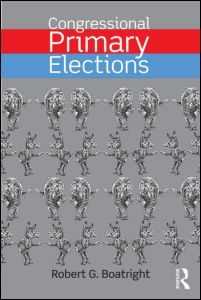 The author’s goal in writing the book was to collect as much information about congressional primaries into one source as possible, thereby creating a resource that would be suitable for students, researchers, journalists and the general public. Steven Schier, professor of political science at Carleton College, calls Boatright’s book “essential reading for all students of American elections” and says it “should find a welcome place in undergraduate courses in political parties, elections, and American political behavior.”

Professor Boatright’s books include “Getting Primaried: The Changing Politics of Congressional Primary Challenges” (February 2014) and “Interest Groups and Campaign Finance Reform in the United States and Canada” (March 2011). He is currently working on a study of interest group expenditures in the 2014 congressional primaries and is completing an edited volume comparing recent changes in campaign finance laws in Western democracies. Professor Boatright is the director of the Worcester Campaign Finance Project. He has been on the Clark faculty since 2005.

“An Election Day romp: How did it happen and what does it mean?” from Worcester Magazine, November 6, 2014.