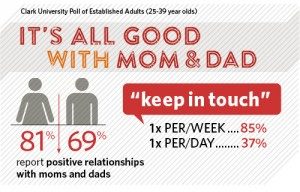 You know those holiday-dinner movie scenes, where aging parents and their grown children serve up bitter resentments or long-held hostilities? Good drama, maybe, but merely an escape from reality for most adults, thankfully. A new poll finds that, as the so-called millennials move into their 30s, most are enjoying strong, positive relationships with their parents, while working and raising families of their own.

For more information and a full report of the new Clark University Poll of Established Adults, please visit www.clarku.edu/clarkpoll. To download an infographic, click here.

Among many topics, the Clark University Poll of Established Adults asked respondents in this age group to rate their relationship with their parents. Most reported highly positive or somewhat positive relationships with mothers (81 percent) and dads (69 percent).

The lines of communication with parents remained wide open for the 25- to 39-year-olds: 85 percent keeping in touch with parents via text, email, phone, or in person at least once a week, 37 percent communicating every day. 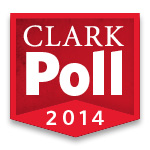 “Even after they no longer rely on their parents for financial support, parents remain among the most important people in the emotional lives of established adults,” said Clark University Research Professor of Psychology and Poll Director Jeffrey Jensen Arnett, Ph.D., who coined the term “emerging adulthood”— the phase of the life between adolescence and full-fledged adulthood. “In fact, in many ways their relationships with their parents improve, now that they can enjoy time together as adults and near-equals.”

As they keep in close touch with Mom and Dad, they are not languishing in their parents’ basements. At ages 25 to 39, only 14 percent live with their parents and, on average, they report that they moved out at age 21. When asked about financial support from parents, 65 percent reported getting “little or none.” Seventy-seven percent ranked “relationship with my parents” as a source of enjoyment. Just 21 percent said their parents are “more involved in my life than I really want them to be.”

The Clark University Poll of Established Adults is based on 1000 interviews with adults 25-39 years old nationwide. The margin of error is +/- 3.06 percent. A mixed-mode methodology was used for this project.