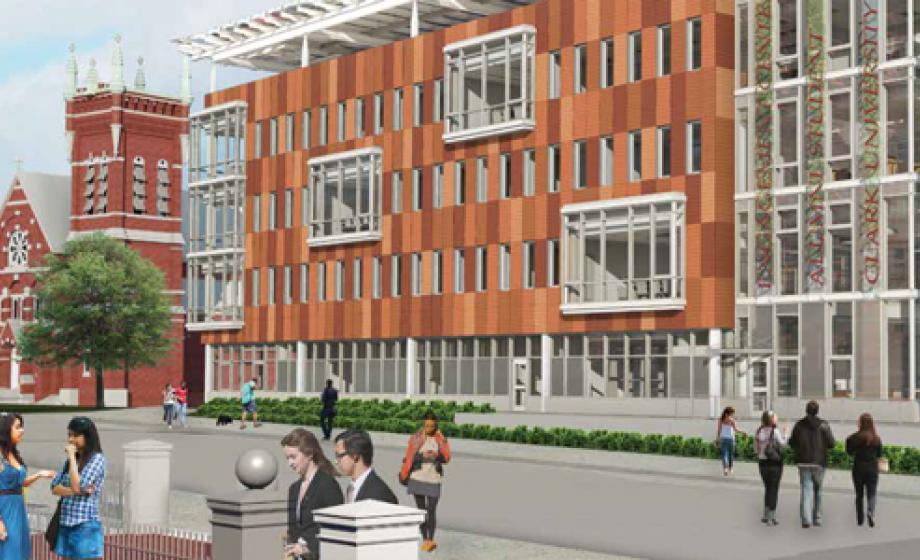 In terms of distance, the width of Main Street is nothing special. A person can cross the road in about ten steps; the journey is accomplished in seconds. But the trip from the front gate of Clark University to the planned Alumni and Student Engagement Center on the opposite side of Main Street carries with it a significance that extends well beyond physical measurement.

This signature structure will house the core of the University’s pioneering LEEP [Liberal Education and Effective Practice] learning model, heralding Clark’s leadership in the higher education arena. It will provide necessary physical spaces for alumni to connect with one another, and to re-engage with their alma mater in ways that will incorporate their passions, deploy their expertise, and drive change. 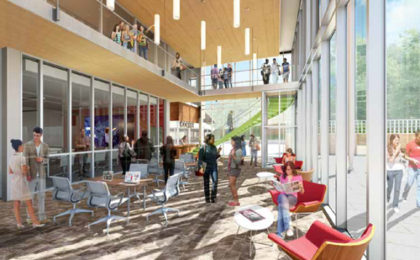 The building also will anchor revitalization efforts in the Main South neighborhood, strengthening the partnership between Clark and the city and helping fashion a gateway that will have visitors regarding Worcester with fresh eyes. With its intrepid design, the Alumni and Student Engagement Center declares itself a 21st-century space that will inspire creativity, nourish forward-thinking and spur collective action — all within view of venerable Jonas Clark Hall.

Work is expected to begin next year on the four-story, 35,000-square-foot facility, which is the cornerstone of an ambitious project encompassing University-owned land from Grand Street to Gates Street. The University has already received generous support from local foundations, alumni and friends who recognize the transformative potential of the project.

The building is the culmination of a vision that is traced to the earliest discussions about LEEP, Clark’s model for liberal undergraduate education that integrates academic excellence with authentic world and workplace experiences. Clark’s role in advancing liberal education means the building will be a locus for mission-driven work that attracts the participation of a diverse population — faculty, alumni, students, business, community and government leaders, and experts in a wide range of fields.

Raising the structure that will host this collaborative movement — where ideas will fly and solutions will be proposed — has resulted in something of a fortunate paradox: Clark is building walls to tear down walls.

The Alumni and Student Engagement Center is bred from the University’s ongoing desire to produce bold thinkers, inventive leaders and confident risk-takers.

Critical to the mission is the LEEP Center, which will migrate from its current home in Dana Commons into the first and second floors of the new building. The move will dramatically increase programming and administrative space and give LEEP a concentrated, centralized presence on campus. Within this building, generations of students will shape an integrated learning trajectory that transforms them from engaged, thoughtful learners to connected, effective professionals and committed citizens.

At the heart of LEEP are communities of effective practice that bring together people of various backgrounds and capabilities to forge solutions to some of society’s most pressing problems — a process that demands an array of perspectives. Clark students particularly flourish from their partnership with alumni and other stakeholders, who provide mentorship and help them understand the skills and capacities needed to devise strategies that align with their own emerging life and career goals.

“The extent to which the space can foster relationships and connections makes it important,” says Mary-Ellen Boyle, associate provost and dean of the college. “There will be an opportunity for alumni to mix with students, reinforcing the idea that the entire campus is committed to this approach to liberal education. LEEP is not just about the classes, it’s about the entire Clark experience, and a lot of people are going to influence student learning.

“We redesigned our co-curricular programming to be much more intentional, so students can grow into these effective-practice experiences that will help them launch post-Clark. The fact that we have an academic building that’s not dedicated to a specific department is symbolic of how our campus is changing and connecting us to the broader world.” 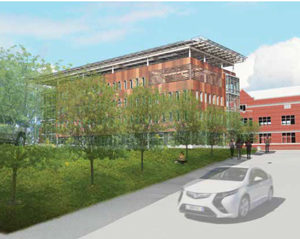 Today’s Clark students walk in the footsteps of some of most influential and original thinkers in modern times. Since its founding in 1887, the University has produced alumni who boast notable individual achievements, yet who also changed the game for everyone by fashioning new approaches in science, business, literature and the arts. As Philadelphia Eagles owner Jeffrey Lurie ’73 told a 2013 reunion audience, “At Clark, it wasn’t just a professor determining what the paradigms of the moment were. I didn’t want to hear the paradigms as they existed; a lot of us wanted to hear the paradigms of what could be. That notion infused me with energy to go after things that others would say were conventionally unrealistic.”

The Alumni and Student Engagement Center recognizes Clark’s lifelong partnership with its graduates by mobilizing alumni to claim their Clark legacy.

Former trustee and Alumni Association president Larry Hershoff ’71 says he’s been advocating for a dedicated alumni space for well over a decade. Alumni will be crucial contributors to the long-term success of LEEP, he says, reinforcing the importance of uniting students and alumni in common areas.

“The alumni conference room and office space is a signal from the administration that it recognizes the critical importance of alumni to LEEP and to Clark as a whole,” Hershoff says. “An alumni center gives us a place to meet, to celebrate alumni achievements, and to deliver the message that Clark is very proud of its alumni and wants them to come back whenever they can.”

Through the center, Clark alumni will be encouraged to participate in the transformation of liberal education as it becomes more attuned to the profound changes that are underway in our economy and society. Alumni will share their expertise and experience, and provide internships, mentorship and job opportunities to help enable students’ transitions from college to career. Clark alumni also will have the opportunity to come together with faculty and students, alumni colleagues and others, around causes that matter to them — channeling their passions into action. They will conduct research that is consequential and personally meaningful, launch initiatives that address a social ill, or perhaps introduce a new business model. They will forge their own dynamic partnerships with Clark.

The center will host panel discussions, lectures and other events that foster vigorous intellectual give-and-take and reframe questions critical to interpreting and reimagining our world. The aim is no less than to ignite change from the grassroots level to a global scale in areas ranging from K-12 education to the environment and beyond. 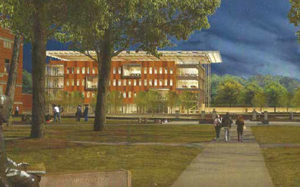 This vision for an empowered Clark network is tied to the very practical consideration of including an alumni conference room and a lounge in the new building that offers Clarkies long-desired communal space. Trustee Elyse Darefsky ’79 notes, “We’re all looking forward to the day when we can say, ‘I’ll meet you in the alumni center.'”

As Clark University positions itself for the future, it does so as an ally with the City of Worcester. Clark’s investment in the Main South neighborhood through the University Park Partnership has paid dividends on numerous fronts, from the ongoing improvements in the Kilby-Gardner neighborhood to the nationally acclaimed success of the University Park Campus School. Clark faculty and students have long worked in tandem with the community to address the issues prevalent in densely populated, low-income urban areas. The latest example of this compact is the University’s formation of an Academic Health Department to battle health problems besetting the city’s most vulnerable populations.

Jack Foley, vice president for government and community affairs, sees the Alumni and Student Engagement Center as the next step in this valued partnership with Worcester, with clear benefits on the horizon. The building will be situated on property Clark is purchasing from the Diocese of Worcester. Its glass wall on the west side will look out onto a landscaped greenway that was formerly occupied by Monahan Medical Supply and Iglesia de Dios, and beyond to University Park, where Foley envisions a natural amphitheater that will play host to student-performed concerts and other events. 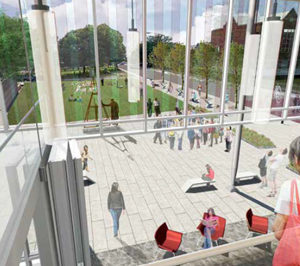 The construction coincides with $1.5 million in improvements to University Park, partly funded by Clark’s payment-in-lieu-of- taxes (PILOT) agreement with the city. The park project has been ongoing, and will be complemented by $2 million in federally funded streetscaping along Main Street, from about Hawthorne to Beaver Street, which will feature enhanced lighting, widened sidewalks, bike racks, plantings, benches, and reconfigured crosswalks. Foley likens the reimagined swath of Main Street to the recently revitalized Canal District off Kelley Square.

He describes the attractive, well-lit building as a “beacon” along an unremarkable stretch of Main Street that too many regard as a runway between destinations, rather than as a gateway into Worcester that deserves appreciation and attention. With Worcester’s downtown in the process of being renewed and reconstructed, it’s essential that Main Street’s profile also be elevated, he says.

“For many years now the Board of Trustees has been talking about the importance of a gateway that would highlight the University’s presence and our neighborhood,” Foley says. “This is a wonderful opportunity to enhance the area and highlight Clark at the same time.”

Aesthetically, the Alumni and Student Engagement Center’s appearance will be a prominent departure from the former mills and the triple-deckers that populate the neighborhood, and it speaks to Clark’s aspirations as a change-maker. The building features an open design bookended by glass walls and a multistory atrium that promises to be a hive of activity both for Clarkies and the wider community. In keeping with best green practices, solar panels will line the roof to bring the center as close as possible to net zero energy use.

Clark Trustee Richard Freeland, commissioner for the Massachusetts Department of Higher Education and former president of Northeastern University, and other board members asked the architect, Architerra Inc., of Boston, to produce a design that reflects the boldness of the University’s LEEP initiative and tells the story of Clark’s bracing approach to education in the 21st century. As an offshoot, he says, a modern building will contribute to a more positive perception of the neighborhood.

“I was a strong proponent of the value of crossing Main Street and putting a footprint there,” Freeland says. “If Clark wants to tell the world that this is a new era, and we stand for something new and exciting, then we need to make an iconic statement on Main Street.

“I learned from my experience at Northeastern how important physical construction is, but also visible construction that the world can see. You don’t want to bury a building deep on campus where it won’t have much of an impact.

“This will have impact.”