A troupe of Clarkies is turning the Boston theater scene on its head
By Melissa Lynch ’95, MSPC ’15 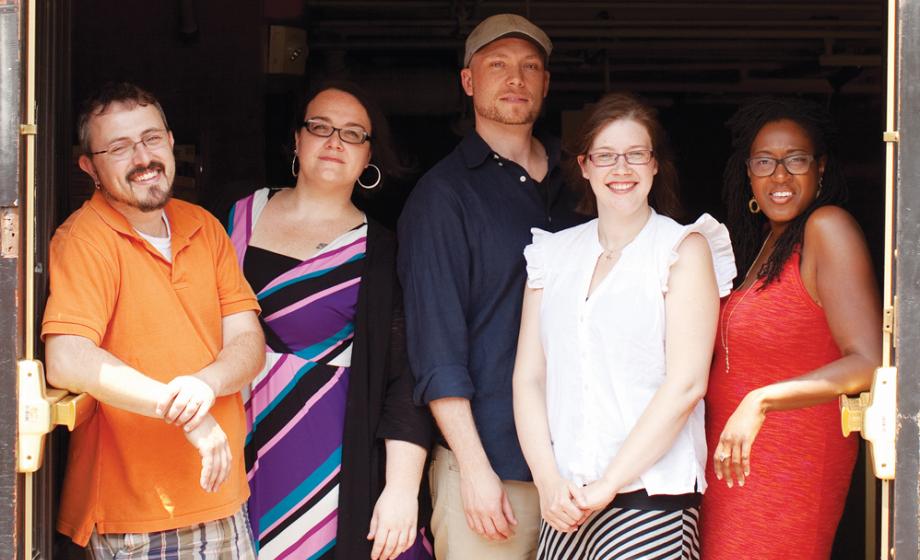 Students in Charge of the Clark University Players Society want to put on the play “Picasso at the Lapin Agile.” The plot twist: rights to produce the play are not available.

The Clarkies ask the powers-that-be in the Visual and Performing Arts Department for permission to stage the show, but their request is denied.

They do it anyway.

Flash ahead through many acts and countless scenes to the Boston Center for the Arts, 2014.

These same students, now alumni, are putting on “Astro Boy and the God of Comics.” The play is the closing production in the fifteenth season of Company One Theatre, founded by the group of Clark friends to expose audiences to works that are raw and risky, sometimes approaching dangerous.

They are making an impression. The American Theatre Wing, the body that gives out the Tony Awards every year, has named Company One as one of the ten “most inspiring and innovative theatre companies on our national landscape.” Company One is leading the theater community to the creative precipice, and daring it to jump.

During their time at Clark, they bonded over their desire to produce memorable theater. In 1998, several members of the group convened on Great Diamond Island off the coast of Portland, Maine, and worked together to create “The Island Project,” which involved a tour of David Ives’ “All in the Timing” in Portland, New Haven, and Boston.

“The idea of forming an actual theater company was always brewing,” says Williams. “Once ‘The Island Project’ was a successful venture, it became more of a reality.”

The Island Project, formed by LaCount, Mark Abby VanDerzee, Shampnois, Sand, Ossen, and Imbrascio, became Company One Theatre a year later, at which time Ossen and Imbrascio moved on to other opportunities and Williams and Sasha Abby VanDerzee (now Mark’s wife) joined the venture.

They decided to settle in Boston, where LaCount, a native, was determined to shake up the city’s theater scene. More than fifty plays later, all six founders remain heavily involved in the company — directing, working in administrative roles or sitting on the board of directors.

This all-hands-on-deck attitude fits with the company’s name and mission. The singularity of purpose “came from putting our heads together,” says Mark Abby VanDerzee, Company One’s educational and technical director. “Our collective motivation drove it, and continues to drive it.” LaCount now serves as Company One’s artistic director. “When we started out, all of us did everything,” he says. “Everybody was part of every decision. Basically, we chose a different leader for each discussion, and we called those things ‘departments.’ If you looked at us on paper, we had all these departments, but it was the same five or six people in different formations doing everything.”

LaCount’s job is to plan each season, though a programming committee discusses the possibilities. “At the end of the day it’s my responsibility to put the thing together and decide what we’re doing every season, but we have pretty open dialogue about it,” he explains.

And though it’s been a while, each of the founders, with the exception of Sasha Abby VanDerzee, former director of development and a current board member, has trod the boards in a Company One production (Sand has earned Boston theater award nods for his acting work). LaCount, Mark Abby VanDerzee and Williams are frequent directors. Even Clark faculty have joined the effort: theater arts Professor Ray Munro directed and had other involvement with the first Company One productions, and Professor Neil Schroeder acted in two plays in early seasons.

Munro, LaCount says, was a huge influence. “He taught me the difference between being an artist and a performer,” he says. “We were out on the steps of Atwood Hall, and I was asking him for advice on my career. He said, ‘So you’re an artist … what’s your point of view?’ That’s when I realized the difference. Creating a point of view is paramount to creating a mission, and creating a mission is the thing that separates us from most performing arts organizations in town.”

The Company One Theatre mission is “to change the face of Boston theatre by uniting the city’s diverse communities through innovative, socially provocative performance and developing civically engaged artists.”

To that end, beyond producing thought-provoking work, Company One operates programs in six Boston public schools. Its “Stage One: In School” program teaches theater as a process, working on writing and performance skills. Company One also holds professional workshops for Boston-area actors, and employs teen production apprentices placed with them by the Boston Department of Youth Employment and Engagement. (The city pays the apprentices’ wages.)

“That’s a jobs-training program,” Williams says. The apprentices don’t just have a theater camp experience; they learn about financial planning and collaborating with others, including board members. “The emphasis is on what it takes to run a production company, not just what is on stage.”

DiIorio taught and worked closely with LaCount, Williams, Mark Abby VanDerzee and Sand. “You could tell they didn’t just want to do theater; they wanted to make something. I’m not surprised that they managed to stick it out and build the company.”Gino DiIorio, playwright and Clark professor of theater arts, says that’s exactly what he would have expected. Company One artists “just build it — they don’t wait for it to happen. “Educating the next generation of theatermakers started at Clark. LaCount and Williams completed their student-teaching practicums at the University Park Campus School, and LaCount launched a theater program for UPCS’s newly established high school.

Each season, DiIorio brings his theater students on a field trip to see a professional production, and that sometimes involves attending Company One shows. “The production values are great, the acting is always very, very good; I always enjoy going there. And that’s not always the case — theater is not always good,” he says. “They’re a true success story, and I’m really proud of them.”

Success comes at a price — if not a paycheck . Of the company’s administrators, only Shampnois, as managing director, earns a (very modest) salary. LaCount will begin to be paid as artistic director with the 2014-2015 season.

When the company was founded, “Being idealistic 22-year-olds, we were more excited about the work and getting that done than we were about paying the administrators,” Shampnois says. “Priority-wise, paying ourselves never really came to the top.” Anyone who works on a play or on one of the education programs is paid, she notes.

Fifteen years later, “Everyone understands that we can’t sustain ourselves forever like that. Small steps have been made.” To that end, Company One is slowly transitioning to a different business model with paid administrative staff. “It will take a few years,” Shampnois acknowledges.

Lack of pay means that the Clarkie founders aren’t living by theater alone. In their other lives, Shampnois is a nanny; Williams, Sand, and both VanDerzees are teachers; and LaCount runs a bed and breakfast with his wife.

What the Company One Theatre team lacks in salary it has earned in critical acclaim. WGBH Arts Editor Jared Bowen described “Astro Boy” as “something I have never seen done before so engagingly and so well.” Company One, he added, is “pushing theater in different ways… They really have a sense of where to take theater in this moment: to stretch it, to make it new, to reach different audiences.”

Most recently, the group won three Norton Awards, including outstanding production by a small theater, for “The Flick,” which won the Pulitzer Prize for drama in 2014.The Improper Bostonian named Company One Boston’s Best Theater Company in its 2013 “Boston’s Best” issue, and the group has received recognition from the Elliot Norton Awards, which honor the best that Boston theater has to offer. Since its inception, Company One has taken home 15 Norton awards in varying categories. LaCount and Williams each have outstanding director awards to their credit.

The Company One Theatre production was only the third time “The Flick” was staged, and was its regional premiere. “Almost everything we do falls under the ‘new work’ category,” LaCount says. “I would say that 95 percent of our work is somewhere within the first three productions of the play.”

“They’re not necessarily world premieres, but still new productions,” Mark Abby VanDerzee says. “We like to work with playwrights to try and continue to develop their work, even after they’ve been premiered. Playwrights are often learning things about their own plays over the course of the first one or two productions.”

“The Flick” had its world premiere at Playwrights Horizons in New York, but the Company One production boasted a special connection. Set in an empty Worcester movie house, the play features three characters, one of them a Clark University student.

Some New York critics maligned the play for its three-hour length and long stretches of silence, but local reviews were positive. The Boston Globe said that LaCount, who directed, “demonstrates a sure touch with the rhythms of Baker’s dialogue, which is remarkably expressive beneath its disjointed surface. … LaCount captures the other dimensions of this beguiling play, too: the emotional arc half-hidden within Baker’s seeming shapelessness; the loneliness that is always there, crowding in on Baker’s characters from the edges; the way ‘The Flick’ slides from funny to wrenching and back again.”

In a testimonial on the company’s website, Baker — whose “The Aliens” was on the Company One stage in the 2010-11 season — said, “Company One is one of the most intellectually and theatrically adventurous theater companies with whom I’ve worked. They treat artists with great respect and care deeply about reaching diverse audiences. They’re in the business of making theater for all the right reasons.”

“Challenge convention, change our world,” Mark Abby Vanderzee says. “We were like, ‘They took our tagline!’ We were talking about rebranding at the same time, and looking at our tagline and mission. We are definitely a product of that system.”

Shampnois, the company’s managing director, praises the way Clark gave student organizations the freedom to operate creatively and independently. “It was, ‘Figure out what you want to do, then do it.'”

Which brings us back to 1998 and the forbidden play.

Instead of performing “Picasso at the Lapin Agile” on campus, the group renovated an old barn behind LaCount’s Clifton Street apartment and staged it there.

“We weren’t making any money from twenty people sitting in a freezing cold barn,” Mark Abby VanDerzee explains. In fact, they didn’t charge admission. It was truly theater for theater’s sake.

At the same time, VanDerzee was directing the official Clark University Players Society production — two short plays, by Steve Martin and David Mamet — while rehearsing “Picasso” with the same CUPS cast on alternating nights. The group that would become Company One Theatre had its first taste of challenging theatrical convention.

“Looking back, I probably should have taken a harder line,” DiIorio says of the unauthorized production. “But at the time I thought it was so cool and hip. The funny thing was the way they did it — they set up a bunch of space heaters in the middle of the winter. I thought, ‘These kids have got guts.’ It tells you a great deal about their perseverance, and their willingness to bust through a couple of walls to get it done.”

And it doesn’t look like their perseverance is waning.

“We’re constantly wanting to push, and explore, and challenge ourselves,” says Mark Abby VanDerzee. “And we are very critical of our own work.”

LaCount concurs. “We’ve never been satisfied. In many ways, we feel very lucky to be doing the work, but we still have a lot to do.”