A badge and a bandage

The camera crew from the CNN documentary series “Chicagoland” follows Dr. Andrew Dennis ’92 into the Trauma Unit at Cook County Hospital, where he puts his hands into the open abdomen of 24-year-old Jerimiah Milsap and works feverishly to pull him from the brink.

Moments earlier, Jerimiah had been gunned down while sitting on his front porch and was rushed to this trauma center, one of the busiest in the United States.

Dennis and his team have mastered the art of moving calmly, rhythmically, yet with controlled urgency. Young bodies pierced by bullets are frequent visitors to their operating room, and the doctors, nurses and techs have become expert practitioners in the bloody ritual of saving lives.

Their efforts allow Jerimiah to hang on for a time, but his wounds prove too severe. His condition declines and he dies shortly afterward, becoming Chicago’s 205th homicide victim of 2013.

The “Chicagoland” producers revisit Dennis a couple of days later as the doctor does some online research into his patient’s life, learning that Jerimiah was a Navy veteran and a new father whose daughter took her first steps only hours after his murder. He speaks frankly about the steady parade of human tragedy that’s wheeled through his doors and his need to compartmentalize as a way to cope. “My world,” he says, “is all about living in people’s worst nightmares.”

Making sense of those cruel realities has propelled Dennis on a rare professional journey beyond the hospital and into the same streets walked by the people who become his patients. In addition to his demanding position as Division Chair of Emergency and Pre-Hospital Trauma Services, Dennis works a second full-time job: police officer and medical director/team surgeon for the Cook County Sheriff’s Department.

“Living in both worlds is very personal for me in a lot of ways,” he says. “If you only see what happens on one side of the hospital doors, and you don’t understand what’s happening to these people before you fix them up and send them back out, then you’re missing half of the story. You don’t know what you’re sending them back to.”

As a sworn police officer, Dennis accompanies the SWAT (Special Weapons and Tactics) team on raids or hostage-barricade situations so he can be on-site to provide immediate care to anyone injured, whether an officer or a suspect. He also participates in search-and-rescue missions and air operations, and practices what he describes as a “fledgling subspecialty” in police investigations: forensic medicine. His 2012 Chevy Tahoe is an unmarked law enforcement vehicle whose vault is equipped with both police gear and medical supplies (“Half armory and half drugs,” he quips).

The range of injuries in the field is vast, and quick action is crucial. About a year and a half ago, a man who shot himself lost all vital signs while in the ambulance to the hospital. Dennis, dressed in full body armor, opened the victim’s chest and managed to revive him. The man lived.

The uncommon duality of his career has made Dr. Dennis the subject of media fascination. He is the literary inspiration for the character of Dr. Dennis Stern in Brad Thor’s bestselling thriller “Foreign Influence.” He has been tailed by cameras from MSNBC, as well as A&E and National Geographic (for a pilot called “Chicago Trauma” that aired but was not picked up). Magazine and newspaper reporters find him an irresistible source for stories about Chicago’s hard times. A production company has worked on a film script based on his experiences.

When the producers of “Chicagoland” came calling, Dennis agreed to participate, though with some apprehension. In unstinting detail the series would lay bare the challenges facing the city, not least the epidemic of gun violence plaguing Chicago’s neighborhoods. This would be an often unflattering portrait of an urban center struggling to right the ship.

“It’s a double-edged sword,” Dennis says, acknowledging that the depiction of Cook County Hospital’s excellence in treating trauma victims also served to reiterate the city’s violent reputation. “It did make the trauma center look good and made a lot of other people doing interactional and interventional things look good. At the same time it made the city appear pretty negative as a whole, and I think that was a slap in the face, but a very timely and important slap for the city.

“‘Chicagoland’ was an important wake-up call that these problems need to be fixed. An important national discussion has to be had, not only about violence but also about access to guns and safety in the streets — all of it.”

Some kids hang out in gyms, others prowl the mall. Andrew Dennis spent a healthy chunk of his childhood in the emergency room, and loved it.

His father, an orthopedic surgeon, brought his son with him to the ER from the time the boy was 5 years old. By the age of 12, Andrew was already trained to apply casts, splint limbs and drain abscesses. About this time, on a family ski trip to Vail, his father’s knee swelled up, causing him significant pain. They headed into the ski patrol shack and, rather than accept a ride down the mountain, dad grabbed a syringe from the first aid kit, showed his son where to insert the needle, and said, “OK, tap my knee.” Andrew extracted 300 milliliters of fluid, immediately relieving his father’s discomfort, and they returned to the slopes. 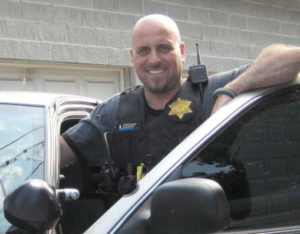 Dennis was “bitten by the public safety bug” at the age of 17 when he began working as a police dispatcher and as an EMT with the volunteer fire department in his hometown of Fair Haven, N.J. As an undergraduate at Clark University he directed the student EMS unit and furthered his training through night classes at Quinsigamond Community College. “It was one of those defining things for me,” he says. “The EMS was a big piece of my life at that time — a huge piece.”

Though he was actively recruited by the Navy and the FBI while at Clark, Dennis, a biology major, opted to do postgraduate studies in neurophysiology at the University of Pennsylvania. He went on to study medicine at the University of Health Sciences, College of Osteopathic Medicine in Kansas City, where he also managed to work as a full-time paramedic.

During his residency at Midwestern University, outside of Chicago, Dennis was treating a police officer who had been shot. While chatting with the patient’s fellow officers, he recounted some of his own public safety experiences.

“They asked if I’d be interested in being the doctor for their SWAT team. I told them I’d love to, but as a resident I was already putting in a hundred hours a week. It just wasn’t possible.”

In 2002 Dennis began a fellowship in trauma and burn surgery at Cook County Hospital and was approached by Chicago-area police officers about joining their team. Dennis pitched the idea to the department chair, who gave him the go-ahead. That year, Dennis completed the Illinois police academy as well as SWAT training and emerged with a new professional identity that married medicine and law enforcement.

Whether he’s wearing doctor’s scrubs or a bulletproof vest, Andrew Dennis is driven by a singular motivation: the preservation of life. To that end, he is an innovator, clinical researcher, author and business owner. Consider these items from a CV that extends for 19 pages:

One of Dennis’ greatest challenges is counteracting popular notions crystallized by TV and movies about what occurs when someone is shot. The truth — that one’s chances of surviving a gunshot wound are actually quite good — simply doesn’t make compelling drama, he says.

“The perception is that when Mark Harmon on ‘NCIS’ shoots a guy in the chest, he dies right there. That’s inaccurate,” Dennis says. Even police officers can buy into the pseudo-veracity of TV images, which prompted Dennis to start in-service classes to dispel the myths and teach reasonable strategies for improving one’s chances of surviving penetrating injury.

“I came up with this concept of perception leading to overreaction,” he says. “If I get shot in the chest and think I’m going to die, that’s an inaccurate frame of reference leading to an improbable answer.

Dennis professes a “soft spot in my heart” for public safety personnel — “Those individuals who face a problem head-on even when basic instinct tells you to run away.” He quotes a favorite adage used as the motto for the Air Force Pararescue team: “These things we do that others may live.”

“I think that embodies everything I strive for, and it’s what embodies the public safety sector of this country,” he says. “It’s very tragic when I have to pronounce a police officer, or take care of an injured cop, or a fireman, or a paramedic.”

His in-service sessions on surviving in the field gained such notoriety in the law enforcement community that Dennis was swamped with speaking offers from all over the country. To reach as great an audience as possible, he created Leomedicus and wrote “Officer Down.”

He’s now expanding those critical lessons to an even wider circle. Dennis is launching a new company, Citizen M.D., to teach everyone how to be self-sufficient in times of disaster or tragedy — such as a gunman opening fire in a school or in a commercial area. A key element of his Medical Tactics regimen is the Trauma Rapid Intervention Kit (TRIK), a compact kit carrying basic implements for treating traumatic injuries, to be used in conjunction with the knowledge gained from Dennis’ online courses detailing the fundamentals of survival.

The goal, he says, is to prepare people for an unthinkable situation, get them into the proper mindset to take necessary action and equip them with the tools to emerge alive.

In his “Chicagoland” interview following the death of Jerimiah Milsap, Dr. Dennis talked about the patients who haunt doctors, the ones who couldn’t be saved. “I have my ghosts,” he said. “There are patients I can flash back to — [to] that moment of seeing someone’s life snap away. Every surgeon has his or her own cemetery and visits it regularly.”

But then there are the victories. On a good day they can dull the losses, provide some reparation for the battles Andrew Dennis wages against other people’s nightmares from inside the operating room and out on the streets of Chicago — a scalpel in hand and a badge on his chest. It’s the kind of satisfaction shared by the small fraternity of men and women who mend bodies that have been broken in the most terrible ways.

One afternoon while Dennis stood outside the Trauma Unit talking to colleagues, a woman approached the group.

He didn’t recognize her at first. Then it hit him.

“She was the one patient I’ve always said should not have lived,” he says. “She had multiple gunshot wounds. She was thirty-two degrees [Celsius] on the table; she had an open abdomen and a fistula. No one should have been able to survive what she did. Yet here she was, having beaten every odd. And she walked up to me and gave me a hug.”

It was a very good day.