JACQUELYN BESSELL, M.A. ’94, PH.D. ’96, CHAMPIONS THE BARD ON BOTH SIDES OF THE ATLANTIC
By Clark News and Media Relations 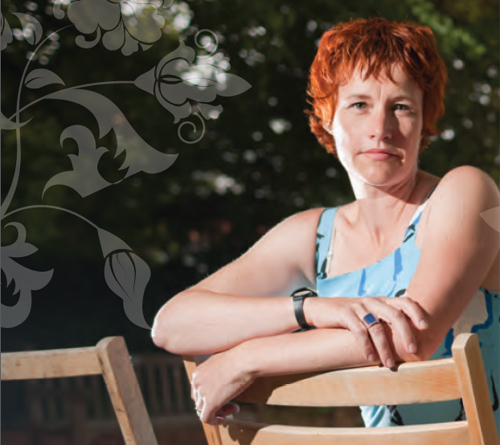 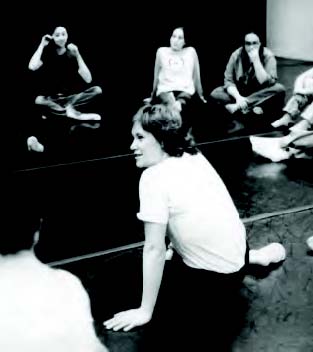 Left: In this photo from 2000, Jacquelyn Bessell leads a workshop for Clark students at a Boston studio. Window on the world Why, half a millennium later, do people around the world still find reading and watching Shakespeare’s plays worthwhile? For Bessell and her mentor Virginia Vaughan, the questions raised in Shakespeare’s works, and the ideas and themes illuminated in his prose, have remained relevant over time and across cultures. Vaughan explains how her students readily perceive parallels between Shakespeare’s plays and current events. “My students always see [Shakespeare’s plays] in terms of our own time. We did ‘Richard II’ in the Advanced Seminar, the story of a king who is so vain about his own position that he can’t see the world clearly anymore. That was during the uprising in Egypt, and President Mubarak came up again and again in discussions. Students were seeing these connections, and what happens to somebody like this. So Shakespeare is a window on the world in many ways.” Vaughan, who, with her husband, historian Alden Vaughan, wrote “Shakespeare in America,” says that in addition to the Bible, a volume of Shakespeare was one of the most popular books to accompany pioneers on the American frontier. In a more recent context, she points out references to Othello that were invoked during the Obama campaign, noting each was the son of a white woman and a black man. Shakespeare’s plays have been in almost continuous production for the last 400 years, Bessell says, adding that an understanding of how Shakespeare has been edited, interpreted and staged in other times and places can provide insight into how various cultures have wrestled with the great questions and dilemmas of life. “Shakespeare can pack so many ideas into so few words,” she says. “The stories are archetypal.” The vocabulary of movement In the 1953 Broadway musical “Kismet,” the poet Hajj, in an attempt to prevent having his hand cut off by the evil wazir, sings that “when you tell a story, amorous or gory, you can tell it best if you gesticulate.” Bessell would concur. In an essay she wrote for the book “Speaking Pictures” — which she co-edited with Vaughan and Fernando Cioni — she notes that the ability to deliver lines eloquently is not sufficient in itself to portray the full meaning of a play. Theater is a visual medium, and actors must learn to use their bodies — what she calls “physical storytelling” — as well as their voices to bring a script to life.

Bessell has observed and studied the techniques of physical theater in her capacity as head of research at the new Globe Theatre in London, and as a director at the American Shakespeare Center’s Blackfriars Playhouse in Staunton, Virginia. Both places replicate the spartan environments where Shakespeare would have seen his plays performed. And while an understanding of physical theater is key in any live performance setting, it is critical in low-tech theaters like the Globe and Blackfriars Playhouse that strive to recreate the way a play would have been staged in Shakespeare’s day. “How,” she asks, “without help of contemporary stage lighting and other recognizable technical supports, can the performances achieve shape, change pace and tempo, pull and switch focus, and guide the audience’s eyes as well as ears?” Bessell notes that in times past, actors often drew on a universal vocabulary of stock gestures, according to which parts of the body were positioned to signify emotions like anger, fear and joy. While modern acting style tends to demand more natural and less exaggerated movement, that doesn’t mean it comes easily. And while some cues describing a character’s emotional state or physical posture may be specified in a script, much room remains for interpretation. In addition to training actors how to use their bodies, Bessell has coached stunt men and women, gymnasts, dancers and martial arts practitioners to be more facile with spoken text, at places like the British Action Academy and the British Institute for Chinese Martial Arts. Her least favorite role is that of actor. Bessell confesses to suffering from stage fright, which “my students find very amusing.” At Clark she studied acting with Ray Munro, primarily so she could learn how to be a better director. She recalls only one acting experience that she truly enjoyed, that of playing Lady Macbeth opposite Gino DiIorio’s Macbeth. With a special nod to DiIorio, she acknowledges that “acting is a lot easier if your scene partner is a real pro, willing to do more than half the work for you.” Bessell credits Munro with one of the most valuable skills she learned — how to use questions to help actors make appropriate choices. “Actors can commit to choices they make themselves,” she says, “and directors who impose choices on their actors interfere with this fundamental process, to the detriment of the work.” The Clark effect Bessell cherishes memories of her time at Clark, and despite having traveled extensively throughout the U.S and U.K., she still feels her intellectual and creative community is based in Worcester. She praises her Clark faculty advisers as “brilliant people.” “My interdisciplinary Ph.D. was supported by recognized experts who nonetheless saw the value of learning from other disciplines, and from these people I learned to think outside the box,” Bessell says. “I was very lucky to find my work supported at this level, by this caliber of faculty,” she continues. “I was given the time and the means to develop as a teacher and a director. The faculty and students I collaborated with helped instill in me some core values and work ethics — intellectual rigor, creative freedom and openness to new perspectives — that have influenced just about everything I have done since.” This interdisciplinary approach has had enormous impact on Bessell’s teaching and professional work. Recently, she was commissioned to write an important new book for the Arden Shakespeare series exploring the work of major Shakespeare companies in the United States and United Kingdom. She is embarking on a three-year research project to interview prominent and emerging Shakespearean directors, actors and designers on both sides of the Atlantic. “I publish work that is informed by both a scholarly and technical understanding of how Shakespeare’s plays work in performance, as well as the practical experience of directing,” she says. “Now I can teach my students the importance of understanding the relationships between text, performer, and the audience, having had instruction and experience in all of these areas. “If I had studied elsewhere, I doubt I would have been encouraged to see the interconnectedness of different forms and disciplines in quite the same way, and my work today would be all the poorer for it.” This story was originally published in CLARK Magazine, fall 2011.