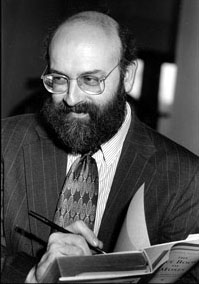 Everett Fox, Allen M. Glick Professor of Judaic and Biblical Studies at Clark University, recently returned from a world tour where he addressed English-speaking audiences in Israel, South Africa, Australia, New Zealand and the United States about his Biblical translation work. Fox plans to resume his travels with a visit to England in December. Until then, the author of “The Five Books of Moses” will undertake a U. S. book tour promoting his new volume of translation, “The Early Prophets” (the books of Joshua, Judges, Samuel, and Kings), scheduled for publication by Schocken Books on November 4.

During his trip, Fox addressed diverse audiences at universities, conferences, synagogues and study groups, where he focused on the challenges and issues involved in translating ancient Hebrew texts into modern English.

“It was stimulating to be with different audiences from different backgrounds and cultures,” he says. “People bring with them varied assumptions and experiences. Many of them have used my work over the years in their study groups.”

Fox’s approach with his listeners is to select a particular text or story, talk about the style in which it’s written, and how that illuminates a way to read the Bible.

“Among the stories that particularly engaged people were David and Bathsheba, and Samson and Delilah. They’re human interest stories, and also talk about the problems of leadership,” Fox explains. “Audiences also had questions about the historicity of the Bible and issues of interpretation. Is the Bible true? Is there one way to read a text, or are there multiple ways? These are things I often address in my teaching at Clark.”

Fox cites a three-hour session in Durban with the Bible Society of South Africa as a highlight of his tour.

“The Society is working on a translation of the Bible into Zulu, which presents all kinds of interesting problems,” he says, and goes on to describe how metaphors in the Hebrew text must occasionally be modified to carry the same message in a different culture. For example, the use of dripping water as a metaphor for something annoying doesn’t make sense to water-challenged Zulus. It was replaced by “a cockroach in the ear.”

Fox explains that, in addition to rendering text into English, he also tries to impart a flavor of the original Hebrew. When addressing an audience, he will sometimes read from the original Hebrew to convey its sounds and rhythms. One of his goals is to render Hebrew into English so that people reconsider the meaning of familiar passages.

“Most translators, in order to make the translation read smoothly, try to give the impression that the work was written originally in English,” he says, “whereas I try to retain what I can of the voice of the Hebrew original, which has its own idiom, its own way of speaking. At the same time I put a lot of weight on the sound of the text. The names, the plays on words, and certain repeating words are often keys to understanding what’s going on. I try to reproduce as much as I can of that, so that instead of reading quickly, the reader stops short and says ‘What’s going on here? Why are they doing that?’ It’s very much analogous to a performance of a piece of music or a play that you thought you knew, but now you hear or see something different.”

Visit Fox’s website, where you can listen to him read from the the original Hebrew.

Everett Fox is author of “The Five Books of Moses: Genesis, Exodus, Leviticus, Numbers, Deuteronomy” (Schocken Books, 1995), and “Give Us a King! Samuel, Saul, and David” (Schocken Books, 1999), a translation of the book of Samuel. He is interested in how the Bible has been transformed at each stage by generations of Israelites, Jews, and Christians, and teaches courses in which texts serve as windows to the attitudes and concerns of Jews through the ages. He served as a religious consultant on the animated film “Prince of Egypt,” and has collaborated with an American-Israeli artist, Schwebel, who set the David stories against the backdrop of late twentieth-century Jerusalem and New York.