A Force for Change in a Time of Conflict 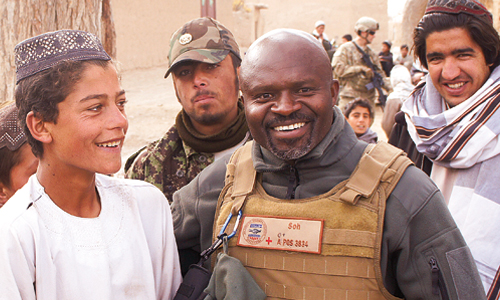 Andre-Guy Soh, M.A. ’05, has worked in some of the most dangerous places on the planet, from a combat outpost in Afghanistan to Congolese villages living under the threat of terrorist attack. Today, as a Peace and Stability Officer at USAID, Soh assists struggling communities to forge civic connections, improve infrastructure and cultivate peace in the shadow of chaos.

Growing up in one of the poorest neighborhood of Yaoundé, Cameroon, Soh was no stranger to hunger and diseases like malaria and typhoid, which were rampant yet preventable. He knew the problem was not Cameroon’s poverty, but its management. “All the resources went to feed the few who controlled the reign of the state,” says Soh. “I knew then that I should champion transparent government. People had to be told certain truths about issues like spacing births and AIDS through smart and culturally appropriate interventions. That’s why I chose to work in international development.” Soh realized his ambition to pursue graduate studies in Clark University’s Department of International Development, Community and Environment. “Being able to tailor my academic path and have a pool of professors who had been international development practitioners themselves only added to Clark’s appeal,” he says.

After earning his master’s degree in 2005, Soh went to work in some of the globe’s most perilous regions. As program director at Mercy Corps in Sudan (before the independence of South Sudan) he helped set up civil-society organizations, teaching them to interact with local elected officials, conduct advocacy campaigns, organize peace-building events between rival tribes, and participate in elections. In the town of Kurmuk, he led his team to launch the first village savings and loans program, and, in close collaboration with the Ministry of Energy, renovated a 20-year-old generator and installed power lines to provide electricity to about 1,000 households. In 2011, Soh joined the U.S. Agency for International Development (USAID) and was assigned to Deh Yak, a small village approximately four hours south of Kabul, Afghanistan.

Over the next 20 months, he built a relationship with the local governor by mentoring and training his staff. “I advised military commanders on the best use of their funds and educated them about the complexities of religion, politics and ethnicity in my area of intervention,” says Soh. By the time he left at the end of 2012, Deh Yak had a functioning administration and attendance was rated at 70 percent, which was rare even in Kabul. Deh Yak was the first district to be handed over to full Afghan control in the summer of 2012.

Soh accepted a position as a Peace and Stability Officer in Kinshasa, Democratic Republic of the Congo, in May 2013 where he is responsible for several USAID-funded projects.

He also manages a public-private partnership with a local phone company that set up low-cost cell towers in the region to reduce isolation and improve the warning systems.

In addition to his other responsibilities, Soh also oversees an USAID grant to UNICEF that provides children released from armed groups in eastern DRC with temporary shelter, psychosocial services and skills training to facilitate their reinsertion into society.

“Growing up I saw people work really hard, but still live poor lives in makeshift huts that often crumbled after heavy rains,” Soh says. “There was no hope. I also saw a lot of ignorance around me, like people thinking they could have a lot of children and then just wait for God’s assistance afterwards. That prevalent thinking never made sense to me. That is why I chose this field of work. It’s been a great voyage so far.”