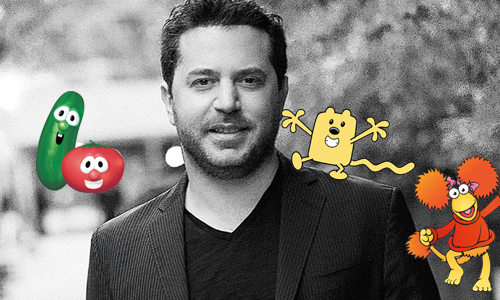 If you’re the parent of small children, names like Strawberry Shortcake, Wubbzy, and Foofa are probably part of your vocabulary. And if your child has embraced any of these characters as a new best friend, you might want to know about the apps by Cupcake Digital, brainchild of Brad Powers ’96, M.B.A. ’97.

Powers, along with Cupcake’s president, Susan Miller, co-owner of the Emmy Award-winning animated television series “Wow! Wow! Wubbzy!,” has assembled a team of professionals to create apps that both engage and educate children from preschool to the early elementary grades.

Powers credits son Lucas, then age five, as playing a significant role in Cupcake Digital’s genesis.
“As the parent of a young child, I wanted to produce apps that would make my kid smile, but also offer educational moments. There just weren’t enough of them out there,” Powers says on his website. ”I saw a great opportunity — one that was personal to me — to enter a new marketplace.”

Powers, who majored in psychology, is sensitive to unresolved issues surrounding the appropriateness of digital screen time for young children.

“We preach shared screen time with kids,” he says, “not the use of mobile or tablet devices to babysit. We encourage people to use our apps with their kids.”

Cupcake Digital has created guides for teachers and parents on using the apps with their free, downloadable worksheets and activities. “Cupcake retains on staff an expert who was in charge of implementing common core curriculum standards for her school district in California.” Powers explains. “She makes sure that anything educational is thoroughly vetted and tied to common core state standards.”

Cupcake Digital has acquired rights to a variety of children’s entertainment properties, including Strawberry Shortcake, Dreamworks, and a variety of movies.

“Our goal is to be the dominant independent force in the children’s app world,” Powers says. “Though a combination of organic growth and acquisitions we think we can achieve that position.”
Sweet.