Millennials with kids? They’re loving it 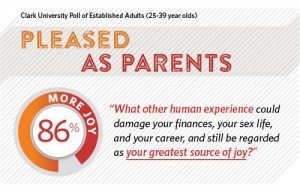 A remarkable 86 percent of 25- to 39-year-olds with children say “more joy” is a consequence of being a parent, according to the new Clark University Poll of Established Adults.

Clark University, the nation’s leading institution tracking the development of Emerging Adults (18 to 29 years old), recently released its first poll of Established Adults (25 to 39 years old), which shows a generation whose lives are deeply connected to children, parents, friends and co-workers.

“What other human experience could damage your finances, your sex life, and your career, and still be regarded as your greatest source of joy?”

Among the 1,000 established adults surveyed nationwide, 52 percent are parents. Among the parents, strong majorities said being a parent brings “more meaning to life” (85 percent) and “greater intensity to life” (77 percent). On a list of 14 possible sources of enjoyment, “relationships with my children” ranked higher than anything else, named by 96 percent of parents. Only 15 percent said they felt being a parent means “less fun.”

The poll also revealed some to-be-expected strains associated with parenthood, with many young parents surveyed reporting “more financial stress” (66 percent) and “less frequent sex with my spouse or partner” (51 percent). Nearly half (47 percent) agreed with the statement “I have had to give up some of my career progress due to the responsibilities of raising children.”

Yet, in spite of the drawbacks, “parents are amazingly positive about being parents even though they report substantial negative consequences,” said Clark University Research Professor of Psychology and Poll Director Jeffrey Jensen Arnett, Ph.D., who coined the term “emerging adulthood”— the phase of the life between adolescence and full-fledged adulthood. “What other human experience could damage your finances, your sex life, and your career, and still be regarded as your greatest source of joy?”

Overall, having kids strengthens rather than undermines couples’ relationships, the poll suggests. Those surveyed were more likely to report that being a parent means “stronger relationship with my spouse or partner” (68 percent) rather than “not as close to my spouse or partner” (25 percent). The Clark University Poll of Established Adults employed a mixed-mode methodology with a margin of error of +/- 3.06 percent. For more information, please visit www.clarku.edu/clarkpoll.

Read the Clark magazine feature: “The Kids Are All Right (their parents, too)”