Community Thrift Store reopens in grand style to ‘Save, Grow, and Give. Together.’

A core of dedicated and passionate Clark students, with the enthusiastic support of the Clark administration and mentors, reopened the Clark Community Thrift Store in a new location and with a renewed mission: “Save, Grow, and Give. Together.”

The not-for-profit, student-founded and student-run business serving the Clark and Worcester communities held a grand re-opening on Sept. 5at its new storefront at 930 Main Street in Worcester, not far from the University Bookstore and several popular eateries and shops.

Clark President David Angel joined a spillover crowd who had gathered to help celebrate the reopening. Before leading a ribbon-cutting ceremony, Angel spoke about the store’s history and extolled its mission. He said the Thrift Store’s history “reflects Clark University at its very best,” and that its original mission continues to “make a fantastic impact on our community, not only in terms of our environmental footprint, but also in terms of how we engage with the community on our campus – our students, our faculty and our staff – and out in the world.”

The first Thrift Store was razed last winter after the City of Worcester discovered structural damage in the adjacent church building and ordered the demolition of the property for safety reasons. After the closure, the Thrift Store operated “pop-up stores” around campus and above the University Bookstore. 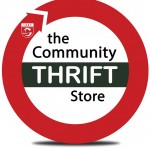 The new location features a new aesthetic based on the research and work of Lloyd Schramm ’16. Schramm spent the summer working on a LEEP Project with Sustainable Clark. He researched shop’s history, identified its core values and learned more about the world of “thrifting.” He collaborated with the store’s management team, Geory Kurtzhals GSOM/IDCE MBA ’15; Jeff Stanmyer ’14; Robert (Gus) Meissner ’14; and several other Thrift Store employees to redesign the entire look and feel of the store.

At the grand reopening, Jenny Isler, director of Sustainability at Clark, offered heartfelt remarks to the students: “We are so honored to have worked with you, learned from you, and created this beautiful, beautiful thing that is the Community Thrift Store, through LEEP Projects, through mentoring, through watching you overcome obstacles and continue to act sustainably toward the planet, toward our neighbors—being the leaders to further develop the culture at Clark of ‘Reduce. Reuse. Recycle.’ ”

Amy Whitney, director of the Innovation & Entrepreneurship program and LEEP adviser, also expressed her appreciation of the students’ “entrepreneurial spirit that is ingrained and embedded in all Clark students.”

Whitney presented to the student team a framed portrait of the original storefront, including a formal listing of all the students who have played a part in the store through the years.

The Clark Community Thrift Store was created by Clark students Rachel Gerber ’11 and Alexa Lightner ’11, who won a grant from the Innovation & Entrepreneurship program’s U-Reka! Big Idea Contest. After observing the amount of perfectly good items students threw away during move-out time, the two envisioned a way to increase Clark’s sustainability by capturing the items for resale in a store that would serve the community, rather than sending the items to a landfill.

Since its opening in 2010, the Thrift Store has diverted approximately 30 tons from landfills by collecting donations from Clark students and employees for resale to members of the Clark and Worcester communities, creating significant savings for their customers and becoming a Clark landmark as they fulfill their mission.

“You have truly done something that is going to last and that will make a lasting difference,” Angel said.