New Clark Poll finds millennials grown up, getting by, and OK about turning 30

“Established adults do not lose their optimism and sense of fun and freedom, even as they take on the responsibilities of adulthood,” said Clark University Research Professor of Psychology and Poll Director Jeffrey Jensen Arnett, Ph.D., who coined the term “emerging adulthood”— the phase of the life between adolescence and full-fledged adulthood. 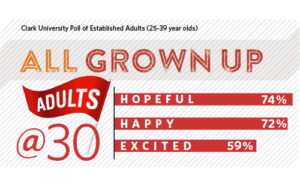 Despite diminishing youth and added responsibilities, nearly three-quarters of the established adults surveyed said that their lives are fun and exciting. Seventy-one percent said they feel they have reached adulthood. Seventy-four percent are married or in a close relationship, and 53 percent have at least one child. Only 17 percent reported living alone, and most did NOT rank work, family responsibilities or even financial worries as their main sources of stress. The top stress-producer? “Too much to do and not enough time to do it all” (63 percent).

The Clark University Poll of Established Adults found respondents in this age group holding fast to the optimism expressed by emerging adults (ages 18-29) polled in 2012. Eighty-three percent said they are confident they will “get what I want out of life,” (compared to 89 percent of the 18- to 29-year-olds who expressed the same belief when surveyed in the 2012 Clark Poll). Sixty-one percent of the established adults polled indicated a belief that, overall, their lives will be “better than my parents’ lives have been,” nearly as strong an optimism as the younger set in 2012, 77 percent of whom said they expected to out-do their moms and dads.

The Clark University Poll of Established Adults employed a mixed-mode methodology, with a margin of error of +/- 3.06 percent. For more information, please visit www.clarku.edu/clarkpoll.