Forbes: Clark among ‘Top Colleges,’ No. 66 in Northeast, 68th in Research Universities 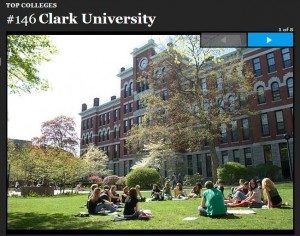 Clark University appears in Forbes’ annual “America’s Top Colleges” report, at No. 146 on the list of 650 schools recognized this year.

Besides the overall ranking, Clark is ranked No. 114 among Private Colleges, No. 68 in Research Universities, and No. 66 in the Northeast.

This is the seventh year Forbes has partnered exclusively with the Washington, D.C.-based Center for College Affordability and Productivity (CCAP) to compile rankings that focus on quality of teaching, great career prospects, high graduation rates and low debt levels.

Forbes’ rankings are based on five general categories:  post-graduate success (32.5%), which evaluates alumni pay and prominence, student satisfaction (25%), which includes professor evaluations and freshman to sophomore year retention rates, debt (25%), which penalizes schools for high student debt loads and default rates, four-year graduation rate (7.5%) and academic success (10%), which rewards schools whose students win prestigious scholarships and fellowships like the Rhodes, the National Science Foundation and the Fulbright or go on to earn a Ph.D.

The rankings can be found at https://www.forbes.com/top-colleges/list/.