Scott Rechler ’89 returned to Clark University as the featured speaker at the May 16 Reunion Dinner where he lauded his alma mater’s willingness to compel change and stressed the ongoing need for leaders to follow their moral compasses when making decisions.

Rechler, the chairman and chief executive officer of RXR Realty LCC, is a major force in the world of Manhattan real estate, and as vice chair of the Port Authority of New York and New Jersey he has helped oversee the successful redevelopment of Ground Zero.

Rechler began his presentation by recapping some of the pivotal moments that occurred during the years he spent at Clark, 1985 to 1989. The communications revolution was dawning as Microsoft went public, the first text message was sent, and the first GPS satellite was launched; the Berlin Wall fell and Chinese troops fired on protestors at Tiananmen Square; the first Starbucks opened in Seattle and Tom Cruise dominated the box office in “Top Gun.”

Technology “made the world faster, flatter, more connected and more complex,” he noted, and it both empowered and polarized people. 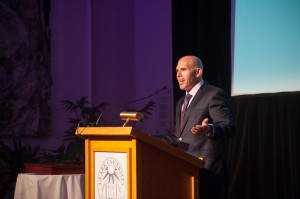 Clark prepared its students for the coming 21st century by broadening their perspectives, cultivating a sense of community and providing lessons in leadership, Rechler said. Clark exposed him to diverse groups of people with multiple views and opened his eyes to “how the world works.”

On a personal level, Rechler related a story about how he and his first-year roommate seemingly had nothing in common, yet they bridged their differences to remain roommates for four years. He also recounted his first date with classmate Debby Feldstein ’89, drawing laughs from the audience when he flashed a photo on screen of the couple at Clark that he likened to the characters of Elaine and Jerry from the “Seinfeld” show. Debby would go on to become his wife and give him “a sense of balance and a sense of family values that I wouldn’t have if I hadn’t met her here.”

Rechler said his company brings a similar sense of civic responsibility as it revitalizes urban communities and restores Manhattan landmarks to their former glory. He also opened the Center for Social Innovation, which brings together profit and not-for-profit entities to collaborate on social-justice initiatives, and he and Debby created the Starfish Foundation to coalesce efforts to improve conditions in struggling areas of the world.

Thanks to technology and the shifting nature of the economy, traditional top-down leadership has given way to more individualized empowerment, he said.

“Clark was a place where we all could be leaders,” he recalled. “It explained to us that the world is not simple; it’s complex. You have to be analytical and you have to think about things as they come at you. … And as the facts change, your approach to life needs to change.”

But what’s been lost in many cases are the values and ethics that promote long-term thinking and drive decisions that benefit the greater good, Rechler said.

He criticized the “win-at-all-costs” mentality permeating society, citing recent scandals like the New Orleans Saints coach offering his players “bounty” for injuring opponents, and the closing of traffic lanes leading to the George Washington Bridge in New Jersey as political payback.

“There is an unfortunate trend where success is more important than anything else that could be in front of us, and we do what we do to win. What surprises me in these situations is nobody stops and says, ‘Wait a minute. This doesn’t make sense.’ It highlights a deficiency in moral character and a sense that we all have an obligation to live to a higher standard.” In his Port Authority role, Rechler has been closely involved with the redevelopment of Ground Zero in New York City — a “sacred site,” he noted — including the newly opened 9/11 Memorial Museum and One World Trade Center, which dominates the Lower Manhattan skyline. He recounted the events in the aftermath of Superstorm Sandy in 2012, when workers worked around the clock to pump out 150 million gallons of water that had flooded the construction site.

“They did this knowing their own homes burned down, flooded, or were without electricity and their families were there,” he remembered. “They looked at it as more than job; they looked at it as a mission. It was very inspiring to see the leadership at every level, from the foreman to the steelworker to the guy working the pump.”

Concluding his remarks, Rechler lauded Clark for continuing to fulfill its own mission as a university that “creates contributing citizens of the world.”