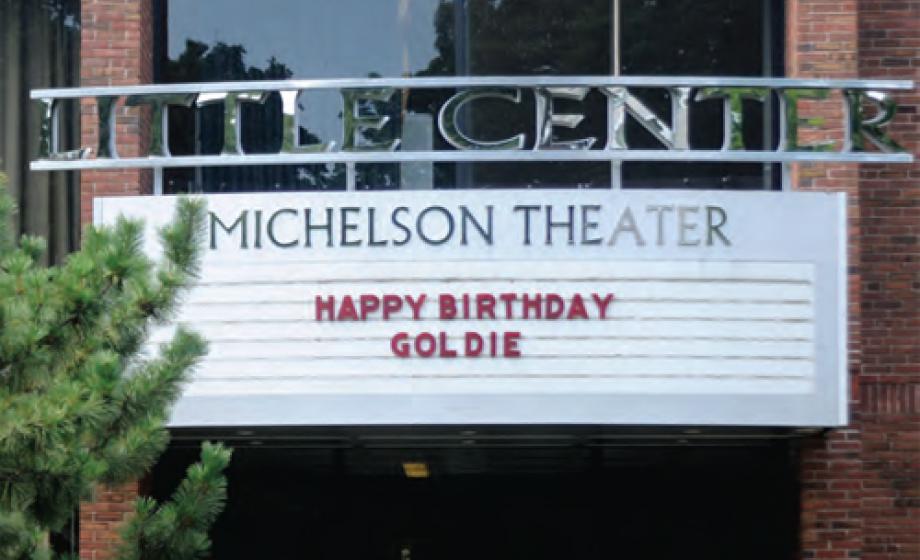 It is the standard reporter’s question, posed to anyone who has turned 100 years old: What is the secret of your longevity?

Goldie Michelson, M.A. ’36, doesn’t flinch when asked, and why should she? At age 110, she’s had the opportunity to answer this same question for 11 consecutive years.

“Walking,” she says while sitting in a comfortable chair in her Worcester home. “I was a great walker—four or five miles every morning, weather permitting. I never used a car if I could walk. One of the great joys of life was when I sold my car.”

Her son-in-law, Leonard Minsky, seated nearby, pipes up. “Goldie, what about the cigars and whiskey?”

She laughs and waves her hand. “He’s just kidding. I never smoke or drank.” Then she adds in a semi-conspiratorial tone, “But I do love chocolate. Lots of chocolate.”

Now that her secrets are out, Goldie Michelson can rest assured there are readers of this story who at this very moment are lacing up their walking shoes or rifling through the cabinets for a Hershey bar. Naturally, she has slowed in recent years—the eyesight and hearing have diminished, and while she can still walk, she needs to hold onto someone for balance. But otherwise, Goldie is in remarkable health.

To truly put Goldie (“Everybody just calls her Goldie,” daughter Renee Minsky observes) into perspective, you need to place her in historical context. Here’s a woman who, when she was born in Russia in 1902, entered a world in which the Wright Brothers had not gone airborne at Kitty Hawk, Theodore Roosevelt occupied the Oval Office, and Civil War veterans were marching in Memorial Day parades.

Her father, Max Corash, was a medical student in Russia, married with three young children, and he needed to pass only one more exam to open his own practice. Max had already served in the military, but the Russian army needed doctors and notified him that he would be reenlisting.

“He said thank you very much and packed his bags,” Goldie says. Her father immigrated to Worcester, where his two brothers and a sister had been living since 1885. Six months later, when the youngest of the three Corash siblings was old enough to travel, his wife and children joined him in the city. Goldie was two years old at the time.

Max Corash pondered returning to medical practice, but he was dissuaded by a local doctor, a bachelor, who served the growing immigrant community. He advised Max that medicine was no profession for a family man. “If you deliver a baby, they may send over a chicken or invite you to their home for dinner,” the doctor said. “I promise you that you will never make enough money to afford a wife and three children.” Instead, Max opened a successful dry goods store in the Water Street section of Worcester.

Goldie attended city schools, where she threw herself into the theater—whether it was acting, finding costumes, or working the lights. By the time she was a freshman at Classical High School, Goldie’s passion for the stage was so well established that one Friday afternoon the chairman of the English Department stopped her in the hallway, handed her the 19th-century poem “Lasca,” and informed her that she would be reciting it from memory at Monday’s assembly. “It was a long poem,” she says. “I went home and memorized it over the weekend.” Not only did Goldie nail her performance, but to this day she can recite “Lasca” verbatim.

Goldie attended Pembroke College (which later merged with Brown University), graduating with a sociology degree in 1924. She returned to Worcester and secured a $25-a-week job at Worcester State Hospital. When she informed her father about her newfound employment, he took $25 from his pocket and told Goldie that he would pay his “little girl” the same sum if she didn’t accept the position.

“My father was old-fashioned in that respect,” she says. “He was not happy that the job was at the state hospital, and that it was mostly men working there. He didn’t think it was a proper place for a girl.”

Goldie didn’t take the job, nor did she take her father’s money. That first summer out of school, she headed to the tennis courts to play against her brother, Harry Corash ’21, who had starred at Clark. (Harry later endowed the Corash Tennis Courts near the Dolan Fieldhouse.)

One night, Goldie’s brother, Jack, brought home to dinner a young man named David Michelson, whom he’d met swimming at the YMCA. David had been working in Worcester but was leaving the next day to return to his home state of New Jersey. He wasn’t thrilled with Worcester, and he was lonesome. Then he met Goldie.

“He said when he saw me walk down the stairs he had to get to a phone, because his plans had changed. He knew he wasn’t going home,” she recalls.

Goldie married David, who fashioned a successful career developing medical office buildings, and they had a daughter, Renee. She loved her family, but life as a homemaker bored Goldie.

“I said to my husband, ‘I really should get a job or something.’ And he suggested I go back to school.” Goldie enrolled at Clark University and went on earn her master’s degree in sociology. Her thesis, “A Citizenship Survey of Worcester Jewry,” examined the reasons why many of Worcester’s older Jewish residents chose not to pursue American citizenship. “I found that they were scared to death of the language, and never believed they would be able to learn it,” she says.

In the basement of Goldie Michelson’s Worcester home are the remnants of a theater. On a small raised stage she taught neighborhood children to perform, illuminated by footlights that still peek through the dust and cobwebs. Costume changes were made in a laundry room that doubled as a dressing room, complete with a star on the door.

Passion for the theater has been central to her life. When Goldie learned she was pregnant with Renee after she’d landed the lead role in “The Importance of Being Earnest,” her mother let out her costumes and the show went on. (Nature and nurture alike clearly played a role in shaping Renee’s career as a longtime drama teacher in the Bangor, Maine, public schools.)

Goldie and David made regular pilgrimages to New York City for Broadway marathons—seeing as many as four plays in a single weekend. She still recites passages from her favorite Shakespeare plays, never tiring of the Bard’s magical words.

She spread her love of theater to children and adults in schools, clubs and, well into her 90s, to senior citizens in area nursing homes. She taught her students the elements of drama and music, and how to speak publicly without fear and anxiety.

“I can’t remember when I wasn’t coaching a play,” she says. “That’s when I was happiest—when I had my hands on a production.”

The lone problem Goldie encountered in her directing career was finding a venue for her productions. Fortunately, Clark University offered her unfettered access to Atwood Hall.

“Clark never turned me down, never refused me,” she says. “I was always grateful for that.” The feelings are mutual. In her will, Goldie has supplied generous funding for future renovations to the Little Center Theater, since renamed Michelson Theater on the gleaming marquee installed in 2009. She has also endowed the David and Goldie Michelson Drama Fund, which for the last 10 years has provided support for many theater programs.

“We have brought in touring troupes and guest lecturers, organized field trips and run special classes, and last year we used the fund to commission a new full-length play to be developed with Clark students,” says Gino DiIorio, professor of theater at Clark. “Goldie Michelson and the Michelson family have been invaluable to the theater program. She is a true theater friend and a great benefactor to Clark University.”

Goldie Michelson is presumed to be Clark’s oldest living alum, and her connection to the University is multi-generational—her great granddaughter, Deanna Minsky, is a junior here. [Editor’s note: Deanna graduated in 2014.]

Her remarkably full and long life even surprises Goldie a bit, pleasantly so. “It never occurred to me that I would live this long,” she says. “I just went on and on, and I’ve loved it.” On August 8, Goldie Michelson celebrated her 110th birthday at home with family and friends. The cake, of course, was chocolate.

Editor’s Note: This story was originally published in CLARK Magazine, fall 2012. Goldie Michelson passed away in 2016 at the age of 114.