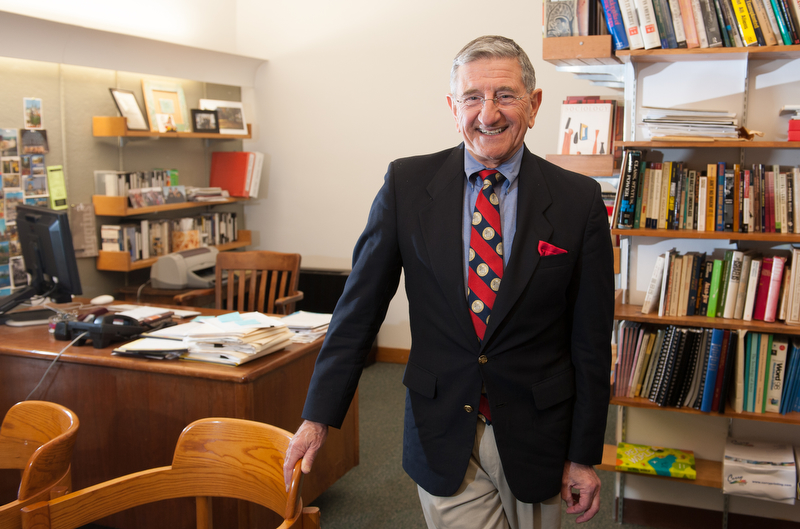 Within days of his formal retirement celebration last December, sociology professor Robert J. S. Ross published a letter to the editor of The New York Times about taxes and sweatshops and penned a Huffington Post column on yet another factory fire in Bangladesh. Earlier in the year he’d placed an op-ed in the Milwaukee Journal Sentinel challenging American clothing retailers to “put up or shut up.” That flurry of public commentary is a small reflection of Ross’ decades of scholarship, teaching, and outspoken agency on such issues as social justice, political accountability, free speech, fair labor, and civil liberties. Ross’ civil libertarian leanings can be traced to his upbringing in the Bronx, near Yankee Stadium, and the influence of his hard-working mother, a schoolteacher, and father who was a garment worker. But the tumultuous ’60s were where Ross earned his activist stripes. As an undergraduate at the University of Michigan, he became a founding member of the famously radical Students for a Democratic Society, for which he was vice president from 1961-’62. He is featured in “Rebels with a Cause,” a documentary “about the hopes, rebellions, and repression of the 1960s as told by members” of SDS.

Ross went on to the University of Chicago for his master’s degree and later a Ph.D. (He was also suspended twice for participating in Vietnam War demonstrations.) Following a decidedly left fork on his academic path, he arrived at Clark in 1972. “I thought that academia was a politically relevant place to be,” he says. “Clark wanted me because I was a scholar-activist — because of my commitment and involvement in social justice.” Not all was smooth sailing, however. For years he confronted a conservative administration, which balked at granting Ross tenure. A petition campaign garnered signatures from a wide majority of the campus population and, with key collegial support, he gained tenure. “My relationship with that cadre of students is a high point of my career,” Ross recalls. “A lot of them became lifelong friends.” 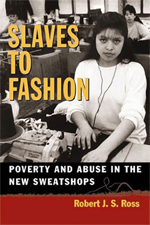 Since the mid-’90s, Ross has been at the forefront of scholarly research into the resurgence of sweatshop conditions and global impact of the U.S. apparel industry, becoming a go-to expert and frequent lecturer on practices, labor rights and international trade. Beyond teaching and lecturing on the subject, Ross served as vice president of the Sweatfree Purchasing Consortium. His academic work around this issue culminated in the publication of his seminal book, “Slaves to Fashion: Poverty and Abuse in the New Sweatshops,” in 2004.

Above: Ross talks about poverty and abuse in the new sweatshops Among the Clark high points Ross cites are his two terms as the elected chair of the Faculty Assembly. “I deeply believe in democracy, and faculty members are offered the unique opportunity to be self-governing. So, to participate and help lead that was a deeply gratifying task to me.” Ross directed Clark’s International Studies Stream and helped to establish the program in Urban Development and Social Change. He also has been a consultant to Boston’s economic development agency, the Massachusetts Department of Welfare, and a speechwriter and policy adviser in the Massachusetts State Senate. At his retirement send-off, Ross, 71, said, “This is a workplace where the producers were largely self-governing; where the community regularly expects civil debate over major issues; where global citizenship has been an everyday assumption. I am so fond of it that I am not in fact completely leaving. I’ll teach a very little, write a lot and make use of the grand title of Research Professor and drop in to see you between ski trips.” At the time of this writing, Ross was, in fact, vacationing on the slopes in southern France. Still, from there, he managed to submit a letter to the editor — this one to The Boston Globe, chiding the federal government for not complying with global labor standards. His work continues. “People often remark when they learn I have been at Clark for so many years, that ‘you must love it.’ For many years my response was, ‘Well, it’s not a marriage, it’s a job.’ “But in the last few years I have tended to say I like it more and more. Perhaps that is just egocentric; it has become more like what I wanted it to be all along. Globally aware, community committed, invested in experiential education, proud of its egalitarian values. What’s not to love?” This article was originally published in CLARK Magazine, spring 2014.

Note: Bob Ross will participate in a symposium on Saturday, May 17, at 2:30 p.m. in Johnson Auditorium, Arthur M. Sackler Sciences Center. In addition to Ross, “The Long March: A Sociologist’s Journey from Port Huron to Clark” will feature commentary from Neil Leifer ’76, Harry Grill ’79, sociologist and former Students for a Democratic Society comrade Richard Flacks of UC Santa Barbara, and former State Senator Gerry D’Amico. Ellen Carno ’79 will chair the panel. Read Bob’s story below. Ensuring his Clark legacy, alumni, colleagues, friends and family have created a permanent endowment for the Robert J. S. Ross Social Justice Fund. The endowment will support stipends for undergraduate social justice internships with an organization or other entity whose principal mission is to promote social, economic or environmental justice. To contribute, contact Carole Allen Scannell, University Advancement.