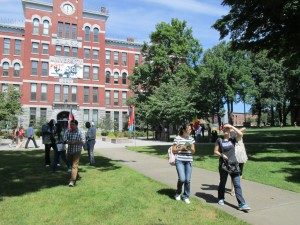 A record 7,291 students applied to become members of Clark University’s Class of 2018, representing a 31 percent increase over last year’s numbers and an astounding 70 percent rise over two years.

The Office of Admissions called in all hands — and some pinch hitters — to handle the massive workload, spending long days, nights, and weekends ensuring that each applicant was properly considered for the 620 available spaces.

Don Honeman, Clark University dean of admissions and financial aid, attributes the dramatic increase in applications to a number of factors, among them a revitalized campus visit program; effective marketing/recruitment and branding initiatives; the adoption of a test-optional policy; increased guidance counselor engagement; the enduring allure of the fifth-year tuition-free master’s degree program; and the appeal of Clark’s innovative approach to undergraduate education, Liberal Education and Effective Practice (LEEP).

The soaring volume of applications means the University’s rate of admission moved to nearly 50 percent, compared to 70 percent of all applicants in 2012. Of the applications received, 3,833 students were offered admission.

“It’s all about fit,” Honeman says, who notes that prospective students who embrace Clark are typically responding not only to the University’s range of academic offerings, but to its campus culture as well.

He notes that the number of applicants rose across the board in terms of academic strength, the number of geographic areas represented, the array of socioeconomic backgrounds, and ethnic and racial diversity.

Honeman says it’s difficult to pinpoint a specific factor driving the spike in applications. He points to marketing efforts “that have put us on the radar screen in places where we’ve never been recognizable” and a reimagined campus visit, in which the Admission Office’s student ambassadors engage prospective students and their families on a more personal level by connecting the campus tour to their own Clark experience.

“What we’re trying to do is highlight what is unique and different about Clark so students will self-select whether we’re the right choice for them,” Honeman says. “We’re showcasing with our own students what it really is to be a Clarkie, so prospective students will either say, ‘That’s me’ or ‘That’s not what I’m all about’ and will self-select in way that keeps Clark what it’s always been with an even richer pool of talented students.

“Both on the Clark campus and in recruitment activities around the country, our extraordinary admissions staff, enthusiastic alumni volunteers, and committed Clark Student Ambassadors together have forged an incredibly effective team that has driven these remarkable results.”

The campus visit at Clark is very different from those at other schools, right down to the opening informational session inside the Bassett Admissions Center, says Brian Hanna ’10, assistant director of admission.

“We start out with the assumption that [the session] isn’t the place to deliver a lot of information,” as prospective students and their parents have typically researched the universities beforehand, he says. “It’s mostly representational of the Clark experience, and we showcase our students in the info session.”

Indeed, halfway through the information session admissions counselors leave the room so that prospective students and their families can have uncensored conversation with three Clark student ambassadors.

“We empower our ambassadors to share their experience in ways no other place does,” Honeman says. “We don’t script them. Families can pick out a scripted answer if they hear one.”

Targeting new niche markets outside of the Northeast also has contributed to the increased application figures this year, Honeman says. Among the geographic areas of focus are Chicago, the Pacific Northwest (Portland, Ore., and Seattle), the San Francisco Bay Area, Washington, D.C. and Austin, Texas. Inroads also are being made in Miami and Minneapolis.

“All of those cities have significant numbers of high school students who, on their SAT test surveys, indicated that they had a willingness to go outside their own state for college,” Honeman says, adding that these are locales where the Clarkie culture may resonate.

LEEP by itself isn’t necessarily the primary thing that lures prospective students to Clark, but once they’re on campus for a visit, “it helps seal the deal,” Hanna says. While talking about LEEP during information sessions, he sees parents nudging their children when they hear how Clark prepares its students for life beyond college and connects the curriculum to real-world experiences. “That’s a turn-on for parents,” he says.

Another incentive is the LEEP Scholarship. The University received about 1,600 applications for the scholarship, which awards full tuition, room and board, and is offering the scholarship to five exceptional students. Four students in the class of 2017 (current first-years) are enrolled under the LEEP scholarship.

The Accelerated B.A./Master’s Program, which offers a fifth-year tuition-free master’s degree for qualified students, is not new, but “it’s a huge attraction,” Honeman explains.

“The lion’s share of our work is finding way to differentiate Clark from other colleges,” he says. “LEEP and the fifth-year-free program help us make our case to confused families that are at the point of thinking that every place looks and feels the same.”

The deadline for admitted students to enroll at Clark for fall 2014 admission is May 1.