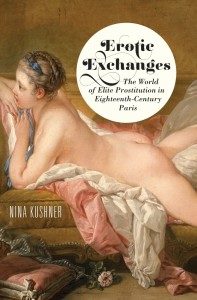 “I stumbled on the files on kept women when I was going through the secret police archive in Paris,” Kushner said. “After a day or two of reading them, I was hooked. It was clear that the archive was incredibly rich, and would yield a great deal of information about these women, the men who bought their services, and the police who watched it all. I had no idea just how rich the archive was until I actually wrote the book.”

“Nina Kushner rekindles discussion of a historical population for which we have a great deal of documentation. Because of police surveillance, the dames entretenues of 18th-century France can be followed in all phases of their work lives. The result is a textured and nuanced picture of possibilities and limitations for these women in their historical setting,” writes Katherine Crawford, author of “The Sexual Culture of the French Renaissance.”